Oh no! Someone has broken into the Hall of Fiction and absconded with a collection of the world's most cherished literature! Now a group calling themselves the Illiterati are going into these timeless classics themselves and making dreadful changes to the stories, potentially changing forever some of the best loved books of all time! All would most certainly be lost, but thankfully we have the Fiction Fixers to call upon. 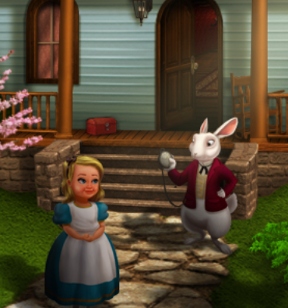 In the hidden object adventure Fiction Fixers: Adventures in Wonderland, you play a fresh-faced cadet for a kind of secret police force tasked with protecting the integrity of the collective literature from around the globe. With the recent break-in at the Hall of Fiction, you'll finally have a chance to go on your first real live case. Your assignment? To follow an Illiterati agent into Lewis Carroll's beloved children's story, Alice's Adventures in Wonderland, and undo all of his mischief.

Even though this is your first case, there's no need to be nervous, as Fixer Phoebe will be right by your side to help you out and give you direction when you need. The two of you will follow Alice as she begins her adventure down the rabbit hole. Only, while she is off trying to find the Queen's rose garden, you'll be busy fixing the errors left by the Illiterati agent such as removing all the sharp instruments left in the bed of leaves at the bottom of the rabbit hole. Fixing the fiction centers around using your object finding skills in hidden object scenes, building up your inventory and solving relatively simple item-based puzzles, and testing your wits and reflexes in a selection of mini-games.

So stay sharp. It's up to you to make sure Alice finds the White Rabbit's gloves, the mad tea party goes off without a hitch (or, at least, with only those hitches we already know about), and that the Duchess makes it to the croquet game. Speaking of croquet, I do hope you are handy with a flamingo.

Analysis: Fiction Fixers jumps onto the scene with a fresh and intriguing story concept that is brilliantly delivered. While the gameplay might not live up to the originality and ambition of the plot, it does offer solid meat and potato object finding and some mini games that, if not exactly unique, are nevertheless fun and given enough of a twist to make you smile. 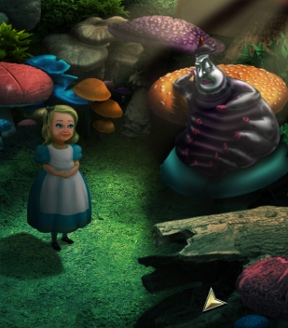 The classics are classics for good reason. Generation after generation, despite major shifts in culture, technology, and world view, they still manage to enchant our hearts, minds, and imagination. Anyone who has read Carroll's whimsical masterpieces has already walked alongside Alice, suffered through the caterpillar's riddles, and sneezed through the clouds of pepper being dumped in the soup. But Fiction Fixers allows you to take that walk in a very different and tactile way, allowing you to be an actual character without necessarily disrupting the integrity of the story. In fact, it should be noted that while much abridged, Fiction Fixers does treat the canon with a good measure of respect. If you're looking for line by line authenticity you won't find it, but neither will you find unforgivable liberties being taken either (like, for instance, shamelessly melding Wonderland and Through the Looking Glass to make a new, different story).

Solid production values help sell the story, giving this romp in Wonderland an almost Saturday morning cartoon type feel. The voice acting is in most cases excellent and enjoyable, and the artwork is a treat to behold. Thankfully Fiction Fixers doesn't attempt to reproduce the look of the original woodcuts or any of the more modern renditions, but instead stabs out for its own style and comes up with something that is lush, colorful, and welcoming to comers of all ages. Even when Fiction Fixers is being scary, it's not doing so in a scary movie way, but instead in a this is the scary part of the kid's cartoon kind of way.

Unfortunately, the gameplay isn't nearly as fresh as the story or its telling. The object finding is pretty standard fare with maybe a little too much reliance on finding long narrow items (yes, even the most die-hard object finders can get a little disenchanted with finding pencils, needles, chopsticks and walking canes), and none of the item based puzzles and mini-games are burdened with an over-abundance of either difficulty or originality. I will say that there are a few mini-games with just enough of a twist to make me smile, and in particular I found myself enjoying the more puzzle oriented treatment the match-3 segments received. Nothing here is particularly inspired, but neither is it particularly terrible.

Another problem that Fiction Fixers runs into is its relatively short length which may seem shorter considering that most who play this will already know most of the plot and can gauge where they are as key plot points arrive. I will say that this game does pull a rabbit or two out of its hat towards the end for a nice little surprise.

The fact of the matter is that grown-ups looking for a real meaty HOG with a juicy story might be a little underwhelmed by Fiction Fixers: Adventures in Wonderland. But then, I don't think that's this game's real appeal. There's definitely something there for those willing to take a nostalgic trip, most certainly, but the real appeal of this adventure is in sharing it with the little ones. The revisiting of a classic children's story in a new way, the brilliantly colored visuals, and even the relatively low level of difficulty suggest that this is a game that is best suited for children. More accurately, this game is at its best when shared by young and old fan's of Lewis Carroll's immortal tale.

The Hall of Doors

Chapter 1: To the Hall of Doors

Down the Rabbit Hole

Chapter 3: Getting into Rabbit's House

Chapter 4: The Fan and Gloves

Inside the Rabbit's House

Fork in the Road and Duchess Kitchen

Chapter 8: To the Garden

The Trial and Duchess House

Fork in the Road and Tree Door

Congratulations! You have defeated Victor Vile for now but he promises you have not seen the last of him.

Outside the Gingerbread House

You have completed your part in helping Hansel and Gretel so watch the ending scenes.

Extra Special Thanks to Jazz for this fabulous walkthrough of the bonus scene!

I downloaded the trial version of this game. It's a pretty simplistic game that seems to be a good one to play with your kids (as mentioned in the review). Other than that, it's not something that I would spend money on just for myself. The kids did like it, and I ended up buying it. We haven't finished it yet, but have had fun playing it together thus far.

I got this game through another site, and I must say, that this game is great! I blew through it in one day (but I did lay for several hours). I would recommend this game to anyone! ;)

The Hall of Doors

Chapter 1: To the Hall of Doors

Down the Rabbit Hole

Chapter 3: Getting into Rabbit's House

Chapter 4: The Fan and Gloves

Inside the Rabbit's House

Fork in the Road and Duchess Kitchen

Chapter 8: To the Garden

The Trial and Duchess House

Fork in the Road and Tree Door

Congratulations! You have defeated Victor Vile for now but he promises you have not seen the last of him.

Outside the Gingerbread House

You have completed your part in helping Hansel and Gretel so watch the ending scenes.

Extra Special Thanks to Jazz for this fabulous walkthrough of the bonus scene!