Oonga boonga baboomba troonga. For a more modern translation: Hey everyone! There's an awesome new game that is ready to rock your socks off. Before you ask, yes I am a professional caveman linguist so there's no need to turn to your translation apps. Feast or Famine, a new action platform game for iOS devices dreamed up by X4 Games, was made with some inspiration from Neolithic paintings and just maybe a bit of that totally-not-made-up language above! 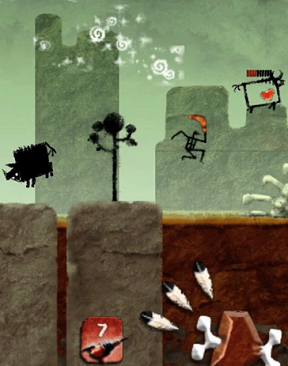 As a caveman stick figure your one goal in life is to survive. That means you've gotta eat meat. Armed with a string of different weapons like a spear or a ray gun, tap on the left side of the screen to shoot at birds or bison so you can keep your meat-er filled. Starvation isn't your only opponent, however. Tap the right side of the screen to jump, avoiding angry creatures while you grab bones speed boosts. Bones function as a currency that let you purchase helpful and often humorous upgrades that make platforming just a touch easier.

First off, how has someone not thought of this before? Secondly, thank goodness no one has already done this because that game would probably be put to shame when compared to Feast or Famine. Despite being made for mobile devices the graphics are shockingly attractive, the response of the mechanics are impressively clean, and the difficulty that each level presents isn't always dependent upon throwing an obvious obstacle in your way. The only real flaw comes from a lack of checkpoints, which means when you die you have to start the level all over again. Still, the stages are short enough that this doesn't become a game-killer. Whether you have an appreciation for cave art or want to test your mettle at being the hunter instead of gatherer this game is ready and waiting for your tender lovin' attention.