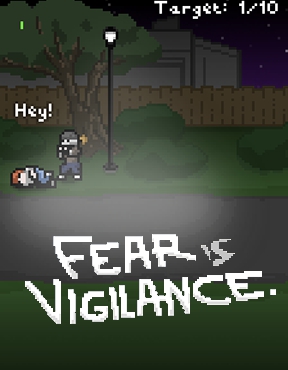 Marcy and Justine just want to do a good deed, handing out free personal safety alarms on campus. How dare those stupid students feel so safe that they refuse this offer? Clearly they don't understand the danger they're in. It's time to teach them, brawler style. It's for their own good, because Fear is Vigilance, at least according to this spruced up former Ludum Dare entry by randomnine. It's a side-scrolling beat-em-up fighter with an artsy, ironical soul, where you kick unconscious people on the ground... to save them.

You start out attempting to hand out the devices by walking up to people and hitting [X]. You probably won't have much success the first day. At night, you put on your ninja costume and sneak around, using [X] to hit people out for a nighttime stroll and [Z] to break through their blocks with a shoulder thrust. You can run into a dark area and stand still to hide, or in later levels, loop around the park to lose pursuers.

Once you've played through the five day story mode, you unlock an arcade mode and some badges for replay challenge. The game is not difficult and not intended to challenge serious fighting fans, as long as you employ a little patience in your vigilante activity. The game's incisive, satirical point makes itself clear through the cut scenes, and will surely have people thinking about whom fear benefits.

Wow, at first I thought it was a street fighter game but it has a plot beneath it.
Better take note that this game has lesbian love in it.

So this game is about beating up random people just so that they get themselves a free safety alarm? Why not just make them pay protection money to the early workings of a criminal syndicate, resulting in the rising of underground crime through the exploitation of the weak? Sounds like the beginning to every mob-movie to date.

I beat up 49 people just to give out 24 alarms. That doesn't seem very productive to me.

Either way, like they always say, when it comes to inventions, you either fill a need or create a need.

Think of it in larger terms (e.g. nationally) and it may take on more significance...

So apparently the threat of safety, are the people who are trying to assure safety? Weird and somewhat disturbing.

It's not about any evil or threat: It's not meant to show us any specific danger or highlight a specific issue. This is a game about misguided intentions. About people who try to do good, but who's intent comes out twisted.

What I find interesting is that the tale is told from the perspective of the misguided people themselves. Never are we shown the negative repercussions: The injuries and trauma, the paranoia, the fear. We see the world as our protagonists do: They believe themselves to be doing good, and that's all the game shows, leaving us to decide for ourselves whether they were right or wrong, and to imagine what the results of their actions may be.

And who knows, maybe they did make a positive difference. But you can only speculate about what lasting damage they caused in the process.

*note: the above is this poster's opinion, and is not meant to be an accurate summary of the author's intentions or beliefs. Remember that these sorts of games are open to interpretation and do not have a single "correct" message.

Thanks, Neonaxus, I very much enjoyed reading your perspectives on the game. You articulated your point of view exceptionally well, and I agree it's both logical and believable.

Interested in writing about games for us? This is exactly the kind of analysis I like to see from our review team. :)

JIGuest wrote: "Better take note that this game has lesbian love in it."

Hardly. It has an implied lesbian attraction, which is immediately shot down by the implied object of affection. Which seems pretty offensive and homophobic, actually: what's the point of introducing the theme except to explicitly dismiss/denigrate it?

But I did like the black-comedy ridiculousness of the main characters' bass-ackwards morality.

The message is clear enough for me: people with the most noble intentions are violent, deceiving, ruthless, closet homosexuals.

"Which seems pretty offensive and homophobic, actually: what's the point of introducing the theme except to explicitly dismiss/denigrate it?"

How about "humor" as the point? That can't be homophobic now, can it? If it is, I don't want to live on this planet anymore.

Guys, pretty sure this isn't an art game, and the author meant it to be fun and funny. Not saying you can't look for hidden meanings but I am saying that they are likely not on purpose.

@Reece, sorry to disagree, but games are art. As with art, we are free to interpret a game's message however we please, regardless of what the author had in mind when creating it.