Created in just 72 hours for Ludum Dare and still being developed, Fathom is an action platform game by Joe Williamson that's all about that bullet time. "I am no prisoner", promises our diminutive protagonist, who must use his skill, speed, and reality-warping powers to achieve freedom. Use the [WASD] keys to run and jump, and click the [mouse] to active a slowdown mode. While time is slowed, you can highlight incoming bullets that are fired by the various turrets strewn about the level and choose which direction they go in. In this manner, you can launch the bullets straight back at each turret to disable them, or manipulate them through the air for more complicated maneuvers. Add some powerups strewn about the level and you've got a solid, if short, action title. 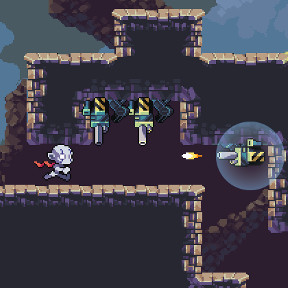 Yes, Fathom's a short one, hopefully with a promise of more to come. The game seems poised for a sequel, which we certainly hope is on the way, because there's some really excellent work being done here. Controls are tight and the world is compellingly designed. Seriously, why do retro pixel graphics look so darn good all the time? The game's got enough ideas to flesh out a few more levels at least. Laser barriers can get especially tricky when you have to guide bullets with multiple slowdowns to finagle them towards the generator and destroy it. And wrangling an incoming swarm of bullets and sending them careening back at your aggressor like Neo in The Matrix is just plain fun. So check out Fathom and make those bullets yours to command.

Don't know if it my pc/connection, but at the moment this game is so choppy it's virtually unplayable.

It's a bit difficult because you cannot see the target you are trying to hit.

Once you slow time, the view zooms in on the character, and the target is out of sight! How are we supposed to hit the target?

I really like the whole concept, I think it's quite clever. It could be a little frustrating at first, trying to get used to fading in and out of slowed time. That felt like the clunkiest part of the controls for me. I also didn't like that you respawned in slowed time, it messed up the momentum I had so I might miss a jump, and end up dying again. I didn't really have too much of a problem with not being able to see the target, maybe I tended to be closer to what I was trying to hit. Also, as long as you send the bullets off in the right direction, they reach their mark!

Anyway, it was super short, so I hope the dev is planning on expanding it. It was fun, and a really neat idea!

Gameplay aside, I *love* the art style.

Took me a few minutes to get used to the controls (hint: don't hold the mouse down, but hold-and-release-for-a-second-then-hold-and-repeat, so it doesn't take forever for another bullet to spawn but also so real-time doesn't resume), but once I did I burned thru the level.

Was kinda disappointed that that's all there was, which in retrospect probably means I enjoyed it. ;)

Aw man, once I was able to master the controls, I was really enjoying this game. Imagine my utter disappointment when I discovered it was so short! I am so glad this game will be developed further. Can't wait to play a more full version :D

But the music wasn't too bad for a short game.

One thing I liked is that

You have unlimited lives

This made the game about learning and not about reflexes.