With the sages out of town for a convention, a little teleportation spell in their absence doesn't quite go as planned and now it's animals. Freaking. Everywhere. Chickens clucking in the castle hallways. Sheep on cliffs. Horses down wells, and cattle mooing in the throne room. Unless the last words you want to hear in your life are, "Why is animals?" from a council of outraged wizards, you'd better get everything sorted before their return. flapbat brings us this phenomenal free magickal animal rescue action puzzle adventure game that'll have you finding all the animals to bring them home. Farmyard Chronicle, Director's Cut is the beautifully-polished version of a game-in-a-week release centered on bouncing animals around the screen and into teleportation gates ("Fieeeld gooooal!") while getting bounced around yourself by sheep and kicked across pits by horses. No, really. It'll take plenty of artifacts to get everybody home, like rings that make you dash, teleportation wands to swap places with the critters, and even altering the flow of time itself. 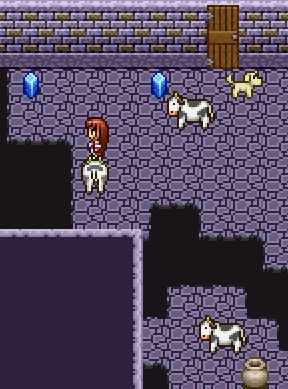 In the course of gathering all the animals you'll also acquire runeshards, and each adorable critter you teleport back will bring an additional runeshard with it. Your nameless friend whose teleportation spell mishap loosed all the creatures in the first place is still back at the barn researching new spells to bring them all back — because as with all magickally-manufactured mishaps, the only solution is even more magick. Your friend can craft magickal items for you to use when you bring him the required amount of runeshards. Items like the Dash Ring, which can temporarily boost your speed and enable you to catch all those pesky sheep instead of just getting knocked around by them. Or the Sigil Ring, which enables you to open gates. The Displacement Staff was our favorite though; one zap can cause you to swap places with another creature, or with blue spheres you'll occasionally encounter, allowing you to access hitherto-inaccessible locations. All these items and more cause increasing amounts of the terrain to open up as you play, and they're used very creatively to provide a plethora of diverse and intriguing puzzles ranging from silly and fun to a couple which are downright devious and taxing. Movement is with the [arrow] keys, [Z] activates any item you might have currently equipped, and [X] cycles through your items. 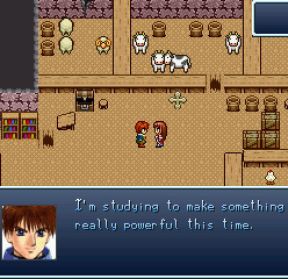 We had loads of fun playing through Farmyard Chronicle, particularly since with a name like that we'd initially only been expecting the standard farming or resource management title. It's truly refreshing to encounter such innovation here and such a stable, well-developed RPG Maker title due to flapbat's diligence as a game developer. While many developers using RPG Maker would swap out the standard graphics set for something that looked different but released a game which was nevertheless comprised of the same old thing, flap has done just the opposite: kept the original stock graphics, and then implemented a lot of new gameplay dynamics. The result is a look any retro RPG fan would find comfortable and familiar combined with a gameplay experience that's all its own. Farmyard Chronicle has channeled the unspoken hopes of a generation of RPG fans wishing that the NPCs would just hurry up and get out of the way and Harvest Moon players who thought that for all the cuteness the game could use just a little more melee, into a unique and enjoyable title. No HP, no arbitrary time limits to hinder your puzzle-solving, just an innovative, quality play experience for free. Thanks, flap!

I have found nearly everything, including

I am still missing

one sheep. I think I can hear it baa if I use Final Blast in the hidden room in the basement (the small room with four pots), but I cannot get to it.

I tried downloading and running this, but when the game starts the game screen is constantly flickering :(

Hello SigmaEpsilon. The final sheep is actually in a separate basement. Use your dash ability to break boxes in the outdoor screen with the two caves. Go down the hidden staircase and break more boxes until you find another hidden staircase!

Brittpope; the flickering screen is the result of the game-making engine working with certain computers. Go ahead and play a bit and see if it doesn't get better. Sorry I don't have a prescribed fix!

@flapbat, that did it! Thanks! That was a fun game. Now I just have to get

You've got bravery, my friend! Enjoy the final challenge :-)

Below is a list of where all items are located that are needed to complete the game. This does not include hidden items.

*Dogfood: In the east wing of the castle. Take the center door in the hallway with three doors and some pits.

*Castle Key: Inside the house south of the barn.

*Rope and Basement Key: In the northeastern most room of the Eastern Wing.

*Moon Key: In the well northwest of the barn.

*Dog Collar: Through the eastern cave blocked by a cat.

*Star Key: In the basement of the castle after getting kicked westward across a pit by a horse.

*Sun Key: In the western tower with the dog and cat.

How do I get the horses?
Is there a way to see my progress (how many animals or scroll pieces I've collected)?

There are still three cows that won't go through the teleporter. One in the west of the castle (where a sign lets you leave the castle). And two in the room you unlock with the star key.
Also, If the ESC key cycles through items, how do I get to the menu or close the game?

Besides that, I am really enjoying the game.
The stampeding sheep are surreal.

Patience my friend. You will be able to get the horses in good time! :-)

There is a trick to getting those cows. If you don't deduce it on your own, there is a book later that explains the mechanic.

There is no way to see how many animals you have left to save, but there are 136 animals total, and you can check that on your save screen. To exit the game, simply hit F12. It is suggested that you don't Alt+Tab, as it can sometimes create lag that remains when you re-load the game.

Glad you're having fun! I like the stampedes too. They were one of the first mechanics I programmed! The minecart, actually, was the first.

Glad you found my list of item locations, btw :-)

Tips:
• Use F12 to exit to the main menu.
• Blue chests have runes, Red chests have important items.
• Use the Dash ability to ram the Rams.
• There are a few cows that won’t go through the teleporter. It’s not a bug. If you don’t figure it out yourself, there is a book with a hint later in the game.
• You can catch the horses after you get all the scroll pieces.
• When you save your game, you can see how many animals and abilities you have. There are 6 abilities and 135 animals to find.
• There are three endings.

Scroll 1 – in cave in upper east pasture. Need the displacement staff.
Scroll 2 - pit room (In East building, the third door of long corridor with chicken. Need ability to jump over pits)
Scroll 3 – Hidden stair in first room of main castle. Need castle key.
Scroll 4 – In the East building, go through a locked door (Moon key, I think) to the room with a door leading outside (to second well). Need displacement staff.
Scroll 5 – Highest part of castle, past two stampedes. Look for an opening in the railing.

LaLa, I found the same thing and the minecart was, for me, one of the two hardest parts of the game. I'd even tried using an option that comes up later on in the game to make the minecart sections easier, but that didn't work. It seemed counter-intuitive to put a fast reflex action mini-game in a puzzle/RPG title because players who enjoy one genre may not enjoy another, but with unlimited retries I eventually got it. Overall it was interesting to see a game developer use RPG Maker successfully to implement something like that, and I certainly didn't want to discourage mini-games or innovation!

Okay. Now that I finally get pass the minecarts, I'm facing another I-retried-for-thousands-of-times challenge. Somehow, I just can't figure out the solution for the "swapping orbs with dog" puzzle (the one after the sheep stampede).

@kathleen.indie.gee: There are actually 4 endings and 136 animals :-) I like seeing hints and tips spread around though!

@LaLa: The issue with the dog is to get it to an area that also has a blue orb. It's a hard puzzle until you realize the solution. I hope you've figured it out and are having fun. You're almost at the end of the game!

Yes, the minecart is a challenge. I remember the feeling back when I was a kid of getting past a really tough roadblock in a game. It may be frustrating, but it also gives a sense of accomplishment! The one in the well is quite a challenge for me too without the minecart upgrade.