When you get some chilling omens in the middle of the night it's best to put up your guard. This farmer learned it the hard way when his prized sheep Lucy was carried away by a dragon. Now the heroic farmer is now off to save his pet with the help of his super pig and perhaps some folks he meets along the way. Though high up in these far away parts the natives here only seemed to response to violence. Beat the foes, gain new heroes and save your sheep in Wooood's Farmer Quest. In this different kind of RPG, your attacks are based on matching three or more icons to gain more attack power, build defense, heal yourself up, getting gold, or attacking the enemy. But this match-3 game is unusual from the rest as you're sharing the board with your enemy, and in this turn-based fighting system you have to think ahead and get the best match first before your opponent. Click and drag your desired shape to its match. This family friendly game is all about buying upgrades to improve your hero and unlock their secret move. Probably on the easier side of things, this game is just made to be enjoyed by all. 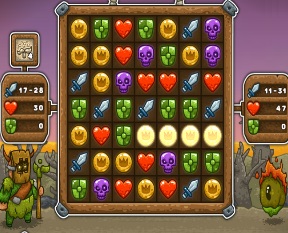 In this match-3 game, instead of swapping tiles you drag the column or rows one step up or down. The board also revolves so you can move it off the screen to have it pop up on the other side. It makes gameplay much more interesting as you have to look harder to find a match than most games in this genre. Playing against the A.I also switches things up as you now have to be aware of what matches you are making available for their turn. It's really what makes this game stand out as it does have some weakness, such as the grammar in the story line. The story is still really easy to follow and it doesn't cause confusion when explaining the game, but it does make it a more interesting read. The other issue is there is no mention on how to improve your hero, at least nothing I saw. Down at the bottom of the map screen has a portrait of your current hero. From there you can buy upgrades for his health, attack, and two specials that change hero from hero. It's something you really need to know as you just won't be able to keep going if you don't improve your starting stats. But Farmer Quest is still a fun little adventure and a must try for anyone who loves match-3 games.

I have to agree with Cornelius Baxter.

The game COULD BE GOOD, BUT IS NOT.

No tile dropping, instead they appear randomly where the ones you used were. Which means... no strategy. Almost pure random. Add to that the fact that you move the whole line, and you can only do it by one tile.

I don't recommend this "game", in which you can almost not do anything except pray. =/

So I'm on Level 5 and have all this money but cannot seem to upgrade my farmer anymore; I'm stuck at 75 health and 10-20 attack. Cannot see the point in fighting opponents who have skills far superior to mine when I can't upgrade. And yes, I've unlocked "Upgrade to a maximum any hero." Am I missing something?

I do not agree with you guyz. I think there is strategy into this game. It's not because it's different from what you already know, it means there is no strategy. Firstly, moving the whole line instead of tile needs to calculate if we can match different items when the line moves. Secondly, you need very early to choose your strategy: earn coins to upgrade your characters and their special features, increase your attack power, send direct attacks etc.