What's a girl to do, once she's traveled the world and helped her dear old granny rescue her farm? Well, buy a farm of her own, of course! Never mind that the farm is at the frozen pole. That's right; Alawar Games has brought us the latest installment in the Farm Frenzy time management series, Farm Frenzy 3: Ice Age! 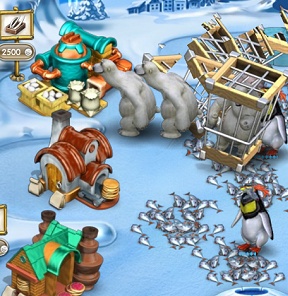 Like its predecessor, Farm Frenzy 3: American Pie, Ice Age is a "side" installment in the Farm Frenzy series, where you concentrate on a farm in one location, taking the time to master all of the animals and rebuilding and restoring the facility as you go. Unlike American Pie — where there was a distinct lack of anything pie related — Ice Age has... well, a lot of ice. And snow. And polar bears. But we're getting ahead of ourselves here. Let's start at the beginning.

The heroine of Farm Frenzy is bored one day and just happens to read an advertisement for a farm at the pole. Of course that's a good idea, what are you saying? Just because it's a frozen wasteland doesn't mean there isn't some good farming possibilities there. After all, there are the penguins. And the walruses. And the wooly mammoth. Wait, what pole is this supposed to be at again? Well, judging by the creatures and by a special guest appearance, this is a pole that exists only in the imagination.

The gameplay will be familiar to anyone who has played any of the many Farm Frenzy installments. You begin with a basic farm, a well that produces food (in this case, an ice fishing hole that produces fish, not much call for water in the frozen north), a budget, and a task. The task may be to produce raw goods, or manufactured items from those raw goods, and you have a limited amount of time, money, and fish to scatter on the ground to feed your animals. Eventually you will move on to larger, more complex challenges, involving several different types of animals and goods, some of which you can produce, some of which must be shipped in by helicopter. Frenzy is an appropriate descriptor, as eventually you will be juggling a lot of different tasks at the same time, working hurriedly to beat the clock.

It starts with penguins, who produce eggs, which you can sell at the market. However, it is more efficient if you set up a plant that turns the eggs into powdered eggs, which can sell for more money. Then build a plant that can turn those powdered eggs into cookies, then turn those cookies into cakes, etc. Eventually other animals will be added: royal penguins which produce feathers that eventually become clothing; walrus who produce ivory (that can be turned into souvenirs); and eventually those mysterious, supposedly extinct wooly mammoth, surprisingly not for their wool, but for something else entirely. Danger appears in the form of polar bears which can kick away your hard working livestock as they stride across your stretch of farm. Fortunately, there are also helper animals available which can drive off the predators or help you collect products as they hit the ground. 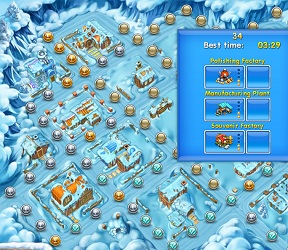 Each level is on a timer. Finish within a certain amount of time and win a gold trophy, finish a little slower and win a silver. Even if you don't manage to win a trophy, you continue until the goal is met. However, you want to finish as quickly as possible for the bonus points, which are needed to purchase upgrades to buildings and machinery. Those upgrades are needed to move on to the next rounds, so you may have to repeat a scenario a few times to proceed further. In certain cases, the linear track you are moving on splits, giving you a decision of which direction on the map to move, breaking up the linearity of the basic game.

Analysis: Ice age is pretty much a companion piece to American Pie. Not as complex as the main Farm Frenzy games, instead concentrating on perfecting one farm, albeit a rather strange one. Playing American Pie, for instance, could necessitate raising sheep for wool, which is turned into yarn, then cloth. To turn the cloth into clothing you needed to import strange feathered neckpieces. Well, in Ice Age, you are approaching the same task from the opposite direction, as this time you are constructing the feathered goods and need to import the cloth, presumably direct from granny's farm in the Midwest. The combinations used to produce goods are similar to those in American Pie, complex but not overly so.

As usual we are looking at the standard Farm Frenzy art, cute cartoony animals against a fantasy background. Unlike the usual farms though, you're looking at a lot of ice and snow, making the whole game actually feel a little chilly while playing. Eventually even the polar bears will end up in snowsuits, so we're talking cold. A lot of the amusement and fun of the game comes from the animals, the waddling penguins, the amazingly cute walrus, the stalwart guard dogs, the elegant cats, and the adorably poufy mammoth. Despite the climactic differences, this is still a basic Farm Frenzy game.

It's all becoming a bit... same, isn't it? The game is still wacky fun, and progresses to some wickedly difficult levels, but it would be nice to see some changes introduced, other than just substituting "new" animals for a different location. Some of the goods and manufacturing processes are different due to the animals involved, and the tasks involving the mammoths (when you eventually get to that level) are cute and unexpected, but the dynamic is still very much in the Farm Frenzy groove. If you've played any of the series this will all seem very familiar.

Despite the similarities to the other Farm Frenzy games (or, perhaps, because of it) Farm Frenzy 3: Ice Age is still a rollicking good time. With tons of trophies to win and lots of levels to conquer, you're still looking at hours and hours (and hours) of casual gameplay and replay value that is fun for a wide range of ages. So enjoy the cute animals, and look out for an appearance from a very special guest star.

Farm Frenzy 3: Ice Age is available to download from these affiliates:

It must be tough writing articles for the weekend, which get little to no reader attention.

Was looking for a walkthrough as I find this farm frenzy really hard,I have 25 can't get gold and 9 of those are blue. I love the farm frenzy games but have to say I have found this one a real challenge and one I need alot of help with. So where are you all? Help pls. thanx to all

Don't get why there is no one to help with this game? ok so now I have 3 blue and believe me there is no way I can even get silver never mind gold. And yes got alot of silver out there too, ok more gold than silver. what has happened to the help from this site? aww

Does anyone know when the new virtual villagers are out yet?

Can you please post the level numbers and I will be happy to help you :)

Need help:
I need to know how to make Christmas Trees, It showes a place for making ribbons and Santa Clause, but nothing for making trees, can anyone help. Is it a bur in the game?

Santa will make the trees, but you need the following two items: An ice cream sculpture (in the shape of Santa) and Santa's mail (which you order by helicopter). Once you've made the sculpture (snow to ice, ice to ice cream, ice cream to sculpture) and have the mail in your bin, Santa will show up. Click on him and he will take the ice cream sculpture and the piece of mail and give you a Christmas tree.

Special thanks to Kayleigh for this fabulous walkthrough!

this is a frustratingly poorly done walk thru. sigh. I must be terribly spoiled by those done on previous versions.

[What exactly is the problem with the walkthrough? Would you please provide some examples of why you feel this one is inferior? We may be able to address the issue(s) if we know what you expect. Thank you! -Jay]

grinnyp,
thank you so much!!!

Would just like to say thanx to Kayleigh for responding to my request for help and hope I am fast enough to get gold but then it's my fault not anyone elses. Cheers , I love this site have to say. good on all helpers which this site represents.

how to get the trophy for playin wit patient... wat is the required criteria?? i gt all gold n all trophy except tat... can u pls help...

How do i can get the award for playing with patient its really hard to get. Please leave a comment.

thanks for the walkthrough, a small suggestion; if you keep the king Penguin as for a 3 extra feathers and make custumes, you will find it possible to get the custume factory sooner. much easier to make gold. I tried it your way and could not get gold, I have carpal tunnel so that does not help.

Thank you very much for the walkthrough. Helped me get gold on the last few levels I was missing. I'm playing the iPad version, which is almost exactly the same except for the trophies. One of the trophies is for completing EVERY level in record time. Can you post what the starting record times are so I don't have to replay every level?