OMG it's a vegetable crisis! Ginger, the young and successful head of the Tomato Corporation, used to be a farmer. Her grandparents invite her back to the country for a visit, and when she arrives, she meets a down-and-out businessman who couldn't run a farm if it were automated. Ginger offers to show him the ropes, but she quickly learns of a sinister plot involving giant cucumbers, genetic manipulation, and stereotypically evil flat characters! So begins Farm Craft 2: Global Vegetable Crisis, a time management game that is, believe it or not, story-centric and is perhaps one of the most inventive and engaging time management games on the market today. 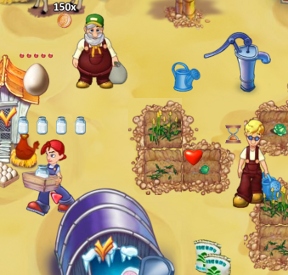 Although Farm Craft 2 shares some very basic traits with its sim farm cousins, the similarities end just moments after you notice they're there. Instead of showing you the ropes and then gradually increasing the complexity as levels go by, Farm Craft 2 dares to introduce story-based locations with unique buildings and goals, hired help that can actually do your work for you, and — get this — a nighttime stealth level!

The first level will familiarize you with the basic controls. Use the [arrow] keys to scroll the screen around, but the mouse will accomplish everything else. You control Ginger and must manage the intricate workings of each farm you run. Double click an empty plot of land to till it, then buy some seeds from the menu at the bottom of the screen and sprinkle them on fresh soil. After a while, those seeds grow into plants, at which point you must grab a crate, harvest them, and take them to the barn to get paid. You can queue tons of tasks in a row, so don't hesitate to keep Ginger busy at all times.

Soon, you learn plants will call for fertilizer and water with respective heart and droplet icons. This is easy to take care of, as fertilizer is available from the shop menu, and a watering pump is right there on the screen. Before long you'll also raise animals, a task that requires you to gather food to feed them and build a refrigerated storage unit to hold their products. You can even harvest fruit that grows naturally on trees in the area, a nice touch that makes the game feel a bit more like a sim than a time management game.

After diversifying the types of seeds, equipment, and buildings you can buy, Farm Craft 2 introduces workers. These handy folk can be hired and paid a salary to perform basic tasks on the farm when things get too hectic for one gal to take care of. And yes, things will get pretty busy. You're not working against the clock, though (unless you want a trophy), so workers are there to fulfill level goals and to make your life easier. Hire workers from the shop menu, then click on them to send them about their duties. Watering hands, animal keepers, harvesters and fertilizers are some of the first workers you'll have access to, and they're a huge help by the time they come around. 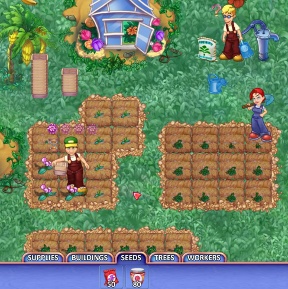 Analysis: Whew. Farm Craft 2 is intense. The good kind of intense, too. When I first played the game, I burned over an hour before I even thought about taking a break. I was completely absorbed into this sim/time management world, and the promise of something new waiting in the next level had me eager to see more. Some of the levels are long, and the challenge is cranked up to a respectable level, but it's practically impossible to fail, so you won't have to worry about losing anything you worked for. It's that kind of gameplay that makes a casual game so rewarding.

There's a lot to Farm Craft 2, and that's exactly what makes the game so special. Beyond the full battery of seeds, crops, buildings and upgrades you'll have access to, the game also gives you the ability to set items anywhere on the screen, something that doesn't seem like a big deal until you actually get to do it. You can even move buildings and bulldoze bothersome landscape features, allowing you to shape and customize the world to your liking.

Also worth mentioning is the visual style of this game. You'll immediately notice the characters' animations are very fluid, each drawn with soft curves and a sensitive color palette. You know the artists did a great job when you're entranced by watching the watering animation. Seriously, sit and watch Ginger (or anyone) spread water on the ground. You'll be amazed.

Farm Craft 2 builds a crucial bridge between time management and sim genres and crosses it only when it's advantageous to do so. The game looks great, it plays well, and you'll have a difficult time putting it down at any point. This is one of those rare casual games that stand out of the pack for its phenomenal design. If you like it, you should also check out one of developer NevoSoft's other games, My Kingdom for the Princess.

I'm really enjoying the game, but am having trouble with the night shifts. I can't get enough light for the employee to keep working.

You have to build more generators for the lights to be brighter.

You have to use the lawnmower on the patches she won't dig up.

It's $5 a pop from the supplies menu.

Is there a certain path to take to get past the security guards?

I cannot get past level 11. Any suggestions? Other than level 11 I have liked it so far.

UGH!! The bio farm is driving me nuts! I HATE that you have to start all over again and listen to the instructions all over again every time you get caught!! Speaking of which--I am dumb and cannot get past the cucumbers. Actually I did get the cukes, but I picked up the bag instead and now I can't get past it again. Any help? I don't want to do this type of task, can someone tell me if there are more levels of this? If there is, then I'm done. Don't find it fun or enjoyable at all. If I wanted this, I would play those grandma games and outrun monsters and grab cats.

I can't get past Level 13 how can sell eggs,pigs, and wool, if I can't pick it up myself?

Help! What does upgrading the animal buildings do for you? it doesnt make anythign worth more. am i just wasting my money?

By upgrading your animals they will produce in half the time with half the resources.

Has anybody made it through Level 21? I was having so much fun until this level. I'm supposed to put up generators and street lamps, but I don't see generators available for sale on the supplies tab. Am I missing something?

Either hire an Animal Breeder, or make sure you have the refrigerated storehouse.

"Has anybody made it through Level 21? I was having so much fun until this level. I'm supposed to put up generators and street lamps, but I don't see generators available for sale on the supplies tab. Am I missing something?"

I completed the game, but in level 21 I must do all the dirty work. No generators, but you can do the work yourself man.

the level with the guards is easy you just go past them it doesn't matter if the see you only if they catch you. Upgrading makes the process faster and use an employed farmer to collect animal products.

I can't get through Level 23 with the timer going so fast. Anyone have ideas?