Smilegate's iOS RPG sim game Faraway Kingdom - Dragon Raiders may be free-to-play with in-app purchases and timers, but before you hiss and recoil, hear me out, because this is one seriously adorable and addictive little game that never pushes you for money and manages to be generous enough with its timers and currency that you'll never feel pressured to spend. Best described as a combination between Tiny Tower and a simplified fantasy kingdom simulation, Faraway Kingdom tasks you with rebuilding the land after a great dragon destroyed it, and training up an army of heroes tough enough to take it down. This essentially splits the gameplay into three parts... the town, the dungeons, and the portal. The town is where your heroes stay, and as it grows, you can hold more of them, who pay you taxes as long as they're living in the houses you build. Beneath the town are the unlockable dungeons where monsters roam, and you can send parties of heroes to each level to slay enemies and earn you cash and minerals used to upgrade equipment. The portal allows you to send raiding parties to different areas using energy (which refills at one point for every five minutes), and this is where you'll actually accompany your heroes to duke it out. They'll fight on their own, but you'll need to pick up the coins that appear and the class power-up icons... nab a warrior sphere, for instance, and you can tap the icon to use a powerful attack, or stack multiples to make your attack more powerful. After a few battles in a row, your heroes will go up against a boss, and unless they defeat it before the timer runs out, the boss will become enraged and its damage will jump. Survive and you'll level up your heroes, as well as earning valuable equipment and other treasure. It's a simple formula, designed for multiple quick bouts throughout the day rather than marathon sessions, but a gorgeous art style and unobtrusive in-app purchase options that are truly optional makes this one feel like it might just get free-to-play right. 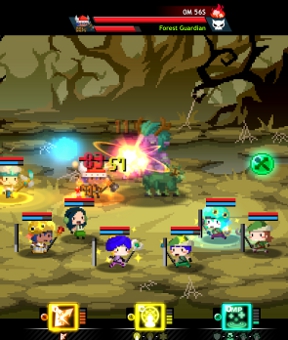 In addition to gold, which is spent on recruiting heroes, buying new armor, and expanding your kingdom or dungeons, the game also offers diamonds. Diamonds can be used to instantly complete tasks or summon more powerful heroes, as well as to keep battling in raids if your whole party is wiped out, and while you can buy them with real money via in-app purchases, not only are there multiple free ways to earn them, but you're granted them very frequently for leveling up, completing areas, and as log-in bonuses in surprisingly large amounts. You'll need friends in the game to help unlock powerful artifacts (because reasons) and you can always add a friend's hero to your raiding party, but you can also use diamonds to unlock or simply roll without the extra hero instead. Adding a friend is as simple as searching for their "nickname", so feel free to post your name in the comments below if you're looking for buddies.

Where Faraway Kingdom gets (kinda) complicated is when elements and destinies come into play. Each hero has a row of numbers that correspond to different colours, the elements, and the higher the number, the stronger they are in that element. Each dungeon is of a different elemental type, so sending heroes that match it there will help them fight better and faster, and of course portal levels have elements assigned to them as well. Every hero also has a "destiny", which is essentially the dungeon they're meant to be assigned to, and while they can fight anywhere, if you assign them to their destiny, they'll be happier and fight much more efficiently. Throughout the course of the game, you're going to find a lot of heroes, and not all of them will be strong or useful, so you'll want to make sure you're always evaluating. While heroes can show up to the kingdom on their own, they'll only join you freely if the random house they want to live in has room, and otherwise you'll have to spend gold to hire them at the inn. The heroes you earn from raids will go to your storage, accessible by tapping the little icon with a hero silhouette, but you can't use them until you move them into a dwelling. 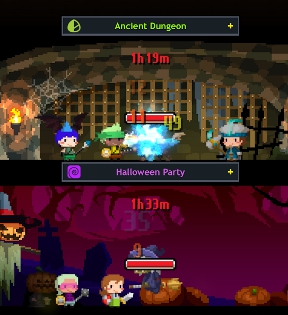 Analysis: Faraway Kingdom's main issue comes down to a lack of clarity. It's simple to play, sure, but a lot of the finer points of the game just aren't explained very well, or at all. The game doesn't tell you, for example, that when you have multiple heroes of the same type in a raid, you'll cycle through their abilities automatically when using tokens. The other big problem is that the whole thing just feels a little clunky. You have to sift through multiple screens for your heroes, depending on where they are and what they're doing, and it makes keeping track of them a pain. Since you can't tell what abilities or strengths a hero who shows up at your town gates has to allow you to compare them to the heroes you already have, and the house they'll choose is random, "keeping a bed open" in every home as the game advises is a cumbersome and inefficient solution at best. Once you have a lot of heroes, swapping everyone around and keeping track of stats and equipment turns into a dizzying juggling act. You can't just tap a character icon in a dungeon, for instance, and be presented with a detailed list of heroes to compare them to and then trade out... first you have to dismiss that hero, then choose another from a long scroll with minimal sorting capabilities. It just feels clunky, and desperately in need of some streamlining.

On the other hand, while definitely on the simple side, Faraway Kingdom earns a lot of points for being free-to-play without turning oppressive. The way it doles out all of its currencies so frequently as rewards and log-in bonuses, combined with the relative speed that energy regenerates, means it doesn't feel like a pressurized cash grab. Everything can be earned in game, and in ample quantities. The vibrant style holds a lot of the game's appeal, with cute characters who change appearance depending on what you have them equip, and raids are fast and flashy. It does feel as if there needs to be a little more to keep players coming back long term, with houses being the only real upgrade, but there's something addictive about the dungeons and portal battles nonetheless. Though only available at the moment for iOS, there seems to be what looks like a Chinese version on the Google Play store, so keep your fingers crossed. Faraway Kingdom - Dragon Raiders may not really have the depth to be regarded as anything other than something you'll pull out and fiddle with for a few minutes at a time throughout the day, but it's perfect for casual fantasy sim fans.

"The game doesn't tell you, for example, that ." ... Is something missing here?

This game is great! The community is nice and there's a community spreadsheet detailing drops and other goodies. There's a subreddit even made by the devs themselves. :) Come visit!