Even before computers and smart phones, mankind loved to dream up gadgets. Some men merged science with imagination to invent light bulbs, create telephonic conversations, or write stories about extraordinary voyages. Likewise, in the 1880s, Edwin Cogglethorpe built many Fantastic Creations to amuse and convenience; the House of Brass being his wildest and most elaborate. Yet Cogglethorpe's attempts to live forever in a hermetically sealed, windowless, fully-automated home had one big downside: it left him trapped, alone with only mechanical animals and robots as company. 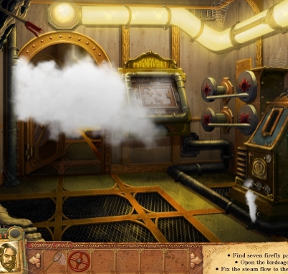 This steampunk fantasy adventure hybrid from GameInvest could have easily come from the imagination of Jules Verne or H.G. Wells if they were in the game design business; the furnishings have Captain Nemo appeal while fanciful machines echo the Time Traveler's handiwork. Amazement and curiosity bring you to the now powered down and deteriorating House of Brass where upon you must escape, your steps dogged along the way by an adversarial robot housekeeper and multitudes of overly complicated contraptions. The fantastical structure is chock-full of strange rooms including a gallery, a planetarium and even a zoo (all mechanical or steam powered, by the way.) Soon you'll be asking, "Just what kind of place is this?"

Despite the elaborate environment, navigation and interaction take only a simple click wherever you want to move, grab an object, play a mini-game, or inspect an area more closely. A changing cursor helps with this but your explorer's skills are also needed. The House of Brass is built for discovery, every room full of interesting things and puzzles to work out. You'll encounter, and repeat, the familiar but there's several more unique puzzles such as a gorgeous planetary orbits game and a series of charming clockwork theatre productions. Hidden object scenes are few and require you find twelve of an item genre to allow focus on the search rather than reading and rechecking a random list of things. 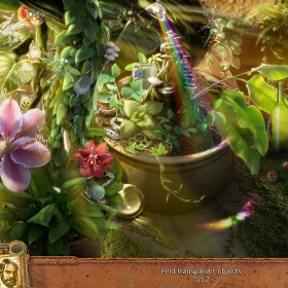 Analysis: House of Brass is extremely enjoyable if you love exploration and discovery with plenty of mini-games to reward your powers of deduction and reasoning skills. On the other hand, those who prefer the standard hidden object game will be disappointed. In the main story campaign, I counted only five or six different hidden object scenes and revisited only a few of them. On the other hand, almost every room is filled with mini-games. In the case of the zoo, you're called on to repair several broken mechanical animals by solving a small puzzle for each. Meanwhile, after finding a slew of bird books stashed in all sort of places around the house, you'll need to arrange them in order but, in that odd quirk of physics common to adventure games, by moving one book, two others are moved as well.

While adventuring and puzzle-solving are the main focus of Fantastic Creations: House of Brass, the narrative elements of the game are noticeably light. Cut scenes are almost nonexistent; the story progresses visually as you discover the full structure of the house and through Cogglethorpe's explanations. Although you are asked at the beginning to keep your sound on for the best experience, it's only a good experience of you want to hear a cogged old centenarian blathering on at your every move. Fortunately, there are separate volume controls for sounds, music and voices, so your preferences can be matched. I recommend treating yourself to the Collector's Edition if you can; in it you'll have access to the prologue, letting you see the house in its prime, and replay the mini-games to your heart's content. The back story is even more interesting and compelling and being able to revisit the mini-games increases replay value. 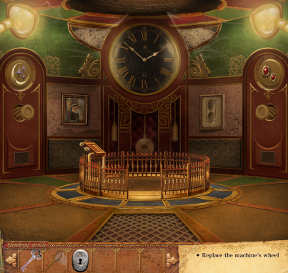 Without the title to give it away, your first impressions would lead you to believe this a sequel to The Clockwork Man. It all has a fantasy meets steampunk feel as if you've been granted admission to tour a museum of oddities. Sarah Winchester's mansion has nothing on this place in terms of architectural eccentricities. The hands on mechanics of the mini-games will draw you in and your efforts at exploration are rewarded with the sordid revelation that living forever has no good effects on sanity. It's a Wellsian lesson worth a second study.

Getting to the Next Floor

Getting the Last of the Firefly Parts

Getting into the Bedroom

Getting to the Planetarium

Getting the First Elevator Button Half

Getting the Final Book

Getting to the Nature Level

Getting the Rail Track

Getting the Hexagonal Key

Getting the Theatre Doll

Getting to the Next Level

Get the Filled Blowtorch

Looks like one of the better kind. Just finished the demo; fantastic scenes, nice puzzles, not too much hidden objects (more like "find ten things that spin" etc.).

Loading the full game took some time (600 Mb+), felt like a slow server on the other site to me (and I've got a 95Mbps internet connection).

But what I saw in the demo: it must be worth the waiting!

Getting to the Next Floor

Getting the Last of the Firefly Parts

Getting into the Bedroom

Getting to the Planetarium

Getting the First Elevator Button Half

Getting the Final Book

Getting to the Nature Level

Getting the Rail Track

Getting the Hexagonal Key

Getting the Theatre Doll

Getting to the Next Level

Get the Filled Blowtorch