There have been many studies done showing how to strengthen a family. Eating at least one meal together, giving each other nicknames, fighting off a horde of evil creatures that have arisen from the depths of... well, all right. So not a lot of studies have been done on the last one, but in the case of Family Rush you can see the family bonds binding even stronger as they blow these monstrous critters off of the face of the planet. It all starts, in this different kind of rail shooter by Denis Vasilev, when a demon needs a real child to complete his spell. Not wasting time, his minions swipe a little baby straight from his/her crib, but not only did that family of six have a little infant, but they also each have a weapon of choice. And so the showdown begins. You start off with only the father, an universal soldier, but after you advance enough you soon unlock his wife, two grandparents and even the family dog, all who are ready to help with their own special weapon. Your little group slowly walks forward. You're not able to control their movements but you aim with the mouse on where you want them to shoot. They all have separate health so if Granny takes too many hits, she'll wheel herself off the screen but the rest will keep trucking forward. You have to plan your strategy carefully on what to eliminate first and purchase the upgrades that will really give you the upper hand. 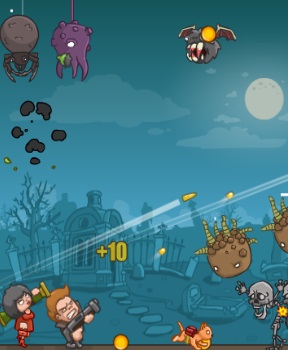 Family Rush starts off rather slow. You only have one shot until you bow out and since you can't move, you can't dodge. It can be somewhat frustrating as you can't even run forward to get the gold, but later you see that with a large family unit moving would be rather useless. This also changes how to play the game, since instead of just dancing all over the screen willy-nilly, you have to have sharp aim and know what to get rid of first to make it farther. Most monsters don't just charge forward, instead doing a hesitant dance on screen. For those flying in the air it can make it difficult to hit them, but the family shoots where you hover your mouse (no sore fingers from rapid clicking or holding down a button the whole game) and even the heat-seeking missiles you gain later at first fire in that direction and then go to the closest flying monster so you still have a lot of control. While gaining new family members brings new weapons to the play, it's the monsters that are the most interesting and sometimes quite creepy for an adorably colored and animated game. The ending is rather blunt and in your face but this game is an enjoyable little time waster that won't take hours of your day. Besides, we could all use a little family bonding time in our life.

I think the "mute music" and "mute sound effects" icons are swapped.

Also, on my penultimate run, I got both Grandpa and Sparky, and it only told me what Sparky did!

It was reasonably enjoyable, but easy enough once I had all the family members.

A bit "grindy". And once you get to the end, there's no decent win cutscene. Just, cut to stating image. At least give me a good boss demon exploding and a little family happy-dance. Certainly a little "we got the baby back" animation.

I was grinding peacefully along and holy what are those red dinosaur mole rat devils?

It felt a little grindy, but nothing compared to others like it. It is actually easy to beat. I didn't have to upgrade granpa and pup but once before I beat the boss. It would have been nice to get my coin after beating the boss so I could maybe upgrade and play it though again.

If you beat a level, go to the upgrade screen, to the menu and back you lose all your coins. If you quit playing the game and come back you lose your earnings. I had the same problem as korvarthefox; I got grandpa and I got sparky and it only told me about sparky. There is an info button so you can see their information later if you did not read it or if the game skips it.

Terribly grindy but at least you don't start the game from the very beginning every time.

It'd be nice if the other characters were controllable after the dad is dead. And their AI was a LOT better.

For a family, mum REALLY isn't much of a team player in defence.

Does he? Does he really? I saw NO evidence of that after one of those two legged red things ran RIGHT through our group leaving us all with 1 health a piece.

It'd be nice to be able to choose which of the various stages you'd like to start at rather than being dropped into the most difficult stage you've already reached.

Not a very nice programmer is he doesn't want us grinding easier levels.

After beating that boss all you get is a crummy "Congratulations!" screen?

If you aim well and destroy a lot of enemies it is less grindy. Also, it helps to protect the other characters until you can upgrade them. You just have to figure out which upgrades are the most beneficial.

I have played dozens more that were far more grindy than this. That is why I said it was a bit grindy and wasn't ranting about it, if a game is too grindy I most often quite playing; this one was not one of those.