Family Guy: The Quest for Stuff

It's crude. It's raunchy. It's offensive. It's nonsensical. It's... well, it's Family Guy. In this free mobile game by TinyCo, Family Guy: The Quest for Stuff is a pretty literal title. After a brawl with the fowl Fox executive who cancelled the show, human black hole Peter Griffin finds his town Quahog completely destroyed and his family and friends scattered to the winds. Since the town is destroyed, everyone needs to be put to work to gather cash and experience to rebuild it. Tapping a character will bring up a list of actions they can perform, either as a means to grind money, items, or levels, or to further "quest" requirements. Most quests will unlock new characters and items, as will leveling up your town, while leveling individual characters unlocks new actions and costumes for them to wear. So... yes, Family Guy: The Quest for Stuff is basically The Simpsons: Tapped Out (unsurprising given they were made by the same people), and that means it's essentially Family Guy themed sea monkeys. 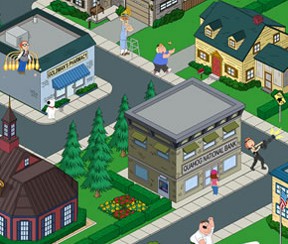 Entertaining sea monkeys, mind you! While the recorded one liners characters spit out quickly get old as you order them around, the characters themselves and their animations are fantastically detailed in a way that makes many of them hilarious to behold. The game is packed with humour, some of which doesn't translate quite as well to simple written word over the show's trademark visual gags, but fans of the show will notice a lot of references, such as the way the only person who likes Chris's FaceSpace posts is, uh, kindly old Herbert, especially when Chris posts his whereabouts. As you unlock more of the town and its folk, you'll gain access to more buildings with functions, characters, and even simple decorations for you to design with. The downside is that while timers on activities will continue to tick down whether you're playing or not, allowing you to set the game aside if something is going to take a while, you do only generate cash and experience if you're actively playing, and the characters won't reassign themselves to new duties when they're done their current task. 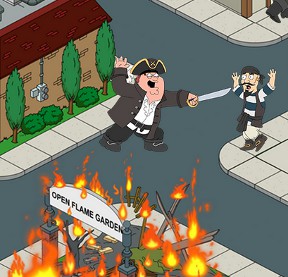 If you're at all familiar with Family Guy, you know its style of aggressively raunchy and potentially offensive satirical humour, but you might not be prepared for how aggressively and offensively monetized The Quest for Stuff is. After just a little while of playing, the times for activities to complete will jump substantially, as will the cost of expansion, and characters will repeatedly nag you to spend the rare (and purchasable) Golden Clams to speed everything up. More items are available only through huge amounts of Golden Clams, and one of the early quests you receive is even to spend real money on the game. To put cost into perspective, one of the special characters costs 250 Clams, which equates to $10.00USD, while an animated statue of a pterodactyl will run you the equivalent of $20.00USD. Can you play without spending cash? Sure, for the most part. But it's a long, long road, especially since time AND cost for activities increases as you play, and nobody is going to shut up about your wallet. It feels like there needs to be some substantial tweaks to balance for cost and time in the future before I would ever even suggest opening your wallet.

I am not, to be clear, nor have I ever been, against developers earning money for their hard work. Any game takes time, effort, and money to create, and it's clear a lot of talent has been poured into making Family Guy: The Quest for Stuff, one gorgeous looking and funny little sandbox. If it had a price tag, or a flat in-app fee to unlock content, I would recommend paying it in a heartbeat if you enjoyed the game. The problem lies in how ba... uh... brassy the game is about trying to get you to pay, and that's definitely going to sour the experience for some. If you're a fan of Family Guy and have a lot of patience, The Quest for Stuff has a lot to offer with its amazingly detailed and bright presentation, making it the sort of thing you can pick up and fiddle with for a few minutes at a whack over a long period of time. I like it, as simple and raunchily endearing as it is with its plethora of things to unlock, high quality animation, and ridiculous situations. I just wish it wasn't constantly hitting me up for cash.

Android:
Get Family Guy: The Quest for Stuff

Family Guy: The Quest for Stuff

When I enter FaceSpace, some characters have a little ribbon with a clothes hanger. What does this ribbon mean? My best guess is that it is to mark non-regular characters. I have Peter, Chris, Glenn, Bonnie, and Jerome, and only Bonnie and Jereme have the ribbon.

I think that is a ribbon for having all of the costumes unlocked for that character. So for characters that have no other costumes you would get the ribbon.