Family Feud: Dream Home is another television game show to make the leap to the casual gaming world. The classic "guess the most popular answer" formula is as exciting on your computer as it is on TV, only now it's much more interactive than just yelling at the screen. With over 3,000 questions to ponder and a tacked-on home decorating game, you won't have a hard time finding an excuse to guess what the "survey says". 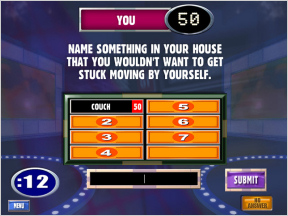 Family Feud: Dream Home functions just like the television game show, exuberant host included. One hundred people were surveyed for each question, their answers recorded and arranged by popularity. Guess the more popular answer and you'll earn more points, but give three wrong answers and you'll have to move on. It's that simple. Beat your opponent in team play or the average score in single player mode and you'll enter the Fast Money round where you'll fire off responses in an attempt to raise your score above the 200 mark.

The interface in Family Feud: Dream Home is text-driven, so you'll be doing a lot of typing. In order for this to work, the game must be able to interpret your answers in context of the possible responses. For example, entering "siren" is the same as saying "turn on the sirens", so as long as you're in the ballpark of the right answer, you'll hit it big.

As for the "Dream Home" part of the game, winnings you earn from playing Family Feud can be spent on furniture and decorations to spruce up your empty house. The decor isn't as exciting as in Home Sweet Home, but if you enjoy design you'll get a kick out of this mode, even if it has nothing to do with the main game. 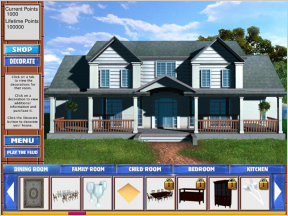 Analysis: Tons of questions, an announcer that always encourages you, and equal parts fast action and serious thinking. Family Feud Dream Home is a great package that's even better with a friend. The interface doesn't bog you down with awkward stalls, keeping the action fairly fast-paced. And some of the animations are strangely riveting, such as when your score is tallied at the end of the game. I could watch those numbers fly around all afternoon.

One slight disappointment is the integration of the "Dream Home" portion of the game. The two function as completely separate entities, the only connection being your earnings from the gameshow allowing you to buy furniture. It leaves you with a big "huh?" feeling, as it doesn't add much to the game and just feels out of place.

And then there's the game's vocabulary database. Sometimes I was amazed at how well my answers were interpreted, while other times I wondered just how smart this program really is. Typing "black" to one of the questions was hailed as a miss, yet when the answers were revealed "wearing black" was a response. Maybe I was too vague, this isn't a word guessing game, after all. But sometimes my half-hearted attempts at guessing yielded spectacular results, so it can be a hit or miss experience. Overall, however, the thesaurus does a good job.

Family Feud: Dream Home is available to download from these affiliates:

Fine mix of games. Sorry that is too expenisive to me.

'cause I live in Poland the 19,99 $ is about 60 zlotys and this is my double weekly pocket money!

The currency in Poland is the Zloty?

You learn something new every day...

Actually it is Złoty but in 2010 we in Poland will be having euro, which is much more better.

I'd be a bit sceptic about the 2010 Polish euro, but this is not the forum to discuss such issues :D

The BigFish installer gets more nerving and nerving instead of better. Now it even wants an email address, not to speak of the usual installation directly into start menu root, and Desktop.

I already get angry, when I see this stupid fishface once again spawning all over my system. I would have even bought 1-2 or two rather better fish games, if I just really refrain of supporting such anti-application-netiquete behaviour.

Instead of complaining about it, show your support (or lack thereof) for the Big Fish loader by supporting those companies that do not use one.

Oh sorry, I just clicked "Download the demo" and though Big Fish was all about it.

Cool that means I can finally buy miss management without supporting that big fish crap :-) Yay!

I actually like bigfish. It's an easy way to keep all my games organized in one place, much like how valves steam system works.

As much as I hate the Big Fish loader, I'm willing to put up with it to save a few bucks.

Anyway, as far as Family Feud goes, the word recognition leaves something to be desired. On a question about cheerleaders, inputting "team captain" yielded "team name." I also ran into some overly-specific regional terms. For example, when I entered "stroller", it gave me a strike, only to reveal "pram" as an undiscovered answer at the end of the round. (Is there a place in the United States where they actually use that word? Or a British version of the game show?)

Of course, all that is to be expected from a game with open-ended responses that isn't being moderated by an actual human. If you don't have a bunch of friends willing to play the board game with you, this would be a good alternative.