Fall loves Kaisa, but Kaisa only loves dashing pirates. Luckily, there's an extra pirate costume hanging around, you just need to figure out how to get to it! That's the gist of Fallin Love, a puzzle platformer by Chestnut Games and BulkyPix. By twisting and turning your mobile device, you can manipulate gravity, letting Fall drop among moving platforms to collect hearts and costumes, then reach the exit, where Kaisa is waiting to greet her ninja lover. 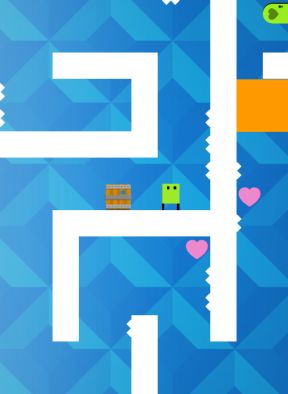 In your quest for that ninja costume, you'll find a room that also has three hearts in it. Touching the left or right side of the screen (in your current orientation) will make Fall walk. You can't jump, but you can rotate your device to a different position. After a moment, the gravity will shift to your device's current "down" position, and Fall will fall. If you can snag the costume, you can make your way to the door to escape to visit the Greek-loving Kaisa, but grabbing the hearts can help unlock bonus levels (more on that later).

But grabbing that toga isn't a cakewalk (cakefall?), because levels are often strewn with spikes that skewer you, holes to fall through, and enemies to march-back-and-forth-like-lemmings you. Plus, there are loose blocks that will fall with gravity and crush you if you're not careful. And that's not just from above, orange blocks have reversed gravity and can crush you from below! Yellow blocks stick to other movable blocks, so you have to figure out how to manipulate blocks to your advantage as you reach for that Michael Jackson jacket just as much as you need to dodge them.

Fallin Love comes with 54 levels (meaning 54 costumes), with an additional pack of 18 extra-tricky levels available as an in-app purchase. The Survival mode tests your ability to grab random hearts while being chased down by enemies, and the Social mode contains five bonus levels unlocked by milestones of hearts collected by all players around the world (two levels have been unlocked as of the time of writing). Since there's not much else to use in terms of ranking your performance, this is ultimately the only payoff for the hearts you collect in the game (aside from the perfectionist's pride), but this isn't necessarily a bad thing. Fallin Love is a clever puzzler that you can play for the enjoyment of the game itself rather than worrying about metarankings and leaderboards. So grab your farmer duds and get ready to swing into... Wait, Kaisa's into paper-bag costumes now? OH COME ON!