Small business owners these days really need to watch the bottom line. Peasants often don't have a lot of magic beans to spend, and Persuasion Trolls only go so far as a marketing strategy. Keep your prices reasonable and stock up on Pixie Dust. It also helps to have some in-store entertainment, like a jester, so your customers don't get bored while waiting to purchase a potion that will put out the fire on their heads. 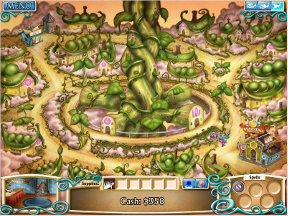 What? These factors aren't a concern for modern-day entrepreneurs? The citizens of Onceuponia beg to differ. Strange and disturbing curses run rampant in the land and a quality potion store is hard to find. You'll need a shrewd head for business to succeed at Fairy Godmother Tycoon, a fabulous game of the (surprise!) tycoon genre.

The Fairy Godmother's monopoly on the potion business is on the verge of collapse due to some healthy competition, so she hires a promising young assistant to reestablish her empire. You start off in the Tutorialville store with one simple potion recipe unlocked and need to work your way through the various villages of Onceuponia. Discover new potions to sell, upgrade your store and warehouse, hire corporate spies, knock your rivals out of business, and, above all, accumulate copious amounts of cold hard magic beans.

There are two sections to your day: preparation and selling. In the first, check the daily forecast. Is there a high chance of Broken Hearts or Giant Head? Purchase ingredients for the respective curative potions accordingly. Need to increase your brand awareness? Hire Pop-Up Gremlins for the day, adorable little creatures that jump up and down while waving eye-catching signs.

When the store opens, keep an eye on the action while villagers meander around town. With the help of various spell upgrades, you can adjust your potion prices during the day or order a Flying Elephant Drop to restock your supplies. Each level has a different goal to reach, whether it's forcing your opponents to shut down their store or accumulating a certain amount of net worth.

Occasionally you'll have the opportunity to hire free-lancers, like stinkbugs guaranteed to drive customers away from another store in town or Pandora, whose curiosity results in unpredictable outcomes. Other fairy tale characters will also pop in from time to time in search of advice or favors. Help them out and there may be something in it for you. 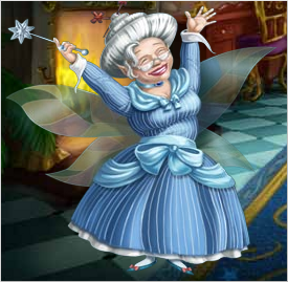 Analysis: A tired genre gets a sorely needed infusion of creativity in Fairy Godmother Tycoon, a basic tycoon game wrapped in a pretty, pretty package. Gameplay doesn't deviate from the fundamentals of the genre, but there's so much more here to enjoy that it simply doesn't matter.

The heart of the game lies in its fractured fairy tale humor, which is consistently funny from start to finish. Puns and wordplay abound, while every character you meet has a distinctly quirky personality, from the aptly named Prince Combover to a litigious Jack & Jill to the obviously evil Sneersworth. Spell summaries, potion titles and ingredient descriptions alike all have the same tongue-in-cheek sensibility.

Since the game was released a couple of years ago, some of the humor is admittedly a bit dated (Mad Cow jokes, anyone?). However, anything that references Arrested Development gets a free pass from me. This lighthearted spirit extends to the crisp bright graphics. Some poor cursed peasants actually do have inflated heads, while others can't stop singing, at least until they drink their potion. Each village, from Sure Would Forest to Castle City, has a different look, as does the cast of characters.

There are a few things missing here, however. A chart showing what the previous day's prices and forecast were is sorely needed. The ideal price varies by demand, and unless you've upgraded your spells, you can't change pricing once you open the store. A larger variety of curses and potions would be nice, but it would simply be icing on the cake.

What we have here is proof that there is no need to overhaul an older genre in order to make a fun and addicting game. Instead of fading away as just another tycoon game, a commitment to style and quality makes Fairy Godmother Tycoon a standout in an overcrowded field.

Fairy Godmother Tycoon is available to download from these affiliates:

I'm pretty sure this was already reviewed at Jayisgames.

Not according to the search engine, it wasn't.

FG Tycoon is an older game, but a good one. Kate is right about it being consistently funny, which is a hard thing to pull off in a game with such an outrageous setting. I still play it frequently, and the demo should be given a chance by anyone who likes tycoon games, fairy tales, and goblins in three-piece suits.

Thats our society we live in, the games that train us how to think, how to me a good member of our society. How many games are not about romantic capitalism in all kinds if they are not about fighting (a.k.a competition)?

Oh yeah, I played this game a long time ago, and I enjoyed it.

One word of warning... seems Big Fish automatically adds you to their Club promotion if you buy this (and others) -- not 100% sure but I don't remember being given the option but luckily checked my receipt emails.

Cancelling it is easy but you run the risk of being charged $6.99 every month for a game credit (if I understand the promotion correctly). Good offer, but I'd rather remain in control of my spending.

Hey, just to let you know that this post and two others are wrongly tagged "affilate" instead of "affiliate".

It saddens me that this game isn't more popular. Replay value is high, because giving different responses to the fairytale characters you encounter can change everything.

FGT is great. Try it if you like Tycoon games or fantasy.