Few things are as exciting as a well-made casual solitaire game. Well, few things that aren't cake, hugs from puppies, or driving up to a traffic light just as it turns green and starts dispensing candy. In the absence of that miracle, though, the latest game from Big Fish Games Studios will certainly fill that fun-shaped void in your life. Fairway is an enormously well-polished game of golf-themed tri-peaks solitaire. Take cards from the pile, pair them with the face-up card below, uncover a few neat power-ups, and try to clear the screen without breaking par! 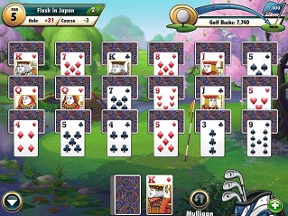 If you've been around the casual gaming scene for some time, you'll remember Fairway Solitaire, one of the genre's first big breakout hits that still stands tall to the scrutinous eyes of gamers. Since then, a number of themed solitaire games have hit, including Soccer Cup Solitaire, Heartwild Solitaire, and Faerie Solitaire, each taking the decades-old card game and spicing things up with new layouts and power-ups that really change the flavor.

An arrangement of cards sits face-down on the screen with the bottom row facing up. Below is a deck of cards with one shuffled out for you to see. The goal is to eliminate cards from the top half of the screen by removing face-up cards that are either one above or one below the shuffled-out card in value. For example, if the key card is a five of hearts, you can slide a four or a six of any color or suit on top of it. Move as many cards as you can before clicking the deck for a new key card. When the deck is depleted, the round ends.

Fairway makes things interesting by using golf-themed elements to add challenge to the. For example, you'll often have to eliminate sand or water trap cards in order to gain access to locked stacks of cards elsewhere on the screen. The undo button is called "mulligan", which is a nice touch! Between levels you'll also have access to a store, allowing you to spend your hard-earned golf bucks on some really cool pieces of equipment. X-ray glasses or a heads-down trainer, anyone? 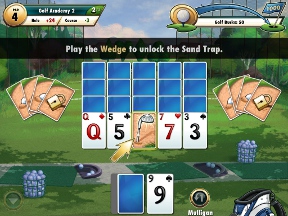 Analysis: Fairway may look simple, but it does a great job adding a new dimension of play to a simple card game. Between the shop, the power-ups, the in-game obstacles, and the hilarious story involving gophers, you won't have a hard time deciding whether you should pick up this game or go sit down with a deck of real-life cards. That's not even taking into account how smooth the game looks or how utterly playable it is!

Not a golf fan? That's totally fine, you don't need to know a thing about the game to play Fairway. In fact, it might even be better that you aren't a golf master, as the gameplay elements that take inspiration from the real life game have almost nothing to do with each other. Completing a level under par, for example, just means running through your deck and leaving a maximum number of cards on the screen. If par is three and you end the level with four cards, your score suffers.

Fairway is a superb solitaire experience that hits all the right points for a casual card game. It looks great, plays without a hitch, and features enough extras (including mini-games) to make it feel like much more than your basic "lay a card here until you win" release. Give it a "shot", see if it doesn't "trap" you from the beginning!

So is this game different from Fairway Solitaire in any way other than the graphics and visual design?

This is from my rep at Big Fish:

It is a completely different game:

It truly is a different game with very small cross-over on a few game mechanics.

So, while similar, this new game has been completely rebuilt from the ground up.