Bart Bonte is back (ok, so he never really went anywhere) with a brand new game, this time on iOS! Factory Balls began as an entry in one of our early Casual Gameplay Design Competitions in 2008. The puzzle game has grown and expanded since then, producing several sequels and finally landing on mobile devices with a stylish visual upgrade. Get ready for a new generation of infuriating, satisfying sphere painting! 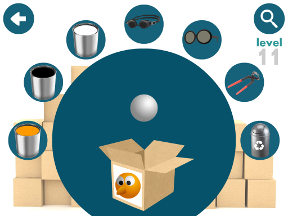 The idea behind Factory Balls is you need to alter a blank sphere to match the image marked on the box. Surrounding the center are various colors of paint, seeds, watering cans, belts, hats, glasses, tools, and other items, all ready to take part in your quest to get this thing decorated. Either tap the items or drag and drop the ball on top of them to begin. Most actions affect the entire sphere, whereas other actions are there to serve as blocking agents or add other physical features. Don't want the entire ball to be painted fuschia? Put that hat on there and paint it again, see what happens. By using a combination of these items in the correct order you can eventually recreate the image on the box in perfect detail.

Factory Balls is a great fit as a mobile game. Not only does it control well on a touch screen, but its brand of puzzles are perfect for casual on-the-go play. 44 new levels provide a great challenge, and with no in-app purchases or other wacky gimmicks, you can sit down and get to solving without a care in the world. Well, no cares other than worrying about how you're going to recreate that spotted pattern on a sphere that looks like a big mouse-eared elephant.

Played this last night on an iPad mini. The game is really well suited to touch control, much more fun than on a desktop. Would love to see the past versions ported to touch as well. Go buy it!