Waking up with no memory? Check. Underground abandoned facility? Check. Creepy mutant monsters wanting to nibble on your face while you have limited ammo? Check and check. Facility Z is ready to play. This action shooter, by Mina Ta may not have the most in depth or original story line, but the game play keeps up with everything you want in a zombie horror shooter. With eleven levels of nearly maze-like areas nothing is simple for poor Kyle even with the help of Dr. Greg Sanger who tries to guide him over the radio. The good doctor needs you to hurry to him while he's still alive and not being chased by anything greenish, but not before gathering up the data disk of research he has been conducting otherwise years and years of work will have been a waste. And since you're the only one apparently left functioning and able to fire a gun, it's up to you to help and escape with your life. 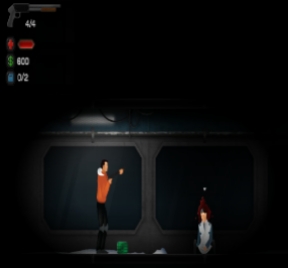 The tension Facility Z creates is pretty tangible, with its limited view, both in front and more so behind, as well as the screeches of the creatures before they attack. It's nothing that will leave you quivering in your chair, but it's enough to keep your trigger finger tense at all times. Monsters can come from above or below so you're not too sure of your steps, and if you die and you to start back at the beginning. The difficulty in this game keeps it challenging but not impossible... well not too impossible. There may be some struggles, seeing that if you die, you don't come back with the ammo you spent but you do get to keep your cash and there is nearly always an easy locker/vending machine close to the start to let you refill. Keeping your health high is a necessity and sometimes if your arsenal is good enough and the distance between you and the entrance door is short, dying to refill all your health isn't a bad idea. There are three main goals in each floor... gathering the data, finding the exit, and oh yeah, finding the generator to give power to actually open the exit. Thankfully the levels are planned out that they shouldn't end up dragging out. You shouldn't be stuck on a level too long unless you just can't click fast enough to shoot the charging little buggers in the head. At the same time, without a map and surrounded by darkness (even with blinking lights... someone explain that to me...) it's still easy to get lost. Facility Z ends up rather balanced, so if you find a small flaw that makes you frown there, is an equal strength that will have you playing on.

What kind of zombie game doesn't reward headshots, and has the zombies lose their heads regardless... several shots BEFORE dying?

Yeahhh, once I realized that I just started shooting at their chests. Always disappointing when head shots are meaningless.

Woops, I typed the wrong name. My bad, Nicholas

I know. I hate to call them zombies when they lose their head and still keep going. But perhaps they've been genetically spliced with chickens?

they have been spliced with insect DNA and insect stem cells, thus it is not surprising that they can still keep going when they lose their heads (some insects and animals can still move when they loses a part of their body parts)

I kind of stopped after finding

the "Headcrabs" and "Barnacles". They even use the same sounds. It took away all the suspense I had going after the first sector.