From the horror-themed hidden object masters at Vogat Interactive comes F.A.C.E.S., another casual adventure tale filled with mystery, occult occurrences, and plenty of strange human abilities. You play a young woman who can travel into photographs and carry things back to the real world. She's trapped in an asylum at the game's outset, however, and knows she's about to endure the scientists' final experiment. Not good! To escape, she'll need to find the right photographs and scurry her way out into the world beyond! 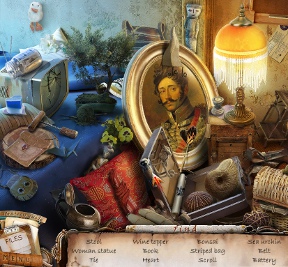 The scenes in F.A.C.E.S. are fully packed with things to investigate, and if you choose Advanced Mode from the beginning as opposed to Casual, you won't be notified of areas of interest. Use your mouse to click things you'd like more information about. A number of spots have close-up views available, while others present you with a bit of information, a hidden object scene, or an item for your cozy little inventory.

Puzzles are everywhere and you'll find more questions than you will answers during your first pass through each section. Hidden object scenes are frequent in F.A.C.E.S., but they're generally short and not too difficult to solve. When you complete one you're rewarded with a new item that stashes itself in your inventory. Use it to solve one of the many pressing puzzles standing between you and the next area!

Most areas in F.A.C.E.S. are solved without too much exploration or head-scratching on your part. Many puzzles require you to find a certain number of an item scattered around a few screens or stashed inside hidden object areas. Logic is your friend, and the game never twists things around for the sake of pumping up the difficulty or lengthening the experience. 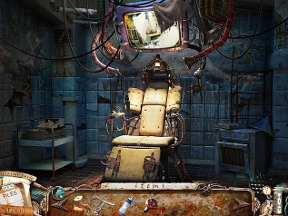 Analysis: Vogat knows hidden object adventures, and F.A.C.E.S. shows the studio has gotten the formula down to an art. The visuals are, as expected, grand, and the all-important atmosphere is spot-on spooky. Some really disturbed people must work at Vogat to conjure up some of these events, but they make for a great casual hidden object game!

One interesting fact about F.A.C.E.S. is that it features no voice acting, just haunting music and silent text to read. The sound effects are rather sparse, too, creating a cut-off, eerily quiet world for you to explore. You really feel like you're stuffed inside this crazy(?) girl's head, lending a somewhat twisted slant to the game as a whole.

The bonus content in the collector's edition of F.A.C.E.S. includes a chapter that adds another hour or so of gameplay. You can preview this mode before purchasing, which is a great option for those of us who like to try everything out before we buy. All in all, F.A.C.E.S. provides around five hours of play time (not including the bonus chapter), which is a bit longer than most hidden object games on the market.

While F.A.C.E.S. is yet another asylum-based mystery hidden object game, Vogat has a special talent that turns these experiences into genuine fun. If you're ready for a great story that's filled with haunting images and smart puzzles, F.A.C.E.S. was made for you!

Inside the Consultation Center - The Kitchen

Return to the foyer.

Click the telephone to repeat the hidden object scene.

Inside the Consultation Center - The Kitchen

Return to the foyer.

Click the telephone to repeat the hidden object scene.