Shooter games are, by their very definition, typically a fairly straight-forward affair that involves putting bullets in things until there are no more things to put bullets in. But Vitalii Zlotskii proved you can teach an old dog new tricks, or at least twists, with Experimental Shooter, and the follow-up to that surprisingly puzzle-y game is here with Experimental Shooter 2. Controlling a sassy, chattering cannon (on wheels!) with [WASD] or the [arrow] keys, you aim and shoot with the mouse to remove all of the bouncing projectiles in a level. Simple, right? Wrong! The twist is that each stage, while it might look the same, has its own set of unique rules and mechanics for you to figure out and master in order to win. 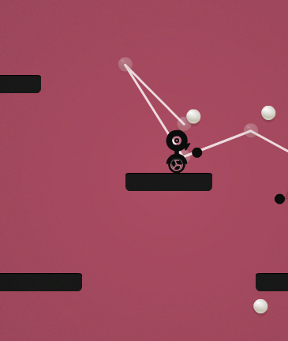 Like the original, it's a clever concept that keeps its simple gameplay fresh and interesting throughout, proving a little ingenuity can go a long way when it comes to game design. Also like the original, however, some stages are more interesting than others, resulting in a few levels that come down to simple timing and patience instead of cleverness, which can be a little frustrating. The sequel revisits a lot of concepts from the original, though the introduction of platforms makes them a bit more challenging, but it also has its fair share of new ideas. The end result is a game that will challenge both your reflexes and your observational skills, without shaking up what made the original so popular too much. Wrap that in a simple yet sleek design and a bouncy soundtrack and you've got a recipe for success... or at least a fine way to spend a break!

Quite a fun little game to play. Enjoyed it immensely. :)

The ending genuinely made me a little sad, as weird as that sounds. Love the little guy :'(

On both Kongregate and here, I have the shooter going all the way to the right and staying there. No way to get out of the corner.

Hi Alkalannar! I had the same problem initially on almost the same setup (Firefox instead). I found tapping the D or right arrow usually fixed it. This is something that I run into on a lot of Flash games from time to time, and in my case it's usually caused by having a movement key held down when a cutscene or something ends.

that was a lot of fun. however.
WHAT WAS UP WITH THE ENDING. OH MY SWEET JEBUS.