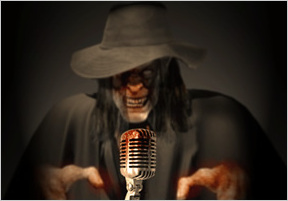 After receiving over 60 entries to the voice-over competition for Exmortis 3, and after much deliberation over the short list of 10 that was subsequently made, Ben has finally come to a decision on who the lucky person will be...

Mr. Lucien Dodge will be the voice of the narrator for the upcoming game! The majority of other entries were of a mind-blowing quality, but Lucien's "unique interpretation of the dialogue" fit what Ben had in mind "almost perfectly."

Also because of the high quality of the other entries, no doubt Ben will be in contact with a few entrants from the short list to possibly fulfill other roles as they are created in the authoring process over the coming months.

Congratulations to Lucien, and many thanks to everyone who participated by sending in an audition recording. =)

Congrats to Lucien! Having had fun with the previous two games, I'm looking forward to the third installment of Exmortis. If the voice-acting comes anywhere near that of Eternal Darkness, it's going to be an atmospheric adventure! :-)

To be fair, with a name like Lucien Dodge, the others didn't stand a chance...;-)

Would you like to get an idea of how Lucien sounds? Check out these demo pieces at Lucien's voice acting resume page. I've found some really promising, spooky examples there. :-)

Ah well, back to toiling in illustrative abscurity.

Congrats, Lucien. Good animation demo you got there.

Keke. XD. Lucien Dodge is a Very Exmortis name. I'll have to actually play exmortis 2 before I play three. But, Voice acting!

My failure to win is my dishonor. I shall return to my lair and lick my proverbial wounds, but next time Lucien...next time.

Eh, I sound like a dork anyway (sadness overflows)

Ah, bullocks. I should have recorded mine in a studio...

Kudos, Lucien (which, on a side note, is perhaps my favorite first name of all time). If you read this, I can't wait to hear you in the new Exmortis.

OMG!! I've been a fan (stalker) of Lucien's for years! Always pegged the characters performed. Congrats to the awesome gig, Lucien! I now expect the VAAs to flood this place ^_^

I hope he has auditions for female voices ^_^

I just might... but I won't know until I get further in to the production of the game... so don't give up hope just yet! :)

And I must say that I was unaware of Lucien's experience and background before awarding him the role... so my judgement was based upon the merit of his entry and nothing else - as was the case with every other entry I went through.

So I'm happy to learn that he has a bit of a following because I am sure that his involvement in this project will now bring a touch of class to this title :)

Congrats!! But what im trying to find out about this game is when is it going to come out!!! ive been waiting since december and its driving me insane! Someone please let me know so i dont end up playing myself to death with the first and second lol!!

i cant wait till it comes out

i hope the third one is as good as or bettter than the first one. because usually if something is a series the first one is the best and the last is the worst like rocky. but anyway i really really hope that it's good because then the dude who mad it i think it's ben and then something with a N will be like famous! so make it good Benny!

when is it going to be out its taking forever put it on newgrounds!!!!!

I have to agree with AJ.
That's a perfect name for someone like the described character.
I'm sure his tape was great too though...
=)
I would've entered if he was looking for a female, unfortunately, he wasn't.
lol

Any idea how long it might be till Exmortis 3 is up and we can play it?