SCFWorks' Exit Fate is a massive free indie RPG that's got a bit of a bad reputation. Originally released in 2009, it sported an enormous playtime with hand-drawn artwork, an epic story, a huge cast of recruitable characters, and a story a lot of people felt was a pretty clear rip-off of Konami's 1999 Playstation release Suikoden 2. And, y'know, for the first few hours, it's hard not to see a comparison. Stop me if you've heard this one. A group of friends who grew up together and now find themselves in the army get caught up in the conflict between two rival countries and ultimately fall in with a rag-tag faction of rebels they'll need to lead to victory, which pits them against former friends and allies as they make hard choices and lose people they care about along the way... oh, and, uh, there's a battle with a wind monster early on, too. Though the plot specifics are actually very different, Exit Fate's format, mechanics, and even graphics and sound are so clearly taken from or "inspired by" Suikoden that it had a lot of people crying foul. Despite this, however, there's an undeniable amount of work, passion, and talent behind Exit Fate that makes it an ambitious game that succeeds more often than it fails in saluting the genre and source material. With hand-drawn artwork for every character, a whopping 75 party members to recruit for your growing castle, challenging turn-based battles, and a complex story that blends fantasy with political turnabout, Exit Fate is a huge achievement from a single developer that will keep JRPG fans busy for a long, long time. 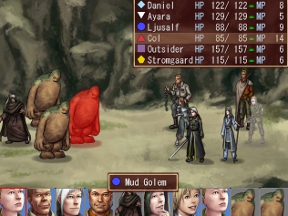 The actual plot concerns Daniel, a colonel in Kirgard whose pacifist philosophies wins him few friends in the army with a war looming. Even his childhood friends Angel and Jovian have little patience for his concerns, seeing them as little more than idealistic whimsy. The night before a pivotal battle, Daniel's encampment is attacked, but just as he's rushing to aid his division, everything turns black, and when he comes to, he finds himself in enemy territory. When he tries to return home, he doesn't exactly get the warm welcome he expects, Daniel makes a drastic decision to end the fighting no matter what. As Daniel and an increasingly growing number of allies, you'll travel the world trying to secure political agreements, take part in wars, and as you might expect, find out a lot of secrets about everyone and their pasts that might endanger everything. While many characters will join you automatically, many others are optional and can only be recruited if certain conditions are met, though you'll need to figure out for yourself just what they are. How do you figure out if you can recruit someone? Well, just look for the only characters in the entire place important enough to have their own faces.

Exit Fate plays like essentially every JRPG released when the genre was at its height of popularity. Battles come in random encounter flavour and are turn-based, with the icons beside each character denoting the element associated with them and the pictures at the bottom of the screen showing you the order in which everyone, including enemies, will attack. If you really don't want to fight, you'll occasionally get the option to bribe your way out of a random encounter before it starts, but as you'd expect from the genre, Exit Fate needs you to grind a whole lot of levels to defeat bosses, so don't go makin' it rain left and right. Magic is actually a commodity you can buy in units, and while anyone can use a spell provided they've got the magic points, which increase turn-by-turn in battle, naturally some characters are more powerful spellcasters than others, and having someone cast a spell of an opposing elemental type will mean it won't be as strong.

The other type of combat you'll encounter are wars, when your forces clash with the enemy on a bigger scale. You'll command units comprised of hundreds of soldiers and move them around on a grid by turns while your enemy does the same. When you attack an enemy unit, the number of soldiers in it will drop, and when all the soldiers are gone, the unit is defeated. Units with heroes in them (the characters you'll recruit) tend to be much more powerful, and different unit types like archers and mounted soldiers have different strengths and weaknesses too. Depending on how well you fought, when you win the battle you'll be granted a reward. Of course, there is no greater reward than not having to fight one of those battles again for a while, because they're really, really boring. 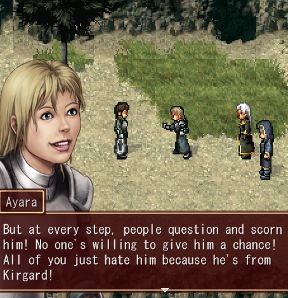 Analysis: Exit Fate is so clearly a love letter to early console RPGs in so many obvious ways that not crediting all of its influences (and music, and sprites... ) feels a like a little disingenuous, as well as an oversight, because if anything, Exit Fate deserves to be compared with those console classics in a positive light. It's not just how long it is, although its huge play time makes it even more mind-boggling that it's available for free, it's how well made it is. Despite the fact that character portraits rarely match the topic of discussion ("Hey, I just witnessed my entire regiment get slaughtered, but gosh is it a smiling kinda day!"), the artwork is fantastic both in combat and out. Where Exit Fate absolutely shines, however, is its story. It's a complex plot full of well thought out political and military crosses and double-crosses, though things get a little crazy past the middle of the game when the story starts becoming less about the war and more about Daniel directly. Daniel, unfortunately, is essentially unbuttered toast when it comes to having a personality, and while it's clear he has an amazing military mind, he never really develops enough character to make him compelling. He's just so bland and... tapioca-like it makes me want to push him down and girl-bully the heck out of him. "Shut up, nerd! Give me your lunch money!" "I bet you wouldn't treat me this way if I was Sephiroth! Just wait'll I get my new hair extensions!"

Most of the game's problems are ones shared by other titles in the genre. Random battles, level and loot grinding (so much grinding), palette-swapped enemies... though there are a few areas Exit Fate still could have used some shoring up. Most dungeons are simply long slogs with the occasional treasure chest, and the lack of an auto-battle option makes forcing your way through the random encounters more tedious. The enormous variety of recruitable characters and the way elements can impact a battle, however, means you can most likely turn a seemingly impossible fight around simply by trying it with a different roster. It encourages strategic fighting instead of just hammering against a boss until you beat it, and also to play around with different heroes instead of sticking to your favourites, although good luck prying me away from a group that can consist of a cat, a vampire hunter with weird ideas about vampires, and a skeleton. It just has such a wonderfully kooky roster, if not a particularly diverse one unfortunately, that tracking down everyone is fun and rewarding, and, as in Suikoden itself, helps you feel like you're actually fighting a war with your friends and allies. While Exit Fate doesn't really bring anything new to the genre, in spite of the assets it uses from other games, it still represents a huge amount of work and effort, and is the sort of thing any fan of classic console RPGs will feel right at home with.

SCFWorks' other big title Last Scenario is fantastic as well, and it is one of my favorite JRPGs of all time. Cannot recommend it or Exit Fate enough!