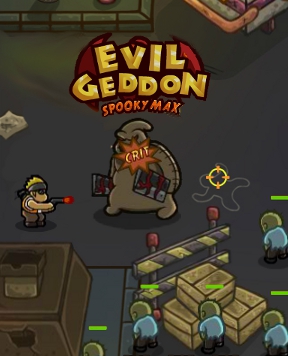 When there's somethin' strange in the neighbourhood, who ya gonna call?!... well, uh. Apparently nobody, since you're all by yourself in Firebeast's arcade shooter Evilgeddon Spooky Max when an evil force takes over and floods the streets with monsters. Armed only with your trusty peashooter and whatever weapons the baddies helpfully (though perplexingly) drop on death, you'll have to grind your way through dangerous locations filled with waves of monsters, dealing with the baddest boss in each one, before you finally get to set things right once and for all. Use the [WASD] keys to move, the mouse to aim and shoot, and [spacebar] to cycle through your available weapons.

Each stage will release various ghouls at you in waves, and if you survive 'til the end, you can take a crack at the boss. Avoid blasting any ghosts, since they'll drop supplies to you if you touch them. Die, and, well... just try again. Between stages, you can visit the upgrade shop to spend the coins you earn increasing your arsenal, or stars, which are granted for completing special objectives and leveling up, to make the hero himself stronger. It's the sort of game you'd call "grind-tastic", and whether that's a nail in the coffin depends on if you enjoy the sort of achievement-driven gameplay and the repetition of guzzling coins 'til you're buff enough to proceed. It's worth mentioning that I occasionally seemed to encounter "sticky" terrain when moving and I would appear to get hung up on invisible objects, though immediately tapping the movement key again would fix it. It's a simple game that could have done with some more instruction in some areas, but has a great, smile-inducing quirky design. What makes a hero? Not muscles or great one liners. It's all about the hair, man, and the courage to wear your sunglasses at night.

Do you like to grind?
Well grind you shall.

Some games are able to scratch my neurotic itch in grinding for upgrades, this games is one of them. Evilgeddon has a very well balanced system for upgrading weapons, skills, rewarding achievements, gaining experience and tons of things you can throw your well earned zombie coin at if you're a consumer whore.

The only downside is, the game is HARD. I've bought and upgraded every gun in the game to it's max and I still fail to beat the 3rd stage boss. The game is fun and is able to hold my attention despite it's difficulty (maybe I just suck? I dunno) but it's definitely worth a shot, or a hundred...

1. Pay attention to your experience requirements, try to get all three objectives met in one round, this will be your main source for gaining skills.

I'll agree with that. While I have yet to upgrade everything, the third stage boss health makes it take forever for drain. As for your tips yes, Both of those are correct.

To help out here is a list of what each secret holds:

C1: $3000
C2: Use rocket launcher to deal more damage on mummy
C3: Get 3 stars by clicking the trash bin in stage 2
C4: Try to unlock achievements, their rewards would be helpful
C5: The faster you call the next wave, the more bonus HP heal you will get.
C6: Handgun upgrade: accuracy increased.
C7: It's not recommended to take the wolf dude at close range.... You know the weapon for assassination right?

A1: $10000.
A2: Use sniper to deal more damage to witch.
A3: Get 3 stars for clicking on the mailbox in stage 1
A4: Kill faster and avoid enemies to increase your combo rate. Once you enter fever state enemies will likely to drop gold.
A5: Critical deal x2 damage.
A6: Get 3 stars by clicking on the painting in stage 3.
A7: Well the hero's name is......Maho. He is a far far far very far cousin of Marco in Marco's Panic game.

S5 and S6 are cheats that can be used during combat.
Note: that the cheats will say the cheat is used if you input them when you pause the game, but won't be applied to your character/gun.
Also the cheat must be input each time for each use.
This makes it almost impossible to use while being chased by monsters.

Also I forgot to mention I found 2 bugs in the game.

and when the boss started to chase me he kept running and running. I ran away from him and got him off screen. I kept hearing him run, but not show up. Guessing he was stuck on something I went up and he was gone. I had to quit or fend off endless pumpkins.

The second on is not a big problem, but just something I found out. I you turn off the sound effects when you face the 3rd boss, his ranged pentagram attack still makes a sound. I found this out the hard way..... I wasn't expecting it and it startled me when I had both the sound and music off and my earbuds in.

I also found that

I never received the promised 3 stars that came with clicking the trash can on level 2. I'm assuming that it's the one by the fountain because I haven't seen another one on the level.

I also have been unable to

find the statue's mask on level 3... I've clicked on the faces of all 4 suits of armor along the back wall but none gave me 3 stars. Anyone know where that is?