Eufloria, formerly known as Dyson, is a real-time strategy game built around the concepts of simplicity, ambience, and gentle pacing. It plays like an evolved version of Risk or Galcon Fusion, where sheer numbers and a good strategy are all you need to dominate. Eufloria isn't about warriors battling over blood-soaked soil. It's a slow, organic game that uses plants as its inspiration, challenging you to expand a seedling empire one asteroid at a time. 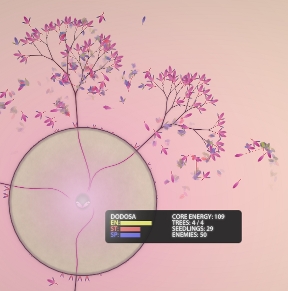 In Eufloria you are given control over creatures who live in an interstellar ecosystem. You expand their habitat by finding asteroids and sprouting Dyson trees, a plant that grows roots to the core of each asteroid and spawns seedlings. The more trees you plant, the more seedlings you have to defend your territory and wage war against the enemy.

Eufloria can be played entirely with the mouse, and ordering your seedlings around is as simple as can be. To deploy troops, click on the center of an asteroid and drag the mouse outwards. A green arrow appears that can be adjusted to send out a few or all of your seedlings. It's always nice to overwhelm your enemies with swarms of attackers, but don't leave your asteroids vulnerable, or you'll find out how frantic Eufloria can get in a pinch.

There are a handful of modes to unlock, but if you like, you can click the "unlock features" button to give them a try right away. The main game is a good place to start, though, as it gets progressively more difficult and introduces key concepts of the game at a gradual pace. Skirmish arena mode is a more battle-oriented mode that pits you against swarms of baddies bent on taking over your lone asteroid. Dark matter is the same as the story mode of the game, only now everything's dark, mysterious, and quite a bit more dangerous. There's even a slot to utilize community-made levels and mods! 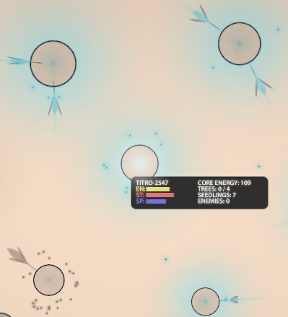 Analysis: Instead of worrying about gathering resources, which soldier types to train, which buildings to construct, or which branch of your technology tree to research next, Eufloria makes everything simple. No tech tree. Two buildings. No resources. One kind of unit. Well, the last two aren't true in the strictest sense, but you get the picture. Eufloria is about ambience, not stat tracking, and it accomplishes this with extraordinary style.

As time passes, your Dyson trees get better at their jobs, producing units at a faster pace and releasing flowers that can grow enhanced Dyson trees that spawn better units. You can even grow enhanced defensive trees that drop laser mines. Yes, laser mines! This and a few other concepts are explained in the manual included with each download. It isn't necessary to read to understand the game, but I found the extra information came in quite handy.

Eufloria is not a "GRAAA GET YER WEAPONS MEN, WE SHALL BLOODY THE FIELDS WITH THE SEVERED HEADS OF OUR ENEMIES TONIGHT" kind of game. It's a game of careful thought, slow planning, a few snap decisions, and a lot of waiting. It's one of those titles a lot of people just won't "get", as it's not your typical gaming experience. If you leave your adrenaline-filled, twitch-gaming mind behind, Eufloria is a beautiful experience that will really grow on you.

I really want to play this game, but my demo doesn't seem to be working properly? Whenever a text box with information comes up, it just comes up as a white box. If I press the OK button, as the box fades away I can see there was writing... I just can't read it!! Is this a bug, or did I do something wrong?

Ah, thanks JohnB :) I had a look in the forums, and seems I'm not the only one with this problem. It looks to be some kind of problem with my video card not rendering a texture properly. If anyone else is having this issue, I found a temporary fix in the forum. If you go here --> http://rghost.net/551563?r=3508 you can download a replacement for the texture that's not working. You replace the file MPL_00.png in the Resources folder of Eufloria with the download, and all works perfectly! I think the creators are trying to fix the compatibility issues though, so fingers crossed :)

It's getting late for me, so I must dash off to bed, but so far this is a good game :) Relaxed, calm, but quite strategic and involved at the same time.

Is there a way to zoom without a mouse wheel?

Yes there is. PageUp & PageDown.

I. Love. This. Game. I LOVE IT! I love that it plays in the background so i can check my email or whatever while I wait for some more seedlings :).

You know, I really don't think the paragraphs comparing this game to more violent games was really necessary. Beyond the fact that this is a casual game site so there's really not much need for it, and the fact that I've seen dozens of such reviews so it's starting to become derivative, it really does sound like talking down. This is far less bad than some others I've seen, but when you make the comparison like that, it can easily come off as "You violent gaming Neanderthals can't comprehend this artistic non-violent game, so I will explain it to you!" Again, this one doesn't do that that much but I've seen too many that do and I felt like I had to get that off my chest. :)

Black Drazon: I didn't mention the word "art" in the entire review, and I certainly didn't mean to imply anyone was a neanderthal. All I'm saying is that real-time strategy games are usually focused on a rougher style of combat, whereas this one is plants and bugs and the occasional laser. :-)

When your concerned with stratergy, say making sure your probe prevents that second hive expansion in the first 3 minutes of the game or attempting to mind control a building to deploy a signal transmitter and call a mothership...

Well your not really paying attention to the blood and the gore, your more concerned with attempting to rellay 60 - 150 commands per minute...

Stratergy games look pretty and it's nice, but "rougher styles of play" are hardly evident in most RTS.

That said Eufloria is an awesome game, and I LOVE the name.

I have the same graphics problem as others. I tried to use Squiddly's fix but the Resource file is read only so I can't replace that file. I guess I'll have to wait until they find a fix for the problem - it sounds like my kind of game!

I have followed Dyson's development for a long time and I have to say that, while I'm glad the game is finally out and ready, I'm really disappointed with the name change.

With "Dyson" as the title, you feel like the overlord-hive-mind of an army of very simple, but very dynamic machines. Machines don't need to represent enemies, allies, or resources with high-quality 3d renderings. A simple sphere, and some triangles with colors suffice just fine. To me, the simple and elegant aesthetic added to the atmosphere and immersion factor when coupled with "Dyson" and all of its connotations.

The word, "Eufloria" however doesn't do that for me. Now instead of being the leader of an army of aggressive, self-replicating robots I'm just pollinating seeds.

It's a really silly rant about something very minor, I know, but I felt the game was nearly perfect before. It's still amazing, but the title doesn't click with the premise anymore in my mind. That said, if you love Sci-fi or the RTS genre at all, play this game now. Right now.

I didn't like the name change, either. It wasn't necessary, in my opinion, and it could hurt the branding. I like the new name, but you're right, CapnHulk, it changes the feeling of the game somehow...

Damn I wish there was a browser version (or at least a Mac). I really want to play!

Now that I have the time to review it properly - I love it! It's a great game, there's action without you ever feeling too stressed out. And it's quite gorgeous. I love strategy games, and I love how chilled out this one is. And I don't think I've ever seen a game about plant warfare either :) An unusual game, very fun!

As for the name change, I think they probably had to change it for legal reasons? Here in the UK, Dyson is a company that makes vacuum cleaners. That's why I thought it was hilarious when what it was originally called. I like Eufloria much better though :)

I cant even get it to install

For those that have the issue when trying to install the demo and a black screen appears momentarily after a second of installand then the install stops...you need to install dotnetfx.exe first before you try the install. Google it and find it at the microsoft download center. After you install it, the Eufloria install will work (If you look closely at the black screen on top when there is the error, you can see that dotnetfx.exe is shown on the top of the pop-up window.)

I love this game, I sat a played it for over 2 and a half hours!

Does anyone know how you choose your color? Somehow we lost our game progress, but now that we are starting over it just isn't the same without our original team color. Now it has just been assigning us random colors.

I received this game as part of an Indie Developer game pack on Steam. It sat on my hard drive for a while and only yesterday did I actually play it. I wish I had started it up far earlier. It's a great game, especially for someone like myself that get overwhelmed by modern RTS game sporting dozens of units and deep tech trees. Eufloria takes the essence of RTS games, refines it, and puts it into a beautiful package with very cool music. I wish I had started playing it earlier.

This is a great game. I am so glad I bought the full version for my ps3. It is a very slow game so be ready to spend a lot of time watching and waiting.