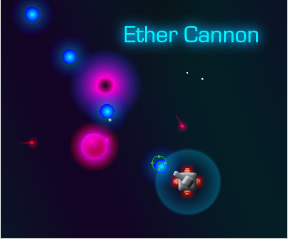 Ether Cannon is a new action shooter from Luke Paakh of Pop Ethos. You control a space ship which is the last hope of... Well it doesn't really say, but it seems urgent.

It's a beautiful game, the particle effects in it are just brilliant, and the action it delivers is (mostly) smooth, polished, and pretty refreshing. The game does a great job of delivering lots of fast shoot-em-up fun without ever reaching a plateau; each time it begins to feel as if you've had the same weapon for a while, or haven't seen a new enemy type in a few levels, something new is thrown into the mix. Even in the very last stages of the game it introduces new enemy types to challenge you to change your strategy, so you can out maneuver and outwit your enemies.

Use the arrow keys to move and the mouse to aim and fire. There are 21 levels in all, most of them consisting of 6 waves each. Each wave pits you against an array of foes out to destroy your ship using a variety of tactics. During these waves enemies will occasionally drop Ether, which you will need to collect to upgrade your ship, and you are given the chance to spend your hard earned Ether between levels.

There are three upgrades to choose from:

Analysis: With there being only 3 upgrade choices, I found that after a while I was just dumping loads of points into my turret with no real noticeable increase in power, as if I'd reached the max, but it didn't tell me. A few different options would have been nice, maybe choosing different weapon types that were already featured in the game, and focusing on one, such as the spread weapon, and further developing that. The biggest gripe I had with the game was that there were no quality settings, and being a flash game that uses loads of particle effects, this is a must. I found that in the later levels of the game with loads of enemies around it was almost impossible to aim properly due to the lag caused by all the effects. A simple quality adjustment would fix this issue.

Apart from a few minor issues this is truly a great game, and I highly recommend taking the time to play Ether Cannon.

I find that trying to figure out which upgrade to go with is sort of vague. As in if I pick the wrong set to go with, I get crushed in the next level.

Due to my upgrade choices I found it a bit too easy until the last level...

I chose to upgrade mostly my shield and turret - in a ratio of 2:1 which meant that I was pretty much invincible as most stuff died when it hit me... and I shot the rest.

Then I got onto the last level, when a bit of agility and speed would have come in handy against the big bugger.

This game really needs a walkthrough to tell you what upgrades are achieved with what levels of turret enhancement. It also needs a save feature.

The problem is, shield upgrade is useless versus the final boss. He kills you in one hit. Maybe there's a level of shield upgrade that would let you survive, but I doubt it. And if he flies faster than you, you have to engage him really, really carefully. Probably the best option for fighting him would be in a ship with enough engine upgrades that it can run just ahead of him, firing back, but I haven't had the chance to see if your ship upgrades that far.

The music's good, but the only strategy I used so far was "spray 'n' pray". Flying backwards while blindly shooting forwards worked until I changed directions; then four of those things hit me at once.

My problem might have been trying to outrun everything, and not knowing how the shielding system worked. Now that I know, I can try again and do better.

Beat it! Here's how:

My upgrades were 109/62/40, and the boss was EVER SO SLIGHTLY faster than me - not sure if his speed was 115 or 125 or what. But I was able to lead him, firing backwards, for a long time. When he started to catch up, usually a little after he started to come into sight but before he was entirely in sight, I would change directions and fly away from him to the side. He would stay on his course, and I would resume mine right after he wrapped around and was further behind me again. Rise and repeat.

The ending was highly satisfying.

To change the quality of any flash game, right click on the game, and select "Quality"

Q: Help! I have no idea how much Ether I should invest when upgrading my weapon!

A: I've prepared this handy upgrade chart that tells you how much Ether you need to spend for each upgrade.

Q: Help! The final boss killed me in one hit!

A: That's supposed to happen. Even if you put 1,000 upgrade points into your shields, the boss will still kill you in one hit. You can "graze" the boss and not die, but any other contact will kill you. Also notice that the "sparks" that fly off the boss damage you, although they won't kill you if you have enough shields.

Q: Help! How do I beat the boss if it kills me in one hit?

A: Beating the boss doesn't require any special upgrades. If you made it to the boss, you can win. Maxing the weapon makes it a lot easier.

Q: Help! I want to go faster than the boss so it can't catch me!

A: That's not really feasible. You'd need over 100 Ether allocated in speed to make a difference against the boss. You go the same speed as the boss at around 170. Worse, you can't outrun in-game enemies at 170 Ether. The moral of the story is ignore speed, and dump your precious Ether into shields and guns. Max gun helps more than the 30 or so speed you can spare. The boss is reasonably doable with base speed.

A: It's not much harder than the normal mode. Your starting shields are set to 20 instead of 25, and each level gives you slightly fewer upgrade orbs. Enemies do a little more damage, and they fire more often. The boss is the same.

Another game I couldnøt play because I couldn't adjust/turn off the suond. It can't be that hard

Frederik, you can press M to turn off the sound completely. As far as I know, there is no way to adjust it.

wow, that's intense.
my only complaint - difficult without an external mouse on my laptop.

The final sequence is bodacious except how the remains of the star fly around. Overall, very good music and graphics, still.

Oops...died on level one...really hard...not easy on a laptop. Don't know if it would be any easier with a real mouse.

Quite the excellent time waster. Very good sound, good graphics and gameplay was all right ('pray and spray' indeed, though there is actually a little bit of strategy where to aim and shoot)

Pretty good remake of the oh-so-many 2D top-down space shooters. Though, you'll need a fast computer to enjoy this one.

Beating the end boss is a very doable thing.I had Speed at 25 Shields at 80 and Guns at 100.I don't believe the answer is what to level to what.The answer lies in your RADAR.When on the final level wiping up all the little pests will pose no problem.WATCH for the big red blip.Soon it will be the only one left.Watch your radar ANTICIPATE it,and move away at right angles while firing.It might take 3-5 minutes but it will go down and you will unlock hard mode.