Things are not going well for Hannah. A motorcycle crash separated her from her husband, and she wakes up in a creepy castle staring at a strange figure in the window. Her head hurts, she can't remember anything, and the people in this place won't let her leave. A ghost named Isabella appears who says she once suffered the same fate, trapped in the castle and kept from the one she loved. Now, Hannah is determined to find freedom in the new casual adventure game Escape from Frankenstein's Castle. 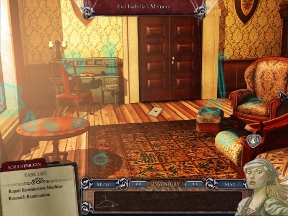 Shuffling about each room, one of the first things you'll notice about Escape from Frankenstein's Castle is that there are items to be found, but no lists. The game is decidedly more adventure than hidden object in nature, so you'll spend your time poking with inventory objects and gathering things to store for later use. When it's time to bring out a collected item, it'll be obvious what you need to use. Otherwise, Hannah or Isabella will let you know.

You'll spend a lot of time moving back and forth between rooms, gradually opening new places to explore. Because backtracking is such a big part of the experience, each area has layers of things to explore, many sub-zones and items only becoming active when they're needed in the story. Some of the books in the library, for example, seem innocent enough until you need a specific bit of knowledge from their pages. This rewards thorough explorers for clicking on everything in sight and remembering where certain items are located.

A really interesting feature of Escape from Frankenstein's Castle is the ghost, Isabella, and her memory ability. Certain rooms in the castle are familiar to her and will trigger a quick 3D refocus, replacing current items with what she remembers from the past. This usually works to give you a clue how to progress, such as showing you a blueprint for a device you're trying to fix. If you use this ability in the starting room, though, you'll slowly piece together Isabella's story using items you find throughout the mansion. It's a great device for filling out the backstory, and the idea of having unnamed items scattered throughout the game is always intriguing. 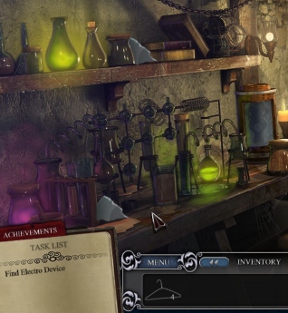 Analysis: Escape from Frankenstein's Castle handles itself a bit differently than most casual adventure releases. It doesn't rely on hidden objects so much, which is always appreciated, and instead shoves the focus squarely on the story and the puzzles. While the plot is a bit contrived, it's told through silent cutscenes and quick conversations that really pull you in.

There are a lot of "figure it out yourself" puzzles that set you to a task and leave you alone, providing more information only if you start clicking on the task list at the bottom of the screen. This lack of hand holding is a great device that lets you adjust the difficulty on a per-puzzle basis. Even the mini-games just sort of throw you into the midst of things!

One thing baffles me about Escape from Frankenstein's Castle: loading screens. And not just a loading screen here or there. Moving through the first six rooms you'll encounter several loading screens, something I haven't seen since the days of CD-ROM gaming. Why they're necessary in a casual adventure game I have no clue, but they go by within a second or two, so they don't break the flow of the game up too much.

Escape from Frankenstein's Castle has a unique look to it and plays a little differently than most of its cousins. You'll enjoy the puzzles and the story, you'll scratch your head every time you see a loading screen, and when it's all over, you'll wonder why it wasn't twice as long.

Nothing? It's definitely not bugged from what I can tell, though it did take me a few minutes to figure out what I was supposed to do.

The game is somewhat like a point-and-click in that you're looking for objects in the room that you can use to solve puzzles with.

In the first room:

there are 8 eyeballs you have to find. Once you find all 8, click on the box at the foot of the bed on the right side of the room, and put the eyeballs in there. That will open a secret door and reveal a key. Use the key on the small jewelry box on the left side of the room to reveal Isabella's lost locket. Then you will have access to one of Isabella's memories, and you can then access other parts of the castle.

I started to enjoy this game and liked the story, but the loading screens between every single room/hallway section (6 to 10 seconds each, easily) got to be a major problem when the game advanced to the point of finding items in the attic or whatever and using them in the cellar, etc. (Remember, this is a castle.) I never finished the game because of the loading screens which started to become the bulk of "gameplay". Otherwise I thought the puzzles and graphics were very well done.

Definitely try the demo before you decide to buy.

Six to ten second loading screens? Wow, mine lasted literally one or two seconds. Differences in computers, I'm guessing? Still, there should be NO loading screens. NONE.

I enjoyed the game, but OMG LOADING SCREENS. I nearly rage quitted, but I stuck it out to the end of the demo.

I have to say, I'm not a fan of games where your character ends up in these bad situations by sheer stupidity.

Kissing while driving a motorcycle. In the dark. REALLY?

Reminded me of Mirror Mysteries where the reason for the calamity is that your character is a terrible parent.

I like to hope that my character is otherwise an intelligent person and this bad behavior isn't a pattern.

I didn't perceive it that way, though. More like, sure they were kissing, but the real reason was because of that mysterious person that appeared out of nowhere and ran them off the road.

It was, after all, by design that they ended up there. Wasn't it?

Could not find fourth powercell. Gave up.

This was a pretty good game, but quite short. I've never managed to finish a game during the demo before.

Power Cells are located as follows:

For some reason, on level 6, the "find the bone" task won't appear on my task list and I can't continue! I clicked on the orange flask and everything! What am I doing wrong?? Please help!

I got the fireplace door open OK and found the door with the rusted lock. I can't make the oil, though, because I can't seem to get the bone fragment.

I found the bones in the kitchen storage area, and I get the dialog asking if I can have one, and getting the OK to take one, but the bone never gets added to my inventory, so I can't make the oil.

Where am I going wrong?

Does anyone know WHERE the metal medallion is, that opens the fireplace? I can't seem to find it!

JIGuest -
Check Level 5 of the walkthrough above the comments.

When I click on the green flask to trigger a minigame... nothing happens. No minigame. However,it does tell me to add orange, but I can't add orange. Because I cannot get the bone fragment. PLEASE help me!!!

JIGuest -
You didn't say why you can't get the bone fragment. Check the walkthrough above the comments for some help.

I can't get the bone fragment because there is no bone to pick up. I clicked all over her boney body, get her permission to take the bone, but no bone?! And, I don't get a mini game when I click on the green flask? It tells me to add orange. I have read the walkthrough and even gone thru every room, thinking I missed something. I can't go any further... i'm stuck...

The bone is in the crack in the wall in the Kitchen Storage. There is a screenshot of the crack in Level 4 of the walkthrough above.