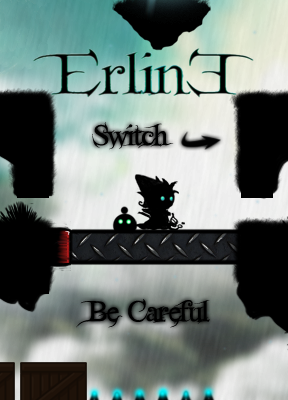 ErlinE, a puzzle platform adventure game from FedeehSevenfold, features a bewitching ingénue trying to save her home, Aurla. With the help of her ever present companion, who could easily be mistaken for a bulldozer in disguise with all the pushing and shoving he provides, she must brave a terrain filled with spikes and lasers to save her world from evil that has seeped through portals that were supposed to keep that stuff gone for good. In this besieged magical world waiting for a hero, it's up to you to throw caution to the wind and charge headfirst into danger. After all, who else but you could possibly save such a gorgeous landscape that has no other champions to defend it?

Use the [WASD] keys to move through the ethereal landscape and reach the portals that will transport you to your next challenging level. Spikes and lasers are your greatest foe, though in later levels you'll have to contend with globular creeps and a solid star dropped from the same spot as the laser beams. You can switch between your hero and her companion by pressing the [E] key. Left clicking the mouse button will release a little ball of magic that not only can push far off buttons, but has the strength to shove boxes that will be oh so needed as you go through the levels. Don't worry about holding the mouse down when you throw out the magic ball, and make use of the benefit that it lasts for several seconds and has a fair range it can travel. There are 20 levels of increasing difficulty and creativity to tackle. If you find yourself stuck there is a refresh button to reset the level. However, be careful with the home button. If you want to go back to relive an earlier level all later level progression disappears beyond the level you select and you will have to go through each level again(!)

ErlinE is a charming break from the usual zombies or escape the room type set ups. Navigating through the game is, for the most part, very straight forward and it's easy to determine how best to get to the portal at the end of the level. One of the few drawbacks is the finicky play of the little helper. While the speed and height of jumps come in handy, he has a strange floating mechanic that if you fail a jump you appear stuck and you have to let go of the controls until you can attempt the next leap frog mission. Apart from that, the game successfully delivers a story line that resonates with the adventurer in all of us, an enjoyable soundtrack, and stunning terrains that might make you look around your room thinking "Hmmm, where's that charcoal pencil?" If breathtaking imagery, well crafted levels, and a sprinkle of magic are your type of thing then ErlinE is exactly what you've been needing to make your day that much better.