We've met ErlinE before, but now she's got da magics in Frozennnn's new puzzle platform game ErlinE: The Magic Orbs. Our shadowy little heroine finds herself lost in a dark forest and tasked with gathering the mystical orbs that have been scattered around to help mankind return to an era of peace and happiness... and, y'know, deal with that whole unspeakable evil thing that's reared its head since the orbs have been scattered. In each level, us the [arrow] keys to move, jump, and duck, and [X] to pick up and throw items. You need to find the titular glowy ball of magic and deliver it to the portal at the end of each stage to proceed, but avoid hazards like sawblades and those glowing pits (those ain't fairy lights), since a single hit will kick you back to the start of the level. 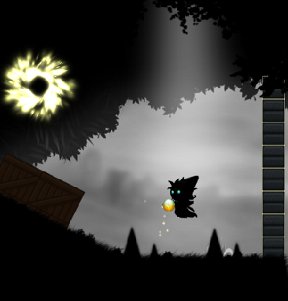 There's a lot to like about ErlinE: The Magic Orbs, but the most obvious might just be how gosh darn purdy it is even with its simplistic style, from its lovely painted environment to its striking shadowed characters and enemies. I want to lay in a field of flowers playing it while soft jazz plays and I'm shot in a soft focus lens. The problem lies in that you'll probably wish it was more strictly a puzzle game than an action one, since the not immediately clear hitbox of ErlinE herself and the zippy movement can make precise platforming under pressure a pain. Yeah, okay, I could leap from disappearing platform to disappearing platform while saw blades whirl at my face, but I'd rather do some more puzzle-y stuff with the way picking up or dropping the orb can change your environment. It also seems like the portal you're meant to chunk yon orb into might be a bit more forgiving if it had some sort of gravitational pull, since aiming can get annoying when a miss might force you to restart a level based on where the orb lands. All of this means ErlinE: The Magic Orbs is a game more for fast-paced fiddly players than not, which is a shame since with a little more forgiveness its snappy, simple gameplay would be a lot more enjoyable to a wider pool of people.

Slippery platforming and generic level design, overall a bland experience. Additionally, while the art style is nice enough, it seems sort of slapped on top, rather than convincingly integrated with the game mechanics.

Not to mention buggy. There were a few times when I would suddenly die right after restarting and the level wouldn't reset. And a few times I died while holding an orb and still be holding it when the level restarted

Nice diversion! The artwork is nice, atmosphere is nice, but the levels are REALLY simple, even the more tricky ones. This makes the overall experience too short... but still, nice looking game!

And oh yeah, I agree with augurar, the platforming is not too good. I always find it annoying when platforms are indeed slippery and the jump does not work on the timing you expect it to work.