Ten monstrous bosses are sequentially set to destroy the Earth, and humanity's only hope is our hero, Blast, who must go it alone against the onslaught of bugs, tanks, cacti, aliens and worse. For some reason. I mean, don't we have the military for this kind of thing, too? I know the JSDF doesn't have the greatest record against Godzilla, but you have to figure they could at least help with bosses one through three or something. Whatever. Epic Boss Fighter is an epic action shooter by Entertainment Forge that'll have you rushing in a manner quite boss indeed. With either [WASD], [arrow] keys, or the mouse, move your constantly firing hero around the landscape, blasting each boss while dodging their attacks. Watch out for their glowing magical weak spot! Collect coins from successful hits and spend between attempts on upgrades. Some, like the force field or the area bomb, much be activated with [spacebar] or by clicking, and need to recharge between uses. Beat bosses quickly enough and they'll be considered KO'd, and won't show up in the next replay. Clear all 10 bosses, and the earth is saved... for now. 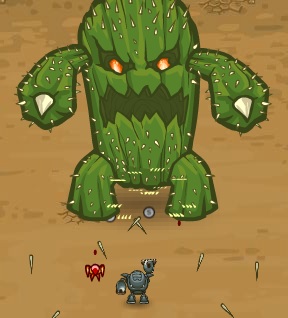 The best part of Epic Boss Fighter is its variety. The 10 bosses all have creative designs, distinguish themselves with difference gimmicks and manners of attack, and keeps pace with the upgrades you purchase for a nice learning curve. If there's one thing to complain about, it's that the bullets could stand to be a little more hellacious. With enough upgrades, some levels can end up being reduced to staying in one place, only slightly dodging left and right every so often. A ranking system like in Bullet Heaven would have gone a long way towards improving replay value, though the unlockable survival modes are a nice touch. Despite its repetition, Epic Boss Fighter has a ton of charm in its battles, and the open ending makes one hope for a sequel that will take the concept further. To like, 11 bosses, even.

Damage upgrades that you can actually notice (no weird percentage points or anything) are a good thing. They help you feel that the grinding is actually going towards progress, instead of the vague promise that one day, you'll get somewhere.

Unfortunately, it also means that without a wider spectrum or difficulty curve, the game is really short lived. And the survival mode removes the idea of progression and is just about maxing out and letting the skill based mechanics take over.

While giving simple arcade pleasures their space is important, the game had been designed as a good framework for an upgrade-focused system. No needless fodder to slog through: just progressively stronger bosses and their minion dudes. Scrape by a boss just to meet his angry older brother. Take away that meta-narrative, and the game only becomes a barely competent bullet-hell.

This is kind of a silly thing to get upset about, but once I've maxed out all the upgrades and no longer have anything to spend cash on, it's kind of awkward to see the number climbing higher and higher after each failed run and nothing to use it on. I had this problem with Bullet Heaven as well.