Entertainment Forge's Epic Boss Fighter was all about big bosses, big arcade action, and relentless bullet-h-e-double-hockeysticks gameplay, liberally sprinkled with upgrades to boot. Epic Boss Fighter 2 continues that tradition and dials it up a notch as you are called upon yet again to defend the planet from a whopping twenty huge monsters, and the kicker? You need to defeat them all in one go... die, and you'll need to start over from a certain spot depending on how many bosses you've beaten, though you can spend the cash you earned from landing successful shots on new equipment that'll boost your stats, as well as handy-dandy droids that can fight alongside you. You can play with either the keyboard or the mouse, but you'll automatically fire, and different equipment will come will various special abilities or attacks you can activate to give you an edge. As you progress through the game, more items will become available in the shop, and you can unlock more slots for equipment as well. The question remains, however... epic being one of those words that's been bandied about so often in pop culture it may have lost its impact, is Epic Boss Fighter 2 really double the epicness of its epic predecessor?... well... yes!... sorta! 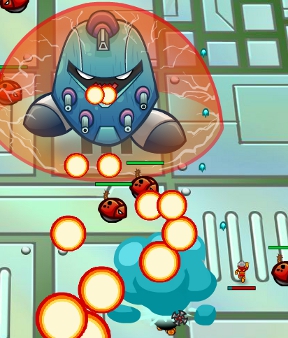 There's no denying that Epic Boss Fighter 2 is meaner than the original, and not just due to the beefier number of baddies than before. While some of the bosses are rather bland and simple, mostly consisting of your typical "fills screen with bullets" variety, little touches to others make them more fun, like a spider boss that will heal itself with flies unless you blast them, or a stage where you can pick up allies who will temporarily help you fight. Bosses don't really have patterns to their movements and attacks, making the whole experience a lot more chaotic and frantic than other games in the genre, and making the gameplay all the more challenging the farther you go. The game still feels a little grindy when it comes to affording the expensive upgrades, which makes the lack of a coin magnet ability like the first game all the more frustrating. Despite this, and the meh bosses you'll have to slog your way through before things really get creative, Epic Boss Fighter 2 is still a lot of fun, and a clearly passionate attempt to create a sequel that neither rests on the laurels of the first game without changing enough, or changing so much that it loses exactly what made the first game so much fun. Though the grind and repetition may put off some, Epic Boss Fighter wins points for its inventive enemy design and challenging arcade gameplay, making it a solid, fast-paced shooter that won't eat up your quarters. ... do you kids still play with quarters? God, I'm so old now.

I got a little frustrated with the coin magnet issue, and with both the expense and sheer number of items. You could have had both build diversity and sense of progression by offering far fewer items, and allowing those items to be upgraded.

My biggest problem, though, was with the awards. In my experience, a lot of them aren't obtainable without being able to select which boss you start at.

@Mantus
In the options there is an option to always start at the first boss, which you can toggle on and off mid-game. This should let you get those awards.

Insane is seriously ridiculous. I can't get past level 3.

I did eventually beat all the levels on insane. God I need a life.

I'm stuck on insane level 3 as well. Even at lowest fx to reduce any lag, I can't even get the spider to half life. :-P

3,671 Views
0 Comments
chrpa— Jayisgames needs your help to continue providing quality content. Click for details Welcome to the Roundup 45 with three games! As mentioned in the previous roundups, only odd-numbered episodes are featured since even-numbered are for Robin Vencel's patrons. More...  ...