Empress of the Deep:
The Darkest Secret

You'd think if someone wanted you to save all of humanity they'd be a little bit more forthcoming with information. Juicy items like who you are, why humanity is in danger, and who's trying to kill you might come in handy on your quest! But, then you wouldn't have the kind of excitement of exploration and mystery that you get in the Myst-like adventure game Empress of the Deep: The Darkest Secret, just released for both Windows and Mac. 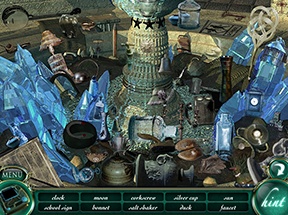 Empress of the Deep is completely mouse-controlled and features a wide variety of puzzles to solve. In fact, other than the hidden object scenes, none of the puzzles seem to repeat, and a few are really inventive. For example: a puzzle involving setting chess queens on a board without any of them killing each other. Some old favorites like the Towers of Hanoi make an appearance, but because they only appear once, it's like seeing a familiar friend in an unfamiliar place, not like some games where one more image scramble puzzle will make you toss your computer out the window.

Empress of the Deep continues the trend of games that are adventures at heart but include hidden object scenes. This seems to be a trend that aims at bringing in more casual players to the adventure market, enticing us with something familiar and then introducing serious adventure elements once we're hooked. While it's billed as a hybrid game, Empress of the Deep is much more adventure-like than anything, squeezing some of its complexity off in favor of a few casual-friendly mini-games and design elements. 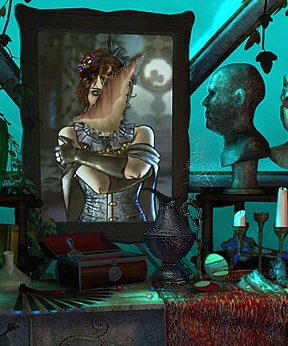 Analysis: Calling Empress of the Deep "Myst-like" is high praise indeed, and it's hard to believe a casual game could earn that kind of a compliment. It doesn't match Myst in terms of gameplay length or sheer depth, but it certainly evokes similar emotions and carries with it the awe-inspiring sense of being in a gorgeously rendered realistic-yet-unearthly place. A world under the ocean, in this case.

The plot manages to be trite yet completely compelling at the same time. I had identified the "ending plot twist" from the moment its agent first appeared, yet the game kept pulling me along through sheer creepiness and subtlety. Towards the end of the game the voice acting and script get a bit histrionic, and my character made one statement that made me say "Oh, come on," to the screen, but I'm still overall impressed with the storytelling. The game does end with "to be continued," but it's not a cliffhanger ending. The immediate danger is resolved, and it's more that there's a new world to explore, and I for one can't wait to explore it.

Empress of the Deep's hidden object scenes suffer from the objects being too well hidden. In some cases, not only are the scenes heavily monochromatic, but the objects being looked for are semi-transparent! I'm a veteran hidden object player, and I ended up using a couple of hints per round. Thankfully, the hint meter is very quick to refill, and there doesn't appear to be any penalty for random clicking either.

Empress of the Deep: The Darkest Secret sets its goals high and creates a strong environment filled with good puzzles and unique mini-games. What it lacks in storytelling and depth it more than makes up for with atmosphere and gameplay.

"and a few are really inventive. For example: a puzzle involving setting chess queens on a board without any of them killing each other"

I'm not certain, but it this supposed to be some kind of sarcasm? The 8 queens is about as far from being totally inventive as is possible. And then in the next sentence, you say it has Towers of Hanoi, but only once so that's ok?

Am I the only one who absolutely HATES the towers? It isn't even really a puzzle, you just get the basic scheme and repeat it mindlessly for 2 to the N moves. Please, for the love of games, kill it. It's the laziest excuse for a time waster and it's in every single game.

I loved this game. Nothing says "buy me" like tons of crazy whimsical scenery and a little brats' laughter.
But I gotta agree about the mini-games though. It's like, "Okay let's put everything on hold while we travel back to planet Earth and figure out once again how to place 8 queens on a chessboard". They're too reality driven. I could list about 100 mini-games that have been done to death in HO games.

Anyway, I still liked this game a lot. Reminds me of Sirrus and Achenar.

@Kallisti: It's possible that joye has never played The 7th Guest (which, in early 1994, was the first video game where I saw the 8 queens problem.) It's also possible that she isn't into recreational mathematics or algorithm design.

I have to agree, citing the eight queens puzzle and the Tower of Hanoi in a review that calls the puzzles inventive seems a bit disingenuous.

The eight queens puzzle was first posed in 1848 by Max Bezzel, and the solution was published two years later by Franz Nauk. The Tower of Hanoi was first offered by mathematician Edouard Lucas to solve a puzzle described in an ancient Asian legend. The point here being, puzzles that have been around for the better part of two centuries are no longer inventive. I'd much rather hear about the puzzles I can't just look up the answer for on Wikipedia.

Wow. I hadn't tried one of this type of game yet, and I love it.

Any similarly creepy Myst-like games you would suggest? I am especially interested in demos from Big Fish Games and free online games.

I don't understand the whining about "old" puzzles. There is no such thing as a "new" puzzle. Sure there are new twists and mixes but almost everything we see today is a re-do of existing ideas.

Having said that...
I'll only give this game a "Fairly Decent" rating. It was entertaining enough to play (despite occasionally overwhelming my poor old computer) but there were too many flaws yanking me out of the gameplay and irritating me in general.

Why oh WHY do I have to click the back button a hundred times to go to a different area? They already made a map; just make the stinking thing interactive so I can move instantly to a new location.

Why do I have to listen to all the inane dialog in toto? Let me click on to the next line pleeeease? This is especially annoying at doors or areas where she tells me "you can't go here yet" and has to list the reason.

The hidden object games were either insipidly easy or insanely difficult. Several of them I solved entirely just by clicking things that didn't fit the picture - not once even glancing at the objects list. Another one had items so faded into the background I could barely see them even after the hint showed me where to look.

While the graphics were obviously a ripoff of the Myst idea they were a good ripoff so it worked for me.

I appreciated the "Area Cleared!" stars keeping me from wasting time looking around screens for things not there.

The storyline was slightly hokey and way too linear - I knew who the baddie was right away but I had to do their bidding nonetheless to advance the game. But this is just a simple game so that's excusable I suppose.

Overall I'd say yeah, it's worth the seven bucks. I wouldn't pay any more than that though.

FWIW, since a lot of these comments appear to be directed at me, the queens puzzle is uncommon in casual puzzle games now. I play a lot of them, and this was the first time I came across it. The Towers of Hanoi on the other hand is in pretty much every puzzle game (it's in Eden's Quest more than once, which I just reviewed). I don't understand your criticism for my mentioning the Towers of Hanoi when clearly in the review I mentioned it to show that not all the puzzles are original, but that at least puzzles don't repeat.

The reason I used the queens puzzle as an example is that it's easy to describe in one short phrase. Inventory puzzles and such cannot easily be described, at least without spoiling them.

I just got around to playing this one. I thought the navigation was a bit annoying and would have liked to be able to jump past completed areas (but as said above, at least I knew the area was complete).

Mostly I hated the forced hand-holding. For example, with the "slot-machine" puzzle I had found clues for two of the symbols, so I trial-and-errored for the third. Tried all the combos with no luck. Found the third clue. Tried the correct combo (which I had already tried) and with no success. Only after I looked at the clues in the book did the puzzle let me solve it.

I appreciate when games take notes for me, but don't force me to use them. My memory isn't that bad (yet).

I need help with this game. I'm stuck at 8 orbs. I'm missing a clue or something. can someone please help me??