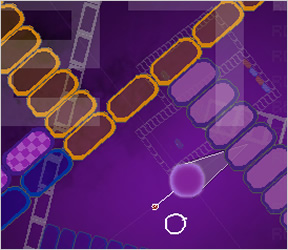 John Cooney (jmtb02) is back again(!) Less than a month after giving the world Grid 16, he brings us Elements for Armor Games, a high-tech cross between Breakout and his own Ball Revamped series.

From the very start, you will be pondering the limits of the human eye and brain as you attempt to make sense of the dizzying landscape that is Elements. Looking through the current level, you can see the next one beneath it, and if you peer into the depths of the background, you can even make out the level after that. This soon becomes important as you reach levels with multiple paths down and are forced to choose which one you want to take. Choose wisely, or waste time taking the long way around.

The ball can destroy bricks of its own color as you make your way to the green "go down" blocks to get to the next level. Hit special bricks to change the ball's color so that you can clear the path, but beware of the purple "go up" blocks, they'll send you back up a level, costing you precious time.

As you'd expect from jmtb02, there are a few twists. The most obvious one is the way you control the game, by clicking the mouse to freeze the action and rotate the board. Use your rotations carefully; you're not limited in how many you have, but you'll have to wait after each usage for it to recharge. As you get deeper, you'll pick up scaling and panning as well, but either will break if you hit a brick.

Analysis: With its riot of color and objects, Elements can be a bit hard on the eyes, but if you can look past that, you will be rewarded with a beautiful game. Each color of ball brings its own soundtrack and background, and while the puzzles won't leave you grasping for pen and paper, you may find yourself getting lost as you try to remember where you needed to go next.

The 25 levels of Elements are short, but satisfying, and the high score board should keep competitive types replaying for quite a while as they try to shave just a few more seconds off their time. Even if that idea doesn't interest you, the first trip down is well worth the effort, because Elements is yet another solid game from jmtb02.

actually, playing this like golf seems to be the obvious thing to do.

This is *sooooooo* aggravating...

... but I had to finish it. :P The control scheme is a little annoying; even with all bars at full it would sometimes not let me hold the ball and redirect it. I don't know why.

I really like how you can see down to other levels, though, and the change in music and scenery style when you change ball colors is also a really artistic and clever touch.

That was pretty neat.

It does remind me of Line Golfer and that one game in the previous game design competition that was like pinball + exploration.

I like the aesthetic touches a lot, especially how each color had it's own music style and sound when you hit a block.

I didn't use the scale and pan tools at all except an initial time to see how they work.

I'm stuck on levels 22-24. I'm dark blue, and can't find a block that I can either break or change the colour of.

I tried the pan / scale options too. But they didn't seem to do anything..?

I got to about level 18, and I got stuck inside two blocks!

I'm not sure I like this. There seems to be no challenge, except in one's effort trying not to barf one's breakfast all over the keyboard. Perhaps the game gets more engaging afterwards, but after the first few levels I see no incentive to go further..

I love jmtb02's games but this one just doesn't do it for me.

At first it was just irritatingly swimmy (though interesting). I remember thinking, oh sure, people get dizzy, har har.

I thought I was feeling just fine, and then I threw up a little.

I did manage to finish the game, but unlike most of his work it was a little plodding and unsatisfying. Perhaps that feeling is magnified by the lingering nausea. If you're not a breakout/jmtb super-fan, I'd just take a pass on this one. It'll be better the next time he does it.

i played till level 5 and got glitches between two blocks of a different color and quit.

Major problem:
I couldn't really figure out which direction the ball was going to go once I rotated the level. I would rotate the board and think I lined things up properly, and then the ball would go off the wrong way. Surely the ball should continue traveling in the same direction when you've finished rotating the board?
This orientation problem eventually created the dreaded "I really can't be bothered with this" effect.
Too bad.

Found a glitch. I somehow got caught inside the wall on level 24(almost done, grrr), and bounced around for a bit until I shot out of the edge of the level. I think it came about in an attempt to use the pan function(which I still can't seem to get to actually DO anything).

I was dissapointed when two games in a row my ball hit two colored blocks that were at an angle and somehow went inside the colored block (they didn't pop since I was another color.)
Too bad, because the concept seemed pretty good. The angle control was fine but I didn't find any use for the zoom or pan. The levels just didn't seem to add up to anything.
Great concept - needs some debugging and polish.

and I got stuck in two blocks. i was light blue and the blocks were dark blue and the level 2 below was the shape of a 0 (zero)

It took me a bit to figure this out, but the cone/triangle off of the ball points in the direction it's heading- which is VERY counter-intuitive for me.

Either the game was buggy, or I didn't get all of the game mechanics. It was too frustrating and I felt like I hadn't changed levels EVER even though I had, since they don't stay still enough to look much different. I played a few levels but it wasn't entertaining so much as work, unfortunately, so I gave up

To use pan and scale, you just hold shift or space and then click and drag. I just zoomed out as soon as I got scale, then forgot about it.
This game was rather buggy, but apart from that it was good, the only downside being that I got a really bad headache. I played it last night, and I still have the headache now at 5pm.

Okay, I had another go at this (Thankyou MadWithMuchHeart for helping me out).

Beautiful as it is, I still find this game a bit buggy.
The response to the mouse clicks for rotating the screen needs a bit of polish. A number of times it let go when I didn't want it to, or wouldn't register that I'd clicked at the right moment (yes, the rotation meter thing was green).
I found the actual rotating to be a bit choppy as well. It really didn't like to do small movements.
Once again, great visuals (if you can stand the vertigo) great sound and great idea. Just needs polish.

i thought this game was an amazing take on breakout, my only gripe is that you don't have a no sound feature.

and the ball was purple when I was aiming it past a single yellow block when it got stuck on the yellow block! It just kept bouncing INSIDE the the yellow block. I tried panning, aiming, etc. and I finally just had to quit game. Other than some major glitches, it's a beautiful game.