Don't you just want to give electricity a hug? It makes our computers run, it helps cook our food, and without it, we'd have to watch TV in the dark! But it will also kill you if you try to hug it, so the next best thing you can do is play with it in Electro Appliances, a neat physics puzzler. Every level contains a gadget or two that needs to be powered, and you're the person for the job. Just make a connection between a power source and the appliance and you're all set. If this sounds familiar to Let it Glow and its sequel, well, that's because it is. But though Electro Appliances offers little new of its own, it does polish up the concept and provide some engaging levels. 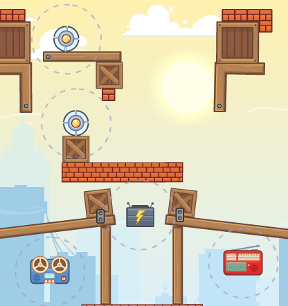 In order to succeed, you'll have to move conductors which will transfer power from the source to the appliance (both stationary). All the elements have fields around them, indicated with dotted lines, and the fields must overlap for the circuit to work. Sometimes you'll also get a movable battery, but it will have to be fully charged before use. The levels are mostly made up of wooden parts, all of which disappear when clicked. Be careful, though, as you can easily remove a part needed to finish a level. The puzzles aren't necessarily arranged by difficulty, but it can be a relief to stumble upon an easy one after a string of head-scratchers. Electro Appliances is certainly well made, from its bright graphics to the peppy music. The mechanics don't disappoint, either; the laws of physics are dutifully obeyed and gravity works as it should. This is certainly a nice addition to the physics puzzle genre, and it will entertain you throughout its thirty-two levels. So put on your gloves and your goggles and get that radio working!

This seems like just a ripoff of the Let it Glow games featured here a few years back:

Like it's exactly the same gameplay without any new ideas of its own.

Hi Regy Rusty, it looks like you're right. We do apologize for the mistake. Not every writer has played every game on the site, and clearly none of us who were familiar with the Let it Glow series saw this game when it was being evaluated to say anything. I'm sure you can understand when we're talking about literally hundreds if not thousands of games a year and different writers! I've amended the original article to reflect this. Thanks for bringing it to our attention.

The button which I thought would mute sound effects(since there are two buttons) doesn't seem to work. :(

Oh it's not your fault. I didn't even remember until I'd played it for a little bit and had a strong feeling of deja vu. Took me a while to even figure out what the other game was I was thinking of.

Are people really asking for more of this style of game? You can only drop so many boxes and roll circles down ramps so many times (like once or twice) before you call it quits... :)