If you've ever seen a luchador movie before, you'll know that luchadores are made of pretty tough stuff. When they're not wowing fans in the arena, they fight off mummies, zombies, and vampire women with nary a thought! But even they are only human, and in killabunnies' El Papel, the mighty luchador El Macho finds himself humbled by the most embarrassing of necessities: A potty break. Specifically, his rival Diablazo has stolen his toilet paper. Nooooooo! Luckily, El Macho is a master of the legendary "Quetzalcoatl" technique: Using only the [WASD] or [arrow] keys, he can stretch his muscular neck out just like a rubber band! He'll quite literally go to ridiculous lengths in search of el papel in this puzzle game, as he snakes his head through the cactus-and-piñata-infested ceiling above his wrestling arena. The only limitation of the Quetzalcoatl technique? He can't cross his neck over itself, so he'll have to be very careful about which parts of the ceiling he coils himself through... El Macho isn't the first game protagonist to be stuck in a situation that can only be solved with Hamiltonian paths, but he's certainly one of the weirdest and most vibrant! Collect colored bats to bash open the matching gates, and pick up stars and tacos for bonuses. The catch is that while you can retract your neck, it means you'll drop most items you picked up in the space you're backtracking from, so you'll need to plan a path that catches everything in one long line. 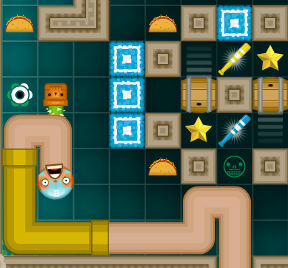 For a game of this type, El Papel doesn't really do anything spectacular different or tread any wholly new ground. It has a few similarities to Nitrome's Silly Sausage, especially in that they're both quite fond of pipes, but El Papel has a more puzzle-y pace than Silly Sausage does. Those puzzles themselves are solid, with a decent number of tricks and gimmicks throughout each stage; there are multiple types of colored switches, dangerous cacti, and barrels that must be pushed out of the way, Sokoban-style. Very few levels are especially difficult, though. Partially, it's because you can back up and change your path at any time, so certain items can be moved or picked up without having to "commit" to stepping on that square. Hitting obstacles will also only send you back to the starting square, and won't reset the level. Those going for a high score will find a little extra challenge in collecting all the stars, which require your final path through each level to pass through them if you want to collect them. But for the most part, the game is smooth sailing. What really makes El Papel enjoyable is its sheer ridiculousness. A stretchy-necked luchador stuck on the toilet is a heck of a starting point, but the game's devs weren't content to have just the premise be insane. The game has clean and professional art design, with wacky and cartoonish animations, and appropriately silly sound effects to go with them. The whole thing is punctuated by several equally-nutty cutscenes, each of which is fully voice acted (in Spanish with English subtitles, of course!), and with delicious amounts of hamminess. El Papel is a thoroughly bizarre yet wholeheartedly loving homage to all the weirdness of lucha libre, with a puzzle game thrown in. Don't worry about unnecessary things like "logic" or "sense," and go with the flow!

Being hit will reset moved boxes, and picked up tacos will STAY picked up when backtracking.
Also, there is a tutorial, which, if you're going for points, counts for total score accumulated.

This is quite possibly the silliest game I've played in some time.

Just the right level of difficulty, too. They could have made this brutally challenging, and I'd probably still have played, but I doubt I'd have had as much fun.

I beat it, checked the levels to make sure I got 3 stars on each, and I had no stars on level 37, and level 38 was still red?

Went directly to level 37, I had not played that level going through the first time, beat it and went on to level 38, which I HAD played. Beat level 38, went back to the level map and everything said 3 stars at that point.

The voice is hilarious!

A nice silly puzzler... but why rating Orange? There's nothing very much upsetting about this one, no blood or gore or heavy swearing or scaries?
Yes, they mention poop, and the neck-stretching would not be suitable for a real human, but otherwise? I mean, that's nothing strange for a game.

A thought occurs to me: why doesn't he just wipe using that magazine he was reading?