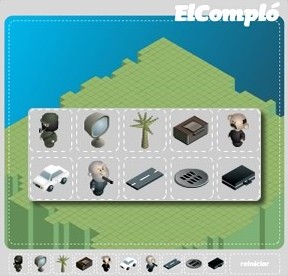 El Complo is a casual puzzle game, similar to the Grow series of games, in which several items are added to the puzzle by clicking on them, one at a time, until complete. The order by which you click on the items determines the outcome, with only one sequence yielding the winning solution. Feedback is given once all items have been added indicating the relative level of completion attained for each.

The game is really an elaborate animated political cartoon in disguise. With thanks to Sebastian and Neop for their explanations in the comments, the game is a satire about recent political situations in Mexico involving an ousted mayor (El Peje), a senator (the guy with the cigar), and a series of incriminating videos including one with a politician and a suitcase full of money. The term "El Complo" is the term that El Peje used to describe the scandal, a complot (conspiracy) against him.

Despite its propaganda, the detailed animations of El Complo contain much of the same charm we are used to seeing with Grow, and thus makes this game a fine addition to the growing list of 'recipe puzzles'.

Cheers to Oliviayang and Gabriel for suggesting the game. =)

I never thought I would say it, but that made even *less* sense than grow. Wild, wacky stuff!

I never thought I would say it, but that made even *less* sense than grow. Wild, wacky stuff!

I love these types of games.

Solution if you need it:

Nice game! Finished it after about 10 tries but things don't seem to make logical sense... I still love these kinds of games though.

Cool game... Figured it out in about 30 minutes.
Here's the solution if anyone gets stuck...

i cant do it but ill keep on trying :D

Every ones about to ask for a walkthrough...so here is one!

I really enjoyed this game for the first 20 min I played it. However, I cannot complete it and now I'm frustrated. I'm wondering whether there is a hint in the into that I'm missing seeing as how its in Spanish? Best I can manage is:

The ninja/guerilla will use the magnet to pull the car

Good game! short thought. this is the first time i was able to finish one of these games without cheats, GO ME! Keep up the good work Jay, we need some new point and click games!

Also, I played this game a while ago, there are several different solutions, in case anyone is interested, here's one:

palm tree, Salinas(the bald guy), street, briefcase, the brown thing(I'm not sure what it is), sewer, car, TV, Castro (the guy with the big beard), Marcos(the guy in green)

Darn... the closest I've gotten so far is all but 4 of them maxed.

Does anyone have a translation for the info screen? I recognized Comandante Marco, and Fidel Castro. I am curious about the message this game is alluding to.

OMG i love these games, even though i suck at them. thanks jay~

wow, it's much more interesting to learn there's a political message behind this game (sort of like the mcdonalds video game, though that one is rather self-evident). Please, I beg somebody to provide commentary!

Wow, that took me a while, but finally I made it without cheating. Though I must say it didn't make much sense to me, even when its done. Can anyone make out the message or meaning of this game?

whatever it may be, it was a lot of fun to play.

The events from the game are a parody to a recent scandal between "el peje" (governor of mexico city) not shown in the game (the sewer are his offices), senator Ceballos (guy with cigar) and his release of a series of incriminating videos, including the one with a known politician named "Bejarano) and a bunch of money (the suitcase). The bald guy is ex-president Carlos Salinas (a.k.a. he-who-must-not-be-named) a shadowy figure in mexican politics whose involvement with the scandal is not fully known. The guy with hat is sub-comandant "Marcos" guerrilla fighter, and the guy in plane in the end is president Fox. There you have it, the significance of "El complo'" (that's the way "el peje" described the scandal, a complot against him).

For all those of you who want an explanation I'll try to explain most things in the game.

First of all, the message at the beginning simply says that the objective of the game is to catch the 'peje' who's been hiding. First I should probably explain who the 'peje' is. His real name is Andres Manuel Lopez Obrador, he used to be the governor of Mexico City, but now he's working on his campaign to become president in 2006 elections in Mexico. They call him 'peje' because of a time he was talking about 'pejelagartos' which a certain type of fish.

Now, on to the name of the game. The people in the political positions in Mexico (such as governors, senators, the president, etc) have something called the 'fuero' which prevents them from having a trial. So if they are accused of a crime, first the senate must approve for 'fuero' to be removed and then they can start a trial. While he was still governor, he was accused of a crime, so the process of taking away his 'fuero' was started. He obviously stated that he was innocent and that it was all a ploy to stop him from being able to compete in the 2006 elections (if his 'fuero' was removed a trial would start, and while involved in the trial he would not be allowed to register as a candidate). Therefore, he referred to this a "El complot" (Spanish for The Ploy). But because of his accent it sounds more like "El compló" instead of 'complot'.
As for the rest of the game, I'll only mention briefly what each item represents.

Salinas (the bald guy) - Mexican ex-president, he stole a lot of money from the government and led the country to terrible devaluation of the peso. He is not welcome in Mexico, he was kicked out shortly after he stopped being president.
Fidel Castro - As you probably know, he's the Cuban president.
Sub Comandante Marcos (the guy in green) - He is part of a political movement in Chiapas which is very complex, so I'm not going to get into it.
Car - The 'peje' is famous for being "humble" he drives a white Tsuru (I think in the US, it's called a Sentra, but the Tsuru is not he latest model, it's an older model).
Road - One of the things the 'peje' while he was governor is to build a second floor to one of the main roads in Mexico City. He spent a lot of money in this, and we now have a big debt because of it. In Mexico they make a lot of jokes about second floors to mock him.

Finally, Salinas and Castro kiss because Salinas supports Cuba. The 'peje' is in his car, falls down into the water, transforms into a 'pejelagarto' and is caught by Salinas. I'm not sure why Salinas is fishing for the 'peje' though.

Thanks for the explanation. Just this morning I had a presentation in one of my classes about the Zapatistas. I recognized Marcos and his pipe right away.

Not to be offensive, but I secretly suspect that Marcos is totally hot!

Thanks, Sebastian and Neop, for explaining the politics. That made it both more fun and more interesting. :)

""Cheers to Gabriel for suggesting the game. =)""

I thought I'm the one that submit the game.
=(

Aye, you did in fact suggest the game before Gabriel did, Oliviayang. Please accept my apology for missing that. I've updated the entry accordingly. =)

How do people go about solving these things? Given that almost every element depends on another for its progression, any attempt I make to use logic devolves rapidly into a brute-force approach, which isn't elegant.

That was the weirdest game ive ever played! Its alot easyer than GROW Though. Thumbs up!

Interesting game, it was fun to see all the animation, except the fishing...thanks for the walkthrough jonmay! :D

hey jay ur game an't workin can u find out way

It took some time, but I located the game. It had moved. Links updated. Cheers!

I really like the game I finished it in 5 trials!!

Links are fixed. Thanks for the alert. :)

the translation of the instructions are: Peje walks hidden that way, and you must fish it.
Each that you select one of the 10 icons that appear down, something happens. The objective is to choose these icons in a fragmentary order, and to cause that an exact combination of events happens, so that you can finally catch to peje and to make reality I sound of which another one.

neop said there were several solutions, but everyone seems to have been getting the same.. Are there more?

Why aren't there more clever games with political satire? It's such a good way to express stuff like this. I suppose I'd find this hilarious if I had a better understanding of mexican politics (we don't get very much everyday info on that in Europe...)