Egyptian Ball from EleFun Games is a brick-busting Breakout title centered around one gameplay element: destruction. It doesn't try to woo you with a fancy story or strategic power-ups, instead opting for ancient Egyptian temples and spears, hammers and ballistas to speed up the destruction. Throw all that carnage into a pleasingly crisp presentation and, well, you'll have a lot more fun than you thought you'd have with a simple Breakout game. 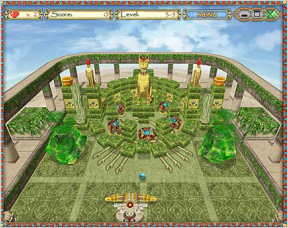 The idea behind Egyptian Ball is that you are taking part in a brutal war of the ancient gods. Using the Egyptian Ball (which, you know, is the ball) and what I can only assume is called the Egyptian Paddle, unleash the destruction and keep bouncing the ball back into play to watch the ancient temples crumble into dust, all in the name of a new Pharaoh. Power-ups are dropped from time to time, and you must grab them before they disappear off the bottom of the screen. Just don't let the ball drift beyond the paddle!

The usual battery of Breakout-style weapons are at your disposal, including a curved paddle for controlling which direction the ball bounces, ropes that prevent you from losing the ball, and power-ups that change the number and speed of the balls or size of the paddle. You'll also come across the really fun items that give you arrows or spears to blast at the ancient monuments. The hammer is especially entertaining, as it allows you to point and click at any tile on the screen to smash bricks with your mouse. Take that, twirling block of sandstone!

Part of the excitement in any Breakout game is getting the ball stuck in one of those sealed-off areas, causing it to bounce madly back and forth, clearing dozens of blocks while you sit on your laurels. Egyptian Ball is no different, and many times you'll grab a ball-multiplying power-up and watch half the scene fall to your brick-busting skills (read: blind luck). 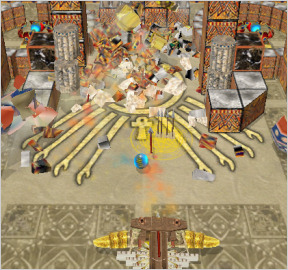 Analysis: I wasn't expecting much out of Egyptian Ball, and it certainly doesn't expand the genre or claim to be the end-all of brick busting games (Fizzball says hi). But what it does manage to do is create a strangely fun game of destruction. The ball is released, you watch it break seemingly solid pieces of stone, then you bounce it back to watch it happen again. Chain reaction events are a fairly common occurrence, giving you plenty of opportunity to kick back and enjoy the razing scenery. Egyptian Ball won't tax your brain and is a great way to unwind at the end of a long day.

The physics are well-implemented in Egyptian Ball, though most of the "bricks" you break feel as if they were made of saltine crackers. There's no visceral quality to anything you smash, and even though sending tall sarcophagi crumbling to the ground is fun, adding a little oomph would have heightened the experience even more. The visuals are crisp, clear and detailed, and despite their rather small appearance still manage to create lively scenery.

Not a brain-teaser by far, Egyptian ball is simple brick busting implemented extremely well. Ditch the bells and whistles, the half-hearted attempts at innovation, and just smash some stuff!

I actually got this for free while Game Giveaway of the Day was still booming. It's a great game.

I grabbed it at GGAOTD too, was much fun. I miss the giveaways :(

After my post, I went and looked at the Giveaway site again and it looks like they are back up and running with a new game.

I don't really get the point of paying for a Breakout clone. Sure, it's got decent graphics, but the gameplay is the same as (or in some cases inferior to) a ton of the free options out there.

But ggotd is only running on weekends, so it feels like there aren't any ;)