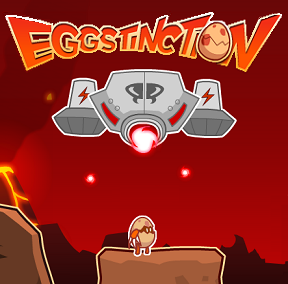 A proto-dinosaur faces a number of threats, even before it has hatch. Volcanic eruptions... meteor strikes... a lack of Don Bluth involvement. But the most dangerous has to be that brand of hungry aliens that would just love to poach you with a blast right in the albumen. And if that happens, brother, it'll be Eggstinction. A fast-paced action shooter by Michael Chen, Eggstinction shows that dinosaurs put up quite a fight during that K-T event. It may be a dissimile to say that Eggstinction is a lot like Heli Attack except it stars a egg that fights UFOs and there aren't any Heli's. But uh... yeah. It's a lot Heli Attack. It has the same combination of quality visuals, hardcore run-and-gun survival gameplay, and a comically-diverse selection of weapons. Overall, the whole thing is kind of silly, but the very second you fill your rage meter and transform into a giant T-Rex that shoots beams when he roars, you get the sense that this is the kind of thing the flash gaming was created for. So get out there and kick some Jurassic!

The game seems to be a little buggy. Right in the first level, after turning to a dinosaur I suddenly went straight through the floor and fell into the idle void: the character remained on the screen surrounded by black nothingness forever and ever. Or rather, until I closed the game and went to do something else.

Reminds me of Heli attack.Actually it's a straight up clone.
- needs a double jump
- after reverting from dinosaur, you should be holding the weapon you had, not your useless claws
- the maps need to be improved, there's really only two safe points

The claws actually do surprising damage when you do the 3 hit combo on the robots.

This is a good game, but I think there are a few flaws. You can't get your health back easily enough. The Leechgun provides more health than the health power up, but it is up to luck if you get either.
Also anytime you get a weapon, even if you have it, it restocks the ammo. This means you can't pick up more than the max ammo count. It would have been nice to know when I am in Dino mode that the second Leechgun(1 shot) won't count.
Two tips are some weapons will fire through the overhang(like the boomerang and the flamer). Use this to your advantage.
You can also combine weapons such greasing your enemies and then using the flamer to do massive damage.