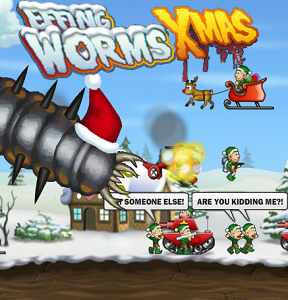 Santa may be delayed this year in dropping off presents for everyone. The North Pole is being attacked by a giant worm that is determined to destroy Mr. Claus and his holly jolly Christmas helpers. Get into the anti-holiday spirit with Effing Games arcade action game Effing Worms Xmas. Using your [WASD] or [arrow] keys you will guide your hungry worm under Santa's snow covered workshop with the occasional leap above the ground to munch on a delicious elf or reindeer, maybe even a bunny. Your health meter is at the bottom and you will need to keep eating to stay alive. Your goal for each level is located above the health bar on the left side and after each level you will be given two upgrades to choose from to bolster the defenses of your beast.

It's safe to say that Effing Worms isn't the type of game that will require intense focus and well thought out attack maneuvers. The game dynamics aren't drastically different from its predecessor but who needs innovation when you have havoc to wreak? There's a possibility of your worm getting too big and obscuring your view, but this can be easily avoided by devouring just enough to complete each level. What's best about this game is that it's a wonderful counter to all the holiday cheer you can expect to be shoved down your throat. Here's your chance to get payback on Santa for never bringing you that Red Ryder BB gun because you "might shoot your eye out". LIES!