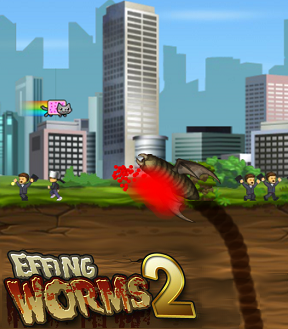 The Effing Worms are back? Quick! Call the House Atreides! Call Beetlejuice! Call Kevin Bacon! Wait... We're the ones controlling them? Never mind then. Lets wreak some havoc! Effing Worms 2, an arcade action game developed by Effing Games, has the player guiding the actions of their very own huge voracious annelid. And man, those puny humans have never looked so tasty.

Use [WASD] or [arrow] keys to steer your worm left and right, as well as to speed up or slow down. Generally, gameplay will consist of choosing the right time and place to surface and chow down. Though gravity affects you when not underground, building momentum and using your wings to "swoop" up and down can keep you aloft for longer. At the bottom of the screen is your hunger/health meter. Take too much damage or fail to eat enough to offset your hunger pains, and it's game over. After eating a certain number of enemies, an upgrade will be unlocked, giving you the choice of two modifications to your collossal beasts. The further you go in the game, there'll be larger numbers of enemies with better firepower, but you can always stay below and much on a few lizards for health when needed. Despite its subterranean star, Effing Worms 2 can't really be called a particularly deep game, but it has that visceral kind of DESTROY EVERYTHING! fun that will never stop being addictive. There's no real goal beyond eating, growing, and upgrading, but adding those little bits of customization to your creature is strangely satisfying. At the very least, Effing Worms 2 should help players de-stress as they munch their way through a coffee break.

A complete sidebar... do Effing Games have nothing to do with Effing Hail? Different teams, yeah?