Owners of iOS devices have been enjoying Mobigame's isometric arcade/puzzle game EDGE for over two years now. The game survived legal battles and multiple removals from the iTunes App Store to win a number of awards for mobile gaming excellence. Now, Mac and PC can come to the party thanks to the porting prowess of Two Tribes! EDGE has arrived on Steam, carrying with it all the content of the mobile release with updated visuals and a new interface. 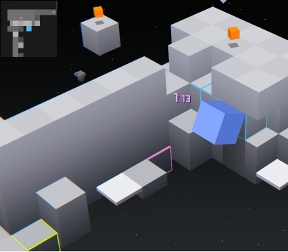 In EDGE, you control a cube that moves along an isometric grid by rolling side over side. Clip clop through each level collecting small cubes and dealing with moving platforms that can either help you to higher ground or shove you into the big empty void below. In addition to being surprisingly adept at rolling (you know, for a cube and all), our little buddy can also cling to the sides of walls for a few moments and even shrink to miniature size, allowing you to scale up walls and move through small spaces.

The first few levels in EDGE let you get used to the gameplay with some basic puzzles that are little more than reflex tests. Soon, though, stages get increasingly complex and feature puzzles braided into puzzles, forcing you to actually think before you start rolling. The action also gets more intense with moving blocks, launchers, switches and other elements that can toy with your balance and send you careening around the level at dangerous speeds. 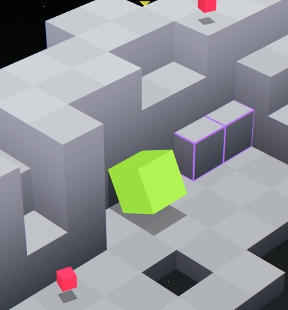 Analysis: EDGE is as challenging as it is beautiful. One of the reasons this title received so many accolades in its mobile form is because it looks stunning, featuring clean visuals that make sparse use of color, creating a futuristic sort of world where geometry is king. The action-oriented puzzles are also smartly constructed to challenge you throughout the game's 50 or so levels.

Level design is crucial in a game like this, and EDGE's designers got things just about perfect. Gradually increasing complexity, strange contraptions that do even stranger things with the cube, and stage layouts that are simultaneously challenging to both the reflexes and the critical mind. The emphasis of the game is on getting a high score and then trying to beat it, making old school arcade gamers feel right at home.

Try out EDGE and EDGE Extended for iPhone and iPad!

EDGE does fantastic as a mobile game, but it suffers a bit making the transition to the desktop/laptop world. The controls, for example, are a serious issue. Touch screen navigation is easy and intuitive, while isometric movement with a keyboard is always a hassle, even if you're used to the [up] arrow moving you northeast. The options screen allows a bit of leeway, but in the end, EDGE loses a lot in the translation from being a "touchable" title to sticking a mouse and keyboard between you and the game.

Regardless of the minor controls issue, EDGE looks and sounds even better on the big screen and contains every bit of content found in the original mobile release. It's a clever, engaging, unique sort of game that's an excellent fit for the casual gamer who enjoys a bit of edge-like perfection!

OMG I LOVE THIS GAME. When Two Tribes announced it was going HD and whatnot, I was too thrilled.

Oh, and a recent update allows you to make the Up key NE or NW.

I loved EDGE on the mobile! I never manage to get that EDGE time though.

The controls are rather poor IMHO.

It took me a very long time to get used to the controls. Definitely not as intuitive as a touch screen, but it eventually works. It's no different than any other isometric game, really.