The latest offering from the good folks at binaryzoo is Echoes, a free downloadable game for Windows, and it is a manic shooter—and I do mean manic. Before I get too far into this, here's a quote from the game instructions: "if you may be affected by flashing lights then please set Screen FX to off." The action in this game is fast, furious and very visually active. Binaryzoo's trademark neon graphics combined with the intense backgrounds may have an effect on some. Though, disclaimers aside, as someone who can have the graphics on full—this game is really very cool. 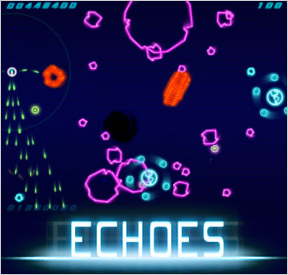 The developers describe the game as being "like Asteroids" and "a bit like Geometry Wars," and Echoes is part these and wholly its own. Starting off slow, you are given an entirely too brief introduction to the game where small glowing outlined "asteroids" slowly creep across the screen. Soon, you'll reach level two, where slightly larger ones are introduced. Then larger, then larger. After that... well, I'll leave that up to you to find out.

Although not evident in the initial running of the game, besides scoring points for shooting, shooting, and more shooting of things, there are medals to win as well, called in-game "trials". These are displayed to you at the end of the game and can be recognized during play by the large "ZOOT" (i.e., Zoo Trials) that flashes about the screen. There are ten of these trials to complete in each of the three difficulty settings and completion of them all will result in 100%.

As of the current download, online scoring is unavailable though, according to binaryzoo: "The online score system will certainly happen. It is already coded and will be added as soon as our new website is finished. However the new site is being written by someone else and it is taking longer than I expected so I can't honestly say when it will be available."

This game is amazing!!!

What a treat. I died quite early on but I can imagine how hectic it could get. It reminds me of luminara alot...

i love this game! the only thing i wish would be if it ran a bit faster on my computer.

that and i have epilepsy.

Sever the ties: There's settings to turn off the epileptic-ness. Check out the graphic options.

For lack of an official high score list... I grabbed 1,980,050 on easy during reviews. Anyone top that yet?

Damn, I really do love this game as I love geometry wars and a few other games alike. These games are short enough, they take you to action fast enough and there really is enough action to keep your fingers busy.

Only thing to complain is controls. I must recheck whether I can control the ship AND direction of shooting with keyboard only. I did not like default controls at all and played it so that I moved the ship with WASD and controlled firing flow with mouse cursor. Sadly it gets pretty hard to stay aware of mouse cursor position in the later levels where the screen is full of action. Of course it would be best if I had some game pad but for now I don't.

I got around 1,600,000 in easy mode. Must try again if I could find better controls. Oh, and I would love if people made these kind of great games using openGL or some other platform independent libraries to make these games available in Linux and other operating systems too. Great game nonetheless!

Jussi: You can indeed control movement and shooting with the keyboard alone. I chose arrow keys (what it calls "cursor")for movement and WASD for aiming.

Great find! Very fun and hectic, and I'm still playing the game for the past 10 hours

I broke 2 million on Easy, haha!

"Well, this game is fun and all, but rather overwhelming after a certain point, and I'm not sure playing it any more will make me able to overcome this issue, so I'll just go ahead and qu-OMG MY EYES! THE GOGGLES, THEY DO NOTHING!"

That all-white quit screen is rather *bad* after a fairly dark menu screen. Only thing I'd really like to see changed about the game. Although it'd be nice to be able to appreciate the game more fully with better abilities....

Wow, cursor meant arrow keys. Ok it was much easier now. Got 2,500,000 in easy mode immediately after changing controls. 2 more zoots to get in easy mode ("100 powerups in a row" and "get to 500k without hits"). What does 100 powerups in a row mean? Is it enough if I get 100 powerups or do they have to be of a same kind? Or does powerup mean only weapon powerup (not to take any explosion or energy fill between)?

This game is very well done, and a whole lot of fun. It's also nice to see a weekend download game that is NOT a 10-70mb demo for a change!

I downloaded this game to my School Laptop. At school while I play it *whistles* 5-6 kids come up to me and are like what is that.

500,000 without hits is the only one I'm missing off easy. The 100 powerups is non specific. It means whichever 100 powerups are dropped in a row, if you collect 'em you get the zoot. You don't have to limit yourself to only one kind of powerup.

Wow, this game is just incredible. The guys at binaryzoo have certainly outdone themselves. This is Asteroids for a whole new generation. Can't wait for the online scoring. Keep up the good job!

Uhh, did anyone else have problems with getting the game to actually start? I started a game, and I'm just sitting there, moving my ship around, and no enemies ever seem to appear, and I can't shoot. WTF am I supposed to do?

Does anyone have advice on getting "To X score without moving"? This is very hard for me, even when I tried aiming with mouse (the keys restrict to 8 directions); no movement excludes you from power ups, as far as I understand, and those levels with that pea shooter without even being able to dodge seems far too hard (even on easy). Am I missing something, or is this zoot just plain hard?

Two tips for scoring without moving:

On easy and normal levels, if you allow a small rock to hit you, your weapon will be upgraded. You should be able to upgrade your weapon fully, and still have plenty of health to get the score you need. Any time you're not going for 500k without being hit, this is also a handy shortcut to make the start of the game much quicker.

On any level (but only worth doing on hard, because the first trick is easier and quicker), the collision detection is more generous for picking up powerups than for colliding with rocks. Shoot a small rock when it is very, very near to hitting you and you'll pick up any powerup it drops without needing to move. This takes time and patience, and you might only get a few weapon upgrades, but even one weapon upgrade is enough to give you a chance at the 175k.

The site is down, it would be great if you guys could mirror it or something. Awesome Game!

Never mind my earlier post, I got it working.

I have the same problem, my ship moves around but no asteroids appear, I think its a bug.

Anybody playing this gem?