In Dancing Dragon Games' indie RPG Echoes of Aetheria, knight Lucian, the adopted son of a Duke, is caught in the middle of a bizarre conspiracy... specifically, kidnapping the royal bride-to-be at a wedding ceremony that was supposed to bring peace between two warring nations. Lucian's been branded a traitor and a terrorist, but with the help of clever mechanic Ingrid and the not-so-damsel-in-distress-y princess Soha herself, he might be able to prevent a plot to incite war... provided they can all clear their names and avoid getting assassinated in the process. Echoes of Aetheria is a gorgeously presented and professionally polished JRPG-style adventure with engaging combat and snappy writing that may have some familiar tropes, but seeks to elevate them rather than merely dress them up or call it "good enough". 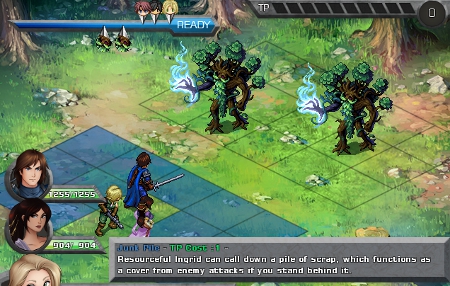 Combat is turn-based, though you'll see enemies on the map before you encounter them. As you trade blows with opponents, you'll gradually accumulate technical points that can be used to trigger special abilities, and where you place your characters in combat has a big impact on the damage they receive and deal. Using certain abilities can even stagger enemies, preventing them from attacking. As your characters level up from earning experience, both by winning battles and exploring areas, they'll get more powerful, of course, and unlock new abilities. You'll typically have to pick and choose what skills a character takes into battle until you unlock more active slots, rather than having them all available, all the time, but the ability to reallocate skill points to enhance your existing abilities whenever you please is nice. Crafting is fairly important, so you'll need to use the materials you find at anvils to beef up your equipment. Instead of simply gathering a specific laundry list of items to make a specific thing, you'll typically be able to pick and choose from various elements and other items for various parts to change its final stats. Plop on some augments on slotted items to improve them further. The game is split up into chapters that move from place to place, and typically the main chance to resupply and craft is at whatever base your characters are camped at, so take the time to talk to everyone and suit up before advancing the story! 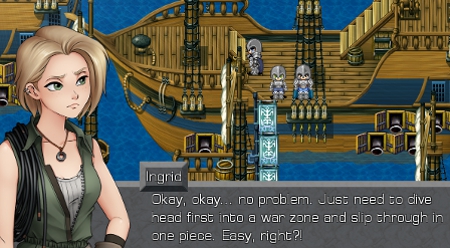 The fact that it kicks off so quickly, shunts most of the informative world-building into text walls behind an optional journal menu, and hits several familiar JRPG tropes right off the bat, can make Echoes of Aetheria a little difficult to get into initially. Despite some predictability, however, Echoes of Aetheria embraces its roots and spins them out in the best way possible. It's not just that it looks gorgeous, though its area design, battle sprites, and character portraits are all top-notch. Echoes of Aetheria moves at a brisk pace, sweeping its cast from place to place as it drives its plot without wasting time. Figuring out who's manipulating who is just as important as clearing Lucian's name, but there's a real emphasis on character building. As they deal with the horrors of war and get to know each other better, they start to become much more fleshed out, and it's easy to get get invested in them. And hey, major points for avoiding turning the Princess into an ineffective damsel or the token "fiery" spunky female... Soha is intelligent, capable, kind, and resourceful, and she's more memorable for it. 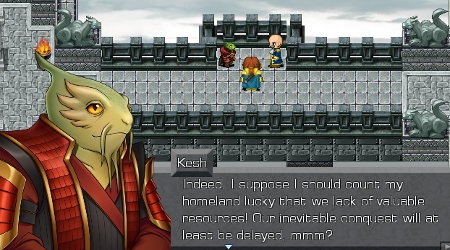 While the turn-based combat is mostly straight-forward, certain abilities that require a little planning to execute effectively add a nice element of strategy, such as Ingrid's Junk Pile, which forms a protective wall in front of you if you have the space for it, or Soha's healing and powerful attacks, which come at the cost of her own health. Party formation can have an enormous impact on the difficulty of any given encounter. Putting Lucian in front of someone means they'll be protected, for instance, but it also means he's soaking all the damage, and he's not invulnerable. It forces you to plan and use skills carefully, especially if you choose the higher difficulty setting for each chapter, rather than mindlessly spamming attacks. The gameplay is actually nicely split between combat and exploration, though a lot of the puzzles come down to flipping switches in some capacity. Maybe the world shouldn't rely on a button-based security system? It's not that they aren't fun to explore, especially since that's how you get the best loot, but the meandering, labyrinthine set-up of every single area, be it train, castle, or otherwise doesn't do much for the plot, since no area really resembles any sort of coherent architectural design. Everyone else is all worried about the war, and I'm just concerned as to how any society built on 90% random switches, corridors, and dungeons can have any sort of economy. How do the children get to school? Does it involve three spike puzzles and poisonous spiders? Won't somebody think of the children?!

Teasing aside, Echoes of Aetheria is that rare JRPG-styled game that manages to be true to the genre while getting rid of a lot of common annoyances... there are no random encounters, no grinding, battles are strategic, and at one point, I discovered the Roast Beef of Might, which was both confusing and awesome. Echoes of Aetheria blends familiar elements with great characters and storytelling, cooks it up with engaging combat, and adds a dollop of fantastic presentation on top. While its worldbuilding could be better integrated and it may take a bit to get into, this is a great example of how much life there is to be found in "classic" styled RPGs if you have the talent and passion to tease it out.