Wake up! You've been asleep too long. Now your world is dying at your own feet, and you're the only one who can fix it. So begins the premise in the beautifully rendered platformer slash narrative that is Echoed World.

In the beginning, the creator made a final decision, splitting his power into seven parts known as the Architects of Life. These entities were bestowed with the power to create life. Each of them was given their own world on which to create and do as they pleased. Many of these worlds flourished, with a rich variety of life sprouting up and thriving in a variety of different environments on the many planets. But one of these planets was different and remained dark. Try as he meant, its creator and obsessive perfectionist Tyr could not seem to inspire any life on its desolate surface. Staring at the other planets, Tyr's resentful soul bubbled up, until he came up with a cunning plan. If he couldn't bring life to his own world, surely he could seize another world and bring his vision to fruition on theirs.

And so begins the story of our protagonist Algiz, trying to salvage what remains of his world. Unfortunately for him, it seems he has lost his main power: to bestow life upon his surroundings. The only bit of good news is that even though he has lost his ability to create life, he still has a lesser ability: to take it. You are able to soak the life out of the few remaining vessels on this world and redistribute it as necessary to progress through the puzzles and impediments Tyr has left especially for you. There are traps such as pits of sharp spikes and creatures that will try to destroy you should you touch them. Presumably these were once beautiful inhabitants of the world Algiz created corrupted by Tyr as he slept.

The strength of Echoed World lies more in the narration side of things rather than the platforming aspects, but it still delivers a great storyline (especially with the opening cutscene) and well-developed levels. For a monologue given purely by one narrator - presumably, the original creator of the seven Architects who forfeit his power to act only as an observer in the current time setting - it does an excellent job of highlighting the story and walking you through as you play through and discover the mostly-destroyed world of Algiz. I feel it might have benefitted further if Algiz and the narrator had a back-and-forth type dialogue and taken it to another level. As it is currently, there's not much character development on the part of Algiz and he/she/it falls rather flat, which might not have been the intention. 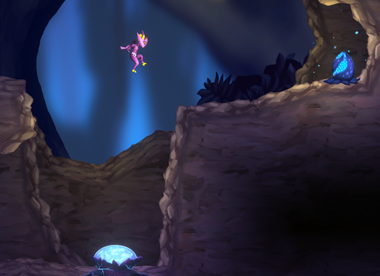 To play Echoed World, use [WASD] (or alternatively, arrow keys) to navigate, along with [Space] to jump. You can also use [Space] to flip yourself up and onto a ledge from "eye level" if you are hanging off it. The platforming can be a bit weird and you can find yourself moving in a way I can only describe as "slip-falling" off the edge of objects occasionally, so you may find it necessary to attempt some jumps more than once to get it right. You'll also need to use [X] to drain plantlike life of its energy, and use the same key to deposit in to make other plants grow or in repositories demanding energy to allow you to progress to the next area. There are also a number of collectibles lingering around the world that you can interact with - and for the dedicated, perhaps try to collect them all. You'll encounter a few other obstacles, such as needing to trap/kill the minions that come after you later in the game, and running into crates to push them to push buttons, open doors, protect you from harm's way, and so forth. 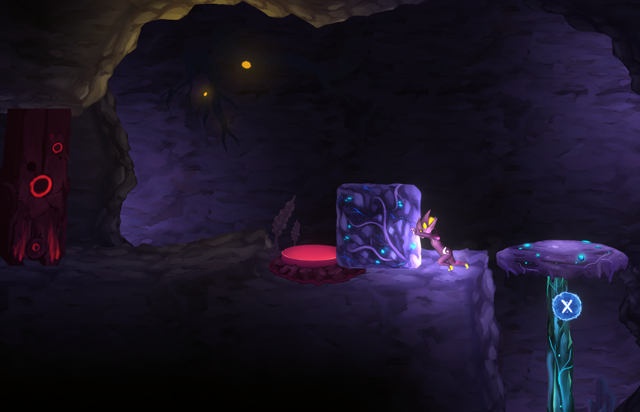 Echoed World's aesthetics are also excellent, with beautifully rendered hand-painted backgrounds, and a nice soundtrack accompanying the game. The voice acting is superb, and subtitles along with it are a nice addition despite a couple glaring typos. Although it may not appease sticklers for platformers with tight, solid controls, nothing in the game requires strict enough timing or precision for that to really be an issue, and it definitely brings its A game in heart and soul. So if want an immersive adventure without a cliché ending by a team that knows how to weave worldbuilding into a compact package, this may well be a game for you.

Love point and click downloads but, being arthritic, avoid WASD navigation. In description where pointnclick, free, etc are... WASD could maybe be added. Was mid-download when realized WASD, bummed I can't play. Looks so nice.

For Echoed World, you can actually use the arrows as an alternative for WASD to navigate. (I just loaded the game to confirm.) I will update that in the review as well to clarify it for future readers.

Also if that's a persistent issue for other games, you might be able to use a program like Uncap to reassign your keys temporarily to help you play those that only offer WASD. But I'll try to keep in mind to mention more details in the control schemes in the future.

I enjoy the game, the art, and the story. It was too short; I completed it in a couple of sittings.