When they came, the Earth changed. Their weapons were deadly, but their ecosystem modifiers were worse. Clear skies turned into clouds of poison. Thousands of species of animals went extinct, and the human race is close. You, though, are a survivor. Always have been. But the surface world is deadly, and you need to find shelter soon. Earth Taken is an action platformer by SeethingSwarm that casts you as the desperate measures that the desperate needs of an alien menace require. 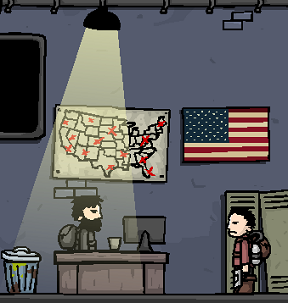 Move with the [arrow] keys and jump/double jump with [S] making your way to the objective or safe-house at the end of each level. Vehicles, exploding barrels, and other shootables (not to mention all the aliens that will find you and will kill you) can be taken care of by firing your gun with [A], reloading when neccesary with [R]. [Spacebar] enters doors, loots dead bodies, and performs a melee attack on enemies. Throughout the landscape, supplies can be collected, including health-packs which can be traded in at outposts for upgrades, or consumed with [E] for a quick recharge. The air in the environment is toxic, so make sure you have enough gas mask filters on hand to avoid the hit to your health. Found survivors will join you as allies, and will be quite useful in a fight. There are eleven levels in all, each one bringing you closer to the truth as to how the invasion can be stopped.

Earth Taken sometimes feels like an action game in the body of a survival horror game: while there is a great deal of running and/or gunning, the emphasis on health and equipment management, limited ammo, and tough enemies certainly suggests the latter. Not to mention there's the influx of vaguely threatening graffiti and the whole "maybe the real monsters... are us" undercurrent to the plot, which is getting a little overdone by now. However, even if Earth Taken is a bit of a mish-mash, it is an incredibly addictive one, and scores points at the very least for going with extraterrestrials as antagonists rather than the undead. The developers use an effective palette of purple and greens to create a landscape that oozes with toxicity, and the fact that the game keeps track of every alien, light, trashcan, or dire crow you blast is very satisfying. The whole thing ends a little abruptly, with the Earth still a little, y'know, taken (sequel please?) but overall, Earth Taken is a solid scifi romp that action fans will be quite taken with.

Controls are TERRIBLE! Could they not have mouse aim & left click to shoot with space to jump and CTRL to use?

Seriously, wow, that's awesome. It took me a long, long time to get used to the mapped controls. Once there, twas satisfying, like my staple favorite Zombies Took My Daughter except with a more complex landscape. Narrative drives forward, the levels are interesting, the escort mission isn't *too* bad, despite the walking into mines deal. I mean, you can heal your little followers, sweet.

Apparently the magic restroom fountains are just for you? Not any roadside restroom I've ever seen... maybe the next chapter will be dysentry...?

Aiming is probably the most challenging control, if there were a quicker way to set aim before firing that would save a lot of ammo. I'm not too fussed with the control system, as it introduces a touch of realism in that your multitasking won't benefit from mouse clicks in the apocalypse. No, not even Will Smith.

I am terrible at boss fights, though, so if anyone's gotten that far, I'd appreciate some pointers.

Oh, key survival tip which I elect not to put in spoiler tags:

Some dead alien suits will explode.

Documented somewhere on an alien blog called Bug or Feature.

Can't decide whether it is worth trying to finish the boss fight or not.

Hints for the boss fight:

Don't waste bullets on aliens - I think they just keep coming. If you manage to get on the platform with one or two aliens below you, don't kill them. Two aliens seems to be the most that ever come at once. So stay on the platform with the alien(s) below you, and move around to avoid the UFO's killer blue beam. Keep jumping to empty all your clips into the UFO. I guess that's the solution that's required but can quite decide if I want to play through the last level again to try it out. (I ran out of bullets figuring this out first time around. Low attention span and all that.)

Ok. I did get around to repeating the last scene, and the above strategy worked. I had to buy maximum bullets from the shopkeeper just before the last boss screen and pretty much empty three whole weapons and a bit of the fourth into the UFO before it crashes. (I think I killed about two aliens along the way - so some wasted bullets.) You definitely start wondering if you're doing the right thing after a long period of shooting with no obvious effect however! I started wondering if there was some trick I was missing, but no. Just brute force is required. And patience.

I do wonder if it is possible to get through the last screen with two survivors. Anyone done this? For 'survivors' they seem to have little survival instinct. They just run straight into any battle (or straight into large obvious landmines), never mind the odds, guns ablazing, with no thought to their own personal safety. I think the alien apocalypse must be getting to them. Getting those dudes through the last boss level must be impossible.