The humans are still struggling against the alien race that conquered the earth. With poisonous air, radiation leaks, alien beasts, mecha suits, and spaceships, there doesn't seem there is much a human can do with a handful of ammo and a pistol. But if you played the original Earth Taken, or the sequel ,you know that firearms and food rations go a long way. That's right, SeethingSwarm is back with a new addition to their action adventure scifi shooter, Earth Taken 3. All of the mechanics have stayed the same. Move with the [arrow ]keys, fire with [A], jump or double-jump with [S], reload your weapon with [R] and switch between them with [Q]. There are still trash cans and dead bodies to search with the [spacebar], and cars and barrels to explode with a couple of shots to give you the upper hand when you're going head-to-head with the aliens and brainwashed humans. There are more quests to be done, upgrades to buy and achievements to figure out. Keeping with everything we love there are plenty of secrets to find, allies to join with and endless alien butts to kick. And with a new character creation, you can do it all in your own personal style. 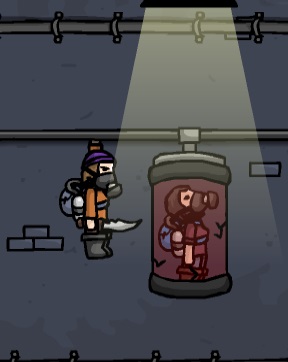 Earth Taken 3 doesn't really put anything new on the table besides story. If feels almost like the next episode in a TV series. A lot is the same, but the story is progressing. Usually for a game this would be given a slightly disappointing look while playing through, but the Earth Taken series has always been strong with action and very story focused, though this new installment feels much shorter than the its predecessors and almost feels as if it's just there to set up for either a finale or a big twist in the series. Perhaps it's just a refresher of the series before the next one is released. Still it's a heart pumping game as you never know what's on the next screen that wants to eat your face off. With enemies literally jumping from the sky and battles fought in tight places it's still to keep you pulled in just as the others did. The A.Is on your side are still a bit clunky and don't really have any tactical skill. When you want to sneak up for an instant kill on a foe they'll support you by shooting at your formerly-distracted target. But the difficulty is still high and you'll always be glad for the extra hand as you try and help the humans recover their home world. So while Earth Taken 3 may just feel like an expansion of the other two games that doesn't mean it doesn't pack the punch and enjoyment the other games hold.

An easy way to beat the final boss

stay at the side of the screen, once the mother shop summon an alien, move to another screen and repeat shooting upward