Bloober Team's Layers of Fear, an indie horror adventure game currently available through Steam's Early Access, is not the sort of game to play alone, late at night, in the dark. Unless you like that sort of thing, then it totally is, you wonderful, like-minded sicko. In it, you play a bitter painter tormented by his failures, grimly bemoaning his fate and cursing life one stormy night. Initially the mood is somber and reflective as you explore, the house littered with broken bottles and scattered letters, but things begin to change. Subtly at first, but then with a greater sense of urgency and wrongness, and the more you look around, the more it becomes apparent that something happened here... but what? Use [WASD] to move around, holding left [shift] to move a little faster, and the mouse to interact. The game uses physics-based controls... click on a drawer with an icon to mark it as interactive, for instance, and push or pull the mouse away from yourself to slide it open and shut. If you find an item you can carry, like a key, it'll be used automatically when you click on the object that needs it. The farther you go into the house, the darker things get, and every door and new corner only gets you more and more lost. Layers of Fear is a macabre, beautiful horror game with finely crafted scares, atmosphere, and a disturbing story to match that focuses on the dangers of obsession, though its "on rails" experience and limited gameplay may not be for everyone. 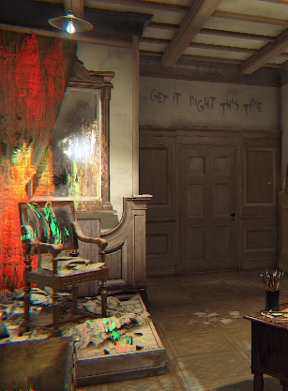 When you first start up the game, your main objective is to get into the studio, which simply involves going upstairs and retrieving the keys from your office desk. Thereafter, it's a matter of figuring out how to move forward, mostly by exploring the house and seeing what changes as you do. A door that was open one moment may lock behind you the next, or lead somewhere entirely different when next you go through. Even just lighting a candle might cause reality to distort around you. It's disorienting, and it keeps you on your toes. It's simple gameplay, gameplay that's framed largely around leading you from one experience to the next, but it largely works. One of the frustrations is that you can't tell just by looking at something whether you can interact with it. A letter that can be picked up and read has nothing to differentiate it from one that can't, for instance, so you need to strut up to everything in a room just to see whether the contextual interaction prompt will appear. It's a minor annoyance to be sure, but still an annoyance... why can this drawer be opened and not that drawer, if this drawer has nothing inside it? While there are a few things you could call puzzles, but they feel almost perfunctory. Layers of Fear is largely an on-rails experience that leads you from one place to the next without ever letting you fumble, which is great for players who are keen for a well-crafted journey that knows where it's going, but maybe not so much for those who prefer to take the reins themselves. There's no real danger to you, and no way to lose the game, so the sense of urgency and menace isn't quite where it would be if the stakes were higher. 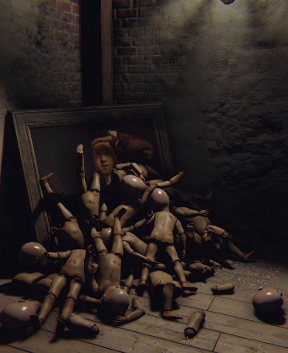 The game is, put simply, gorgeous, with beautiful use of light and shadows that play across your surroundings, and beautifully detailed environments. I spent a while just wandering around, being mildly mystified at the bizarre limited spice supply (seven massive mason jars of sugar, five of paprika, and four of oregano if you're wondering... I counted), and enjoying the way the house felt like an actual home instead of a set piece. But what's impressive is how weighty and physical Layers of Fear feels. The way the camera shifts with your character's movement, the way iron doors pull open more heavily than wooden ones, all of it makes for a surprising physicality that adds a layer of immersion. Most of the story is implied in the things you can find scattered throughout the house, rather than being delivered to you by any direct form of narration. It's subtle without being vague, ominous without being glaringly obvious. It feels and plays a little like Gone Home, only I cried at the end of Gone Home, and while playing Layers of Fear I went "NEH!!" and frantically alt-tabbed out. That being said, the story is fairly aggressive on the foreshadowing if you pay attention to details, so even though certain plot points have been left out of this early release, it ain't hard to see where it's going. In some places, it's like the developers placed just enough story hints, hesitated, then placed one or two more too many to really keep the air of mystery intact, though it's still appropriately creepy and disturbing throughout. It's also worth noting that the story is something they plan to tweak while in Early Access, and since some of it is still missing, I may very well end up eating my words. Wouldn't be the first time! 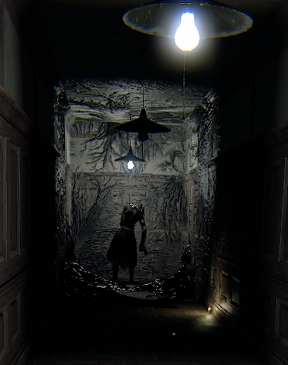 Layers of Fear has been compared to the now-defunct Silent Hill P.T., a claim I can sadly only examine second-hand by watching YouTube footage of it, but if you pressed me to tell you what thing Layers of Fear was most like, I might more smoosh copies of Amnesia: The Dark Descent and Eternal Darkness: Sanity's Requiem together. There are plenty of moments that will raise the hair on the back of your neck, like a ball rolling down the stairs towards you out of a partially opened door, or a crayon drawing tucked away in a shadowy room. Even the stumbling reflection of the protagonist you can glimpse in a blurry mirror is unsettling. Looking away from something for a split second and then turning the camera back can bring significant changes to the scenery, and at times you'll find yourself struggling to make sense of what you see, or what's happening around you. At one point, turning around to find a door that had been shut open a crack, I scared the bejeezus out of myself by locking eyes with an expertly placed creepy painting, no sound effects or sudden images needed. That's not to say the game is constantly changing around you, though when it does, it's executed very well, and there are a lot of good ol' fashioned jump scares to experience as well. Layers of Fear keeps you feeling off-balance, and mostly always moving forward, so you rarely get time to adjust. Everything gets more intense as you go on, graduating from relatively simplistic scares and surprises to some absolutely brilliant distortion of its set pieces and camera work that make up for some of the cornier, more predictable elements. It isn't often that a game can literally make me jump, and Layers of Fear accomplished it more than once.

It's almost more like being a character in a movie than anything else, and there's a distinctly cinematic flair to Layers of Fear's pacing and the way it knows how to direct your attention, showing off every creepy crawly to its very best angle. Taken as such, it's easy to recommend for the way it constantly keeps you on edge as it unveils, well, layer after layer of its story and setting in a way that does genuinely feel like a descent into obsessive madness. From a gameplay point of view, however, it is extremely repetitive, often consisting mostly of moving through door after door, finding out which door is now mysteriously unlocked when it wasn't just moments before, and I found myself wishing I had more agency as a player in the events that unfolded. Layers of Fear's development team is currently soliciting more feedback to better direct the finished product, however, so it's entirely possible that its gameplay may wind up more fleshed out. The game sits at an estimated 75% completion, and more interaction is on the list of things the developers want to add with input from their players, though you might want to keep in mind that they also plan to raise the price as they patch in more content in the coming months, so if you're waffling, buying sooner than later may be cheaper. Ultimately, Layers of Fear is an imaginatively frightening, morbidly gorgeous game, and easily recommended for that alone if you like your things that go bump in the night a little too close to home for comfort.

It really is gorgeous and some really nice ideas in messing with environment.
Biggest weakness to me were the, uh, less subtle portions

namely things like the shaking female shadow that's lifted straight out of PT, or the rather cheesy messages written on the walls which could come from any newgrounds flash game

It's a really cool theme with a lot of potential, not flawless but I quite liked it, and that's coming from someone with no patience for your usual jump scare games

Yeah, I would definitely agree with that assessment. Sadly, I never got to play PT (anyone going to donate me a PS4?), but some of the scares here felt trendy rather than appropriate to the setting, if you get my drift. There was a room I went in that was super dark, and when I looked at the easel, it had a portrait of a smiling old man that looked SO creepy in the shadows that my skin literally started crawling even though there were no jumpscare elements... it was far more unnerving than some of the more (effective!) Hollywood style scares. I think it's neat that they're using Early Access to learn more about what people think of the game and work that feedback into the finished product, and I look forward to seeing where it goes. :)