Currently available in Steam's Early Access program, Red Hook Studios' Darkest Dungeon is a misery simulator masquerading as a dark turn-based strategic RPG. You've been called back to your ancestral home after a relative dug too deep beneath it in search of rumoured riches and instead awoke something evil and foul that tainted not only your sprawling manor but the land for miles around. As you delve into dangerous places to search out and destroy the darkness within, the expeditions take a toll on the heroes you've hired, both psychologically and physically. Their sanity will begin to gradually erode due to the horrors they encounter, not only making them weaker, but also warping them as they despair. They'll gain quirks that impact them and those around them, turning on one another, growing more cowardly or irrational, and even time at rest in town between quests might not be enough to make them recover, and of course if they die on a quest, they're gone forever. With a gorgeous visual style and grim, claustrophobic atmosphere, Darkest Dungeon is a striking and immediately engrossing game with a fantastic premise, though its relentless difficulty may at times border on the unreasonable. 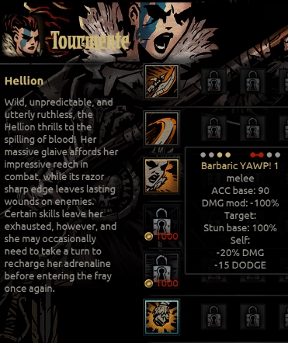 Darkest Dungeon is essentially split into two halves... managing your party in town, and exploring "dungeons" with them. Though you'll initially begin with two heroes, more will arrive via carriage as the game progresses, and you can take any of them with you that you want. The town's primary function is to provide a place for you to leave your heroes and hopefully recuperate when the stress of the job gets to them. Leaving them to do things like gamble, drink, or even pray can lower their stress level, though it means they won't be able to come with you on your next quest. While many of the town's functions are locked initially, they'll open up as you play and provide more benefits for your party, from a blacksmith that can upgrade weapons, to an asylum that can treat some of the nastier personality disorders your heroes can come down with.

See, Darkest Dungeon is largely all about your heroes' state of mind. They can have negative or positive quirks that influence different things in the game... a character with a thirst for gold can barrel right into traps in their haste to open chests even if you don't order them to, while someone with a hatred for a particular monster type will deal heavier damage to them in combat. If a character's stress level rises too high, they can come down with dangerous mental afflictions that can make them a liability and change how they play, such as an irrational character refusing healing on the basis that they're "immortal". Many of these traits also come with stat penalties, crippling your heroes' usefulness. Giving characters down time in town can remove some of these issues, but also create others. 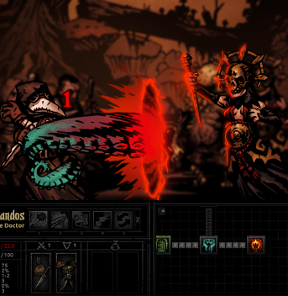 When you're on a mission, the game switches to a sidescrolling format, where you choose which room on a map to travel to, and move your characters through each location on the way there. The light level represented by the torch at the top of the screen is important, since when its low monsters are stronger and your party gets more easily stressed. To combat this, bring torches from town along with other provisions like food and healing items. You can find treasure or traps as you explore, and of course, you can find danger. There are (currently) nine different character classes, such as the Grave Robber or the Leper, and all of them have different abilities that can come in handy during combat. Your characters' formation influences what attacks they can use and where, since someone who's a melee fighter can't reach anything if they're at the back of the row. Even if a character's hit points reach zero, they aren't necessarily down for the count, though every attack that lands thereafter has a chance to permanently kill them if you don't heal them before then. 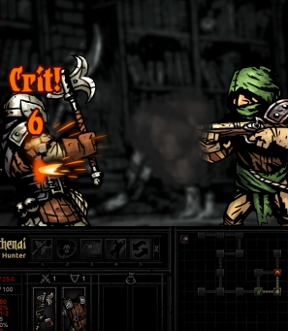 From a mechanical standpoint, Darkest Dungeon isn't hard to pick up, though there's a deceptive amount of depth behind its simple controls. Combat is challenging in a very satisfying way thanks to the wide variety of skills and abilities your heroes can have and the way formation plays into how they can use them. The "death's door" zero health concept is absolutely harrowing, giving battles a tense, tooth-and-nail feel. It forces you to think about who you're taking with you on quests, but also to learn to use every character class as effectively as possible... if your party's positions get scrambled, sorting them back around can be a pain. All of them feel useful and distinct, which is rare, with a great amount of visual variety to their designs. In fact, Darkest Dungeon is, by and large, a gorgeous, gorgeous game for a title about crawling horrors and unshakable, inevitable despair. Its striking shadows and red-soaked art style are an absolute stunner, with a fantastic narration and musical score to boot. Every aspect of Darkest Dungeon gleams with professional polish, and it can be hard to pull yourself away from it once you've started. 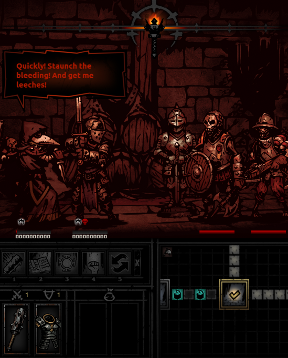 The problem is that at times Darkest Dungeon seems to struggle with balance. It's meant to be a hard game, to the point where it warns you at the beginning to get used to the concept of characters dying, but should it really feel so weighted in favor of that happening? The amount of actions in the field that lower stress aren't just few, they also feel disproportionate in the amount that they heal compared to how constantly and drastically stress is being piled on. A several heroes can take 18 points of stress damage from a critical attack that hits one of them, but landing a critical attack on a monster that kills it may only restore four or five points. This also applies to healing health in general, with very few abilities that are able to restore hit points, and most of those limited to a paltry few when they can. Character traits can even conflict in frustrating ways, preventing a character from getting any stress relief unless you pay to have one removed. There are just so many ways for a character's stress level to skyrocket and start piling on the stat penalties that having to retreat from a quest can sometimes make recovery feel nearly impossible when you need to pay for treatment and supplies for the next trip.

Of course, that brutal, unyielding difficulty is essentially exactly what was promised back when Darkest Dungeon was a wildly successful Kickstarter project. It's meant to be a game of hard choices, of battles where you struggle to scrape by, which ironically makes it equally as stressful to play as it is for the heroes to endure. It's not so much an uphill battle as it is an uphill massacre at times, where even the most strategic player can find their group brought low by bad luck. The game is essentially all combat and party management, so if the battles don't sink their hooks into you, then Darkest Dungeon might not be your cuppa. If, on the other hand, you relish the grimdark and a game that fights you back, Darkest Dungeon should definitely be worth a look. In its current state, the campaign mode is endless, with more items, character types, traits, narration and more coming down the road. It's clearly made by a talented, devoted team with an interest in player feedback and balancing, making Darkest Dungeon a great game that stands to get even better. You don't need a goatee to play, but it probably helps.