This is a game site, right? So here are a few interesting facts about dice. A standard die, of course, is a cube with each of its six faces showing a different number of "pips" from one to six. Despite what certain Broadway musical logos would have you believe, the opposite faces of the die will always add up to seven. There are 11 different arrangements (or "nets") of six-connected squares that could be "folded" into such a cube. And one more tidbit: based from these rules Vishnu Vadakke Pariyarath has developed Dynetzzle, a simple puzzle game that pen-and-paper fans will find to be quite the bit of pair-o-dice. 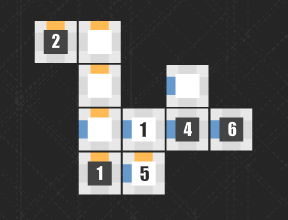 Using the mouse and following the above rules, click the white faces of the presented nets to fill in the correct numbers. Once all the numbers in a puzzle are correctly filled in, the next puzzle is unlocked. Puzzles will involve overlapping "nets", which are denoted by different colors. The concept behind Dynetzzle is quite strong... at the very least, it could definitely stand to be explored further than the mere ten puzzles included in this collection. It has the basic framework of Sudoku, but with a spatial awareness twist that forces you to think in three dimensions. So give it a roll!

Played this over on Kongregate before it showed up here. Brilliant idea. I really wish, given the fact that it is a flash game and not on a piece of paper, there was a way to temporarily "fold" the panels of a single cube together for those of us with severely limited spatial skills. But even with that, I managed to get through all 10 levels in one go, so..not too big a deal, I guess? Would love to see a paper form of this game for sure.

This is a neat game, but I'm glad it's not over 10 levels. As it is, the puzzle doesn't allow for any advanced strategies.

You just have three different sets of numbers, and you can fill out one set without even looking at the other two.

Very nice (and challenging) game concept, plus stylish design. If there were an algorithm that could generate these puzzles, it would be nice to have a 'daily puzzle' website based on this concept. When you have one cell that's part of 3 or 4 different colors, the colors tend to blur and get a little difficult to perceive.

Since there's only so many ways you can un-fold a six sided dice, would be interesting if it's possible to do differently folded shapes - like a triangle folded up into a pyramid, or some non-uniform shapes.

Neat. I agree with the above comments that it couldn't be much longer without introducing some new elements, since by then you've pretty much become familiar with the relative positions of squares that have to sum to 7. As it was, I finished JUST in time to not get tired of the background music (which is very nice).

Really needs a way for us colorblind guys to distinguish between the tiles. Color alone is not going to do it, making the game unplayable. Even though the _idea_ is excellent.

I actually think the opposite. A nice challenge could be to have 2 colors over a number of nets, and the relationships would be between the sides. As is, there could be 3 red left nets and 2 blue top nets, there could be 5 green nets, or even flipped nets side by side. Going clockwise from the top, they could be abab, and the square to the right would be baba.

OOhhhhh. Sorry Phoenix, I did not see at first that you were referring to the colorblind community. A way around that could be to literally have A's through Z's across the bars where the color is, but without color.

Definitely worth playing. The background music doesn't get irritating until the last two levels or so. The fact that you couldn't "fold" the paper made the game more challenging, in a fun way.

I hope that there will be more games similar to this fashion, since the concept is outside of the box.

I found the game fun but after the fourth puzzle as i was getting used to thinking spatially, i found them easier and easier. By the end i was doing the puzzles in about 30s or less, and when i went back to the game to show it to somebody the same day i finished all 10 in under 5 minutes. My memory is junk so i did not solve them that way by the way, so i definitely would like to see a "challenge" mode for those of us with good spacial thinking.

They could add levels with incomplete dice to make it harder. However it would have to be intuitive. A puzzle with limitations so that it is solvable.

Or possibly really hard, more sided die, say 4, 8 and 20 combined. Each side has the same shape, but each die has a different number.