What do you get when you combine a sleek mining game with RPG-style collection and crafting, and a soupçon of puzzle-solving? Well, if you're the folks from Backflip Studios, you get Dwarven Den - The Mining Puzzle Game, an addictive mining mash-up that also happens to have a great storyline and cute-as-a-button artwork. The developer is a master of utilizing the tiny space of the iPhone extremely well, and this game, with so much to see and do, will surely satisfy. 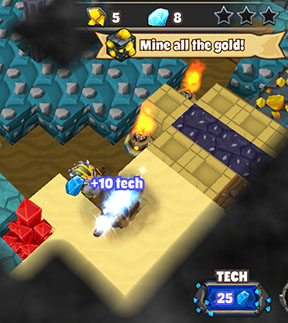 You play a dwarf headed out to excavate the remains of an ancient dwarvish city for, looking for the magical blue gems the place was once famous for. But what's this? In the first ruin, you discover a fellow dwarf who has been stranded in a block of stone for centuries. Now you have a new aim—to release the citizens from their captivity. You do this by clicking on the bits of dirt and rock that must be excavated, and by collecting loot and gold as you go. Each swing of that hammer costs energy, and the puzzle you solve in every level is how to get all of the loot and save the petrified dwarf before your life runs out.

There's definitely more than meets the eye here, as subsequent levels add new elements of gameplay, such as forging, a market, a "fog of war", and eventually guilds. Those blue gems you came for are more rare than a flea on Mars, and they are definitely valuable. Stick with it, and you'll find them—sometimes in special levels and sometimes through guild play. The deeper you delve, the more you'll hope for gems, as they help you buy power-ups. But even without them, you find so much loot that you are likely to be able to create good enough gear to finish any level that is thrown at you. Take two like objects to the forge to create a new, stronger object or buy what you're lacking in the market. The more you upgrade, the better value you will get from blue crystals that help with tech items such as bombs and torches, or from red crystals which provide the energy to continue to mine. And mummies, anthropomorphized treasure chests and a slew of creepy crawlies abound to steal your energy, so watch out! When that energy meter reaches zero, you're dead!

This game does have IAPs, but like most JiG-approved games with microtransactions, they are unobtrusive. Other than that, the only design element that seems less than perfect is the fact that to "sell" an item, you have to be in your equipment menu, not the market, which is a bit unintuitive. Never fear! There's usually enough gold coming out of the den itself to keep you forging merrily away. And like a good RPG, the deeper you go, the better the loot drops become, keeping pace with the difficulty of each new level. With all it's charm, it's variety, it's ease of play and dozens and dozens of levels, you are set for hours of mining madness, even if you take it in little bursts. So strap on your radar backpack and hoist your rune blade. It's time to enter Dwarven Den.

I'm always a little weary of freemium games, but this turned out to be fun. I've never felt pressured to spend real money. And if you join a guild ( I joined FunkyTeam) you'll have plenty of gems.


This is only level I really got stuck on. You may want to invest a few gems on this level.
Tech is very important in this stage, but mostly its about luck and a getting a good layout. Keep your volume ON so you can hear the monsters, you'll need them for energy.

I made it through (after about 40 tries) with:
Study Radar backpack (upgraded)(Tech Cost -25%)
Sturdy Iron blade (Tech +40%)
Sturdy Winged Helmet, (Crystal Foresight +5)

Another option is to farm level 55 until you get 4200 gold and upgrade your Sturdy Iron Blade which gives you +40% tech.