Dusty is out for revenge. You can tell because it says so right in the title! Dusty Revenge is a wild west-themed action game from PD Design Studio that effortlessly blends a sidescrolling beat-em-up (think Castle Crashers) with a simple platform game, turning the whole genre mix on its head by dumping in a lot of guns and artwork that would make even Shank blush. It can be a bit over the top on occasion with its cheesy story and quick combat tactics, but the overall tone keeps you interested in beating up enemies until your lengthy bunny ears are soaked in blood. 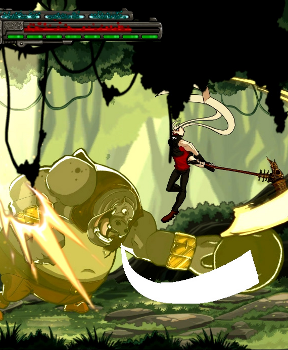 In Dusty Revenge you can deal with the bad guys in pretty much any way you please. You have a few basic moves that include firing pistols, pulling out a shotgun, jumping, rolling, dashing, and unleashing light/heavy attacks. Chaining these together is where your combat strategy will come into play. Simple combos allow you to knock enemies into the air, kick them around the screen, or simply get in a few extra hits before they can recover. The best part is that gaining levels unlocks even more combos, making your frantic button mashing pay off with a svelte array of attacks that actually deal damage!

Progressing through Dusty Revenge's scenic levels is an exercise in precision brawling. There's a limited amount of space to traverse, forcing you to stay on your toes and avoid damage whenever possible. The occasional chest offers health and experience orbs, but most of your time will be spent hopping from platform to platform, interrupted only by a staged fight with a bunch of baddies (or an evil boss).

The storytelling trips over its own ambitions from time to time, falling into the trap of forcing some sort of dark tone but coming off as clumsy instead. The controls also take some time to get used to, even if you use a gamepad. Dusty's signature style of badassery and juggernaut revenge is the perfect complement for the endless combat and gunplay. The real juicy parts of the game take a little time to kick in (why isn't the bear with the massive gun there from the beginning?!), but once they do you'll realize this is much more than a simple sidescrolling punchfest.

I beta-tested this. Gliding with the ears and then dropping into combos is good fun, as is using your auxiliary abilities of your friends (sniper + artillery)when you've filled your power gauge.

Well-worth the price for a good beat-em-up I reckon! :D